Adelaide remain hopeful their All-Australian defender Daniel Talia will be available for round one despite knee surgery sidelining him for the next three months.

The 27-year-old had an operation after damaging his lateral meniscus in an accident at home last week. 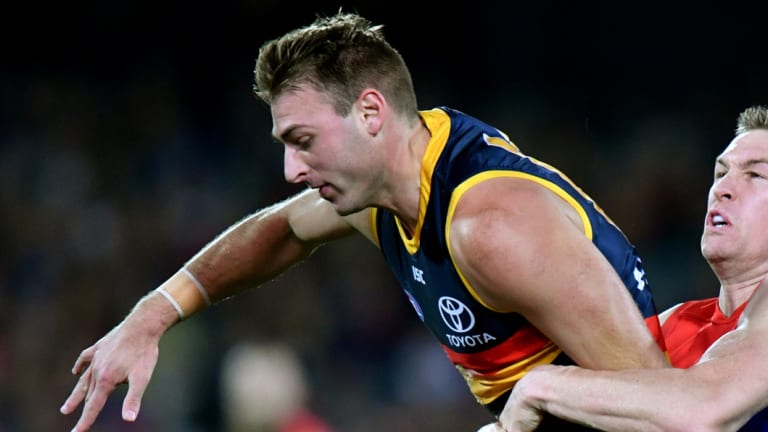 The Crows hope Daniel Talia will be right to play round one.Credit:AAP

The Crows expect him to be back in full training in 10-12 weeks, which means he will rejoin the group at the end of February.

Adelaide high performance manager Matt Hass told the club website he hoped Talia would be in shape to play when their season kicks off on March 23 against the Hawks at Adelaide Oval.

"We are hopeful it progresses as we expect and he would be available for round one," Hass said.

"Daniel is one of the most diligent trainers and will do all he can to be back as soon as possible."

Another tall defender Kyle Hartigan is also recovering from post-season surgery on both knees and his rehabilitation program will continue into the new year.

The Crows are hoping to bounce back from a disappointing 2018 when they finished 13th after their season ran off-course midway through the year as injuries hit and they struggled to resolve lingering issues from the pre-season.

Their chances of rebounding have been boosted by the performance of midfielder Brad Crouch so far in pre-season with the 24-year-old running the recent two kilometre time trial as he builds towards joining full training after Christmas.

Crouch did not play a game in 2018 after suffering groin problems and his presence in the midfield was lost as the team was also dealing with the loss of Charlie Cameron to the Brisbane Lions and Jake Lever to Melbourne.

Midfielder David McKay is expected to resume full training post-Christmas as he continues to recover from an Achilles injury.