Matthew Dellavedova is on his way "home" to the Cleveland Cavaliers but how long his homecoming lasts remains to be seen.

The NBA championship winner was a key part of a multi-player trade between his Milwaukee Bucks and the Cavaliers on Saturday. 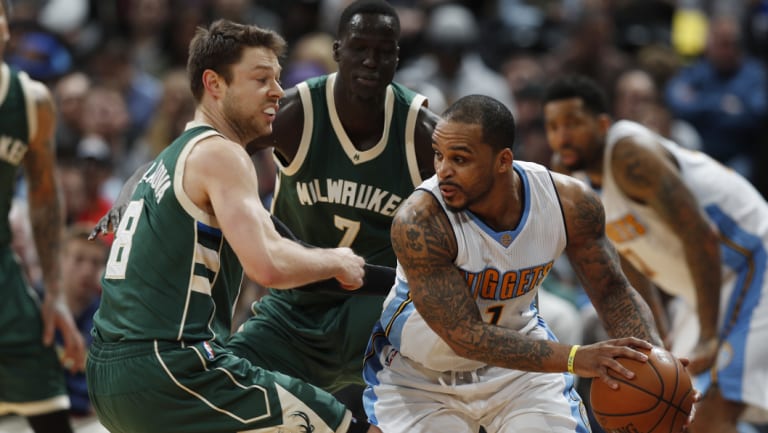 Milwaukee’s Matthew Dellavedova (left) is heading back to Cleveland.Credit:AP

Word broke mid morning Australian time that the Cavaliers were on the verge of pulling the trigger on a deal to bring Dellavedova back to the club he first made the NBA with in 2013.

Cavs general manager Koby Altman thanked Hill and Dekker for their efforts with Hill a starting member of last year's NBA Finals team which fell to the Golden State Warriors.

"First and foremost, I'd like to thank George Hill," Altman said.

"He helped us get to the NBA Finals last year and has been a consummate professional on the court and in our community.

"Both George and Sam Dekker went about their work here with professionalism and class and we wish them the best.

"At the same time, we're very pleased to bring Delly back to Cleveland and want to welcome John Henson as well.

"This deal satisfied several important aspects for us in terms of having both long and shorter term benefits and assets involved.

"We will continue to look for ways to improve and strengthen our position for the future, while enhancing our ability to compete and grow in the short-term also."

The Cavaliers are among the worst teams in the league this season following LeBron James’ move to the LA Lakers and the loss or trade of several other veteran stars, so Dellavedova’s return would be a boost for fans who enjoyed his hustle and tireless work after rising from an un-drafted free agent in 2013 to making their roster.

The Bucks signed Dellavedova to a $38-million, four-year deal after the Cavaliers won the championship in 2016 but this season they have actively looked to move him to free up salary cap room heading into the last year of his deal next season.

The trade gives the Cavaliers an additional first-round pick and a veteran guard to help guide their young stars like rookie point guard Collin Sexton, while the Bucks get a proven guard in Hill and cap room to try and re-sign several young talents including Australian big man Thon Maker.

Henson's departure also opens up more game time for Maker who started the season on the bench but has been playing more in recent weeks.

The timing of the trade was important as it means any of the players in the trade could be traded again before the trade deadline in February, as much as the Cavs love Dellavedova, another team may trade for his contract and send a longer-term contract and draft picks to the Cavs.

Australian fans were debating what number Dellavedova would take up in Cleveland after wearing nine and then eight in his previous stint. Both those numbers and his college number, four, were held by other players so he has selected the number 18.

The Cavaliers play Washington in Cleveland on Sunday AEDT although it's unclear if Dellavedova will be cleared in time to play.