Dee Rowe, a revered figure at the University of Connecticut for a half-century as the men’s basketball coach and athletics department fund-raiser, died on Sunday at his home in Storrs, Conn. He was 91.

His son, Donald, said that the cause was Covid-19, but that he had also received a diagnosis of Waldenstrom macroglobulinemia, a type of non-Hodgkin’s lymphoma.

Rowe (his given name was Donald, but he got the nickname Dee in childhood, and it stuck) coached the Huskies for eight seasons, compiling a 120-88 record as he guided the team twice to the National Invitational Tournament and once to the N.C.A.A. men’s tournament, in 1976.

After defeating Hofstra in the first round of that tournament, Connecticut lost, 93-79, to Rutgers. “We lost because of the way Rutgers makes you play,” he said after the game. “ We just let them play too fast for us. A team like that, that plays that fast, they ultimately wear you down.”

Following the 1976-77 season, when he led the Huskies to a 17-10 record, he retired because of pancreatitis. “I got to the point in coaching where I felt I was the lone matador,” he told The Hartford Courant in 2004. “I suffered too much. I got out at 48. I was burned out.” 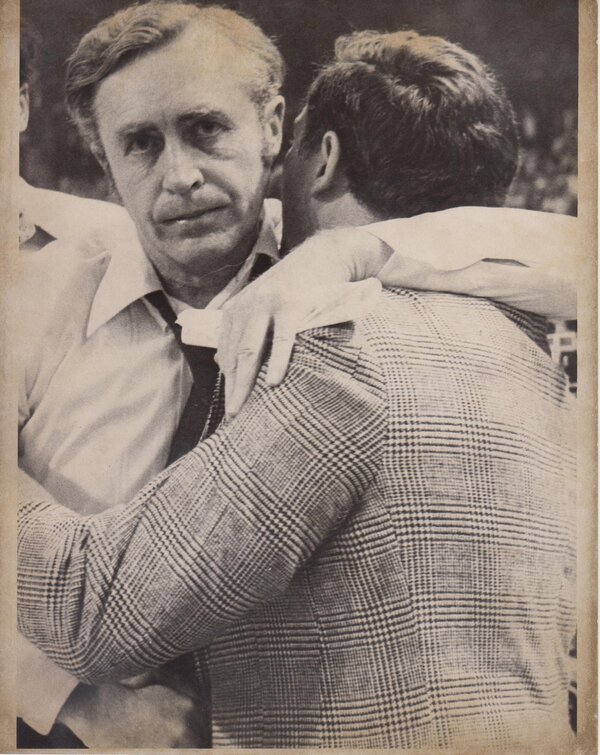 Within a year, he started as the athletics department’s fund-raiser. “He had been offered the athletics director job at Middlebury, and along the way he pursued others, but he was committed to UConn,” his son said in a phone interview. “He wanted to be around it. He was very passionate and was a great salesman. At UConn, he sold from the heart.”

In his 13 years as fund-raiser, an official role, Rowe was best known for collecting about $7 million in private donations to build the Harry A. Gampel Pavilion, the Storrs campus arena. Named after the lead donor, a real estate developer and alumnus, the pavilion is home to the men’s and women’s basketball team and the women’s volleyball team.

After retiring in 1991 he remained a special adviser and helped raise money to build the Werth Family UConn Basketball Champions Center, where the basketball teams practice.

“He missed coaching, and he never stopped trying to get me to play the 2-3 zone and run the stack offense,” Auriemma said. “I never got around to the stack offense, but we once won a game late by going to the 2-3 and I never heard the end of it.”

Mr. Rowe served on the search committees that recommended the hiring of Mr. Auriemma and Jim Calhoun as the men’s basketball coach.

Donald Earle Rowe was born on Jan. 20, 1929, in Worcester, Mass. His father, Minott, was an insurance company executive. His mother, Arlene (Harrington) Rowe, was a homemaker.

He played basketball and baseball at Worcester Academy and later at Middlebury College in Vermont, from which he graduated after transferring from the University of Rhode Island. He earned a master’s degree in education at Boston University, then returned to Worcester Academy, where, over 13 years, he coached the basketball team to nine New England prep school titles. He was also the school’s baseball coach and athletics director.

The team toured the country leading up to the Moscow Summer Olympics, but the United States boycotted the event because of the Soviet invasion of Afghanistan.

“I just remember the shock of it,” Rowe told The Courant in 2016. “It was a great experience but tragic that we didn’t go.”

He got another chance in 2012, when he attended the Summer Games in London in a traveling party with Auriemma, who coached the U.S. women’s basketball team to a gold medal.

In 2017, Rowe received the John W. Bunn Lifetime Achievement Award from the Naismith Memorial Basketball Hall of Fame for his contributions to basketball.

“He has been a contributor all his life,” Bob Cousy, the Boston Celtics Hall of Famer and a friend, told The Courant in 2016. “Basketball gave him a vehicle to do his magic.”