Matthew Dellavedova is excited to be heading back to the Cleveland Cavaliers, the NBA team that gave him his break and a blue collar city that loves his hard-nosed play in pursuit of championships.

Few NBA players would be keen to be traded from the playoff-bound Milwaukee Bucks to the rebuilding Cavaliers, stripped of stars LeBron James, Kyrie Irving and Kyle Korver in recent years and possessing the second-worst record in the league. 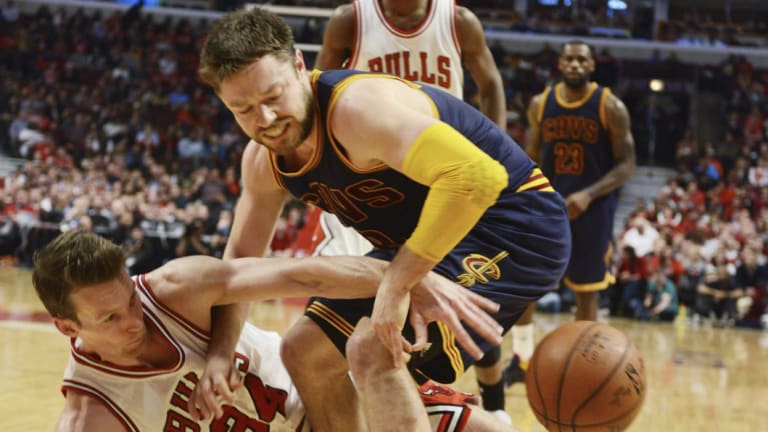 Back with the Cavs: Matthew Dellavedova.Credit:AP

The Cavs have just five wins from 25 games but Dellavedova started his NBA career at a rebuilding Cleveland and will get plenty of court time compared to the bench-warming duties he had with the Bucks this season.

"Cleveland, thanks for the love," said Dellavedova, in a tweet accompanying a picture of his old Cavs jersey. His response came in the wake of the largely positive online messages Cleveland fans showered on the Australian.

Dellavedova's Twitter photo of the jersey exemplifies the Victorian's team-first attitude that was noted by both Bucks superstar Giannis Antetokounmpo and Cavs veteran Tristan Thompson after Friday's three-team trade between the Cavs, Bucks and Washington Wizards was announced.

Dellavedova won a championship with the Cavs in 2016 wearing the No.8, but another Cavs guard, Jordan Clarkson, now has that number.

In the Twitter photo Dellavedova added a scrappy looking number one with tape and a black texta and placed it next to the eight – signalling he will play as No.18 and won't be demanding the "eight" jersey from Clarkson.

Dellavedova, who signed a $US38.4 million ($A53.3 million) four-year contract with the Bucks in 2016, described them as "great people" and thanked the team for the opportunity

"He was one of the best teammates I've ever had; a great leader," Milwaukee's MVP candidate Antetokounmpo told reporters.

"Even though things weren't going as well for him, he was always positive, always tried to talk to all of the guys and kept his spirit up."

One of the few players left on the Cavs' championship-winning squad, Thompson was asked to recall his favourite "Delly memory".

"How he played in our first finals; game three against Steph Curry," Thompson, noted how the Australian stepped up in the 2015 finals against the Golden State Warriors and was later hospitalised with exhaustion.

"He had like 21 points and then he left it out on the line and he had to get an IV after the game.

"So that was a crazy, heroic Delly moment for him.

"I'm glad my Aussie brother is back."

Thompson expects Dellavedova to push Cavs rookie point guard Collin Sexton in practice, just as the Australian did with Irving.

"He brings veteran leadership, a guy that's won before, a guy that's going to push Collin, control the game for the second unit and he'll make shots and he's good at throwing lobs at me," Thompson said.