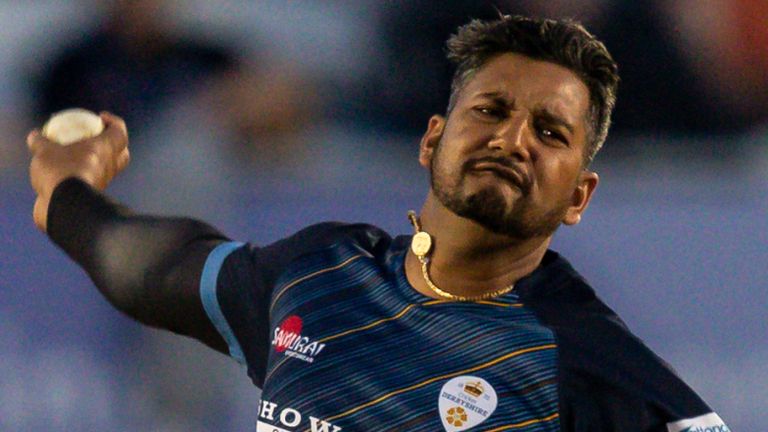 Ravi Rampaul took two wickets in as many balls as Derbyshire Falcons edged out Lancashire Lightning by 11 runs at Old Trafford to join them in the Vitality Blast quarter-finals.

Rampaul (3-19) removed Steven Croft and Josh Bohannon in successive deliveries before returning at the death to wrap up the Falcons’ success and lift them to second place in the North Group.

Derbyshire posted 162-3 from their 20 overs, with Wayne Madsen (69) hitting his second half-century in as many games as he and Billy Godleman (57) shared a second-wicket stand of 112.

The Lightning lost Alex Davies (0) to the second ball of their reply before Rampaul’s double strike reduced them to 33-3 and, despite Liam Livingstone’s 58 from 36 balls, they slid to only their second defeat of the tournament.

Alex Carey blazed 61 from 30 balls as Sussex Sharks swept aside Glamorgan to win by seven wickets and seal top spot in the South Group.

Carey and Phil Salt (27) annihilated Glamorgan’s powerplay bowling at Cardiff as they put on 83 for the first wicket, with Laurie Evans (45 not out) finishing the job to ensure a home quarter-final for the Sharks.