LA Dodgers star Trevor Bauer has been placed on leave after a woman accused him of rape and obtained a restraining order against him.

The 30-year-old's forced leave was announced on the same day President Joe Biden hosted the Dodgers at the White House to mark their World Series win last year. Bauer was not in attendance. 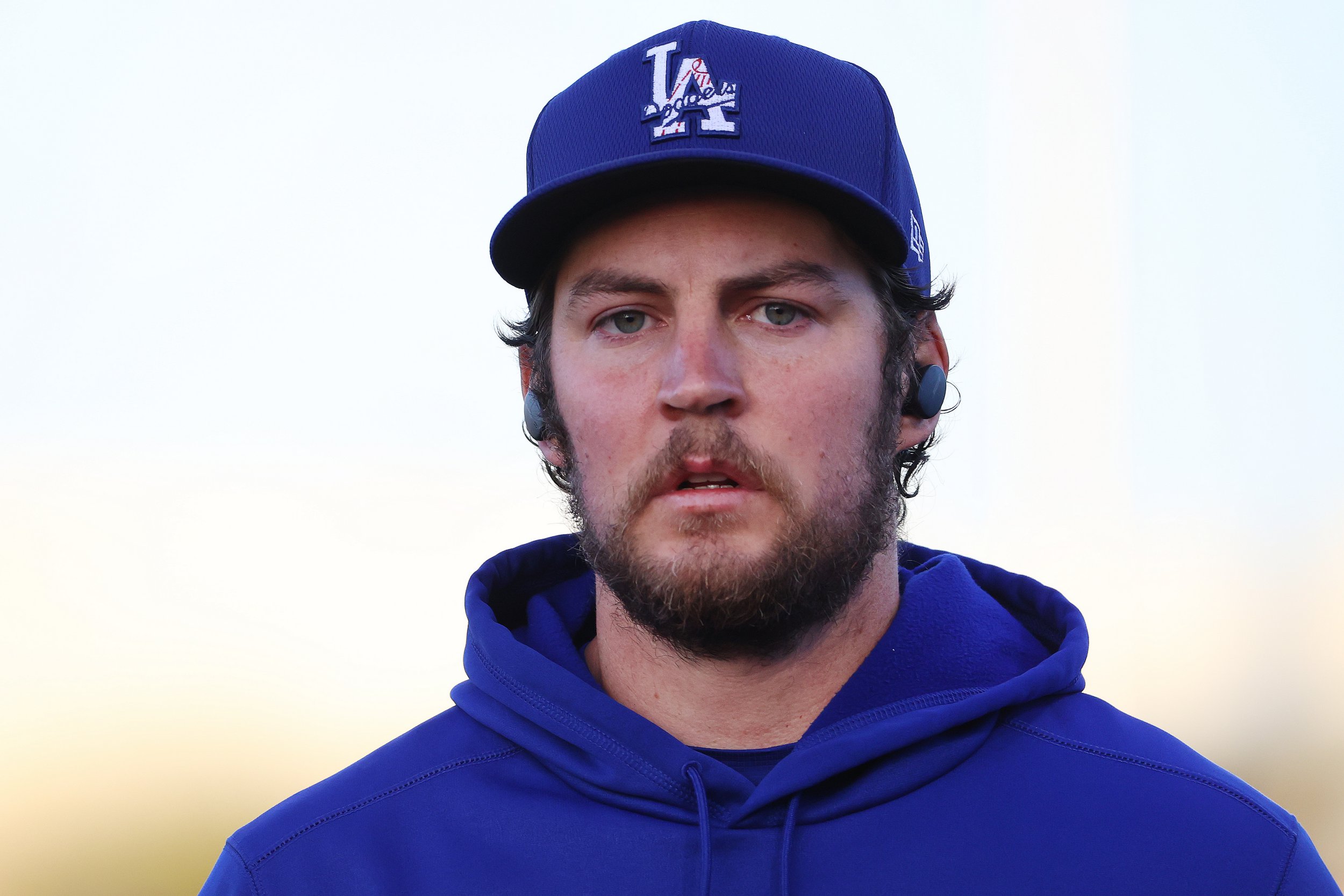 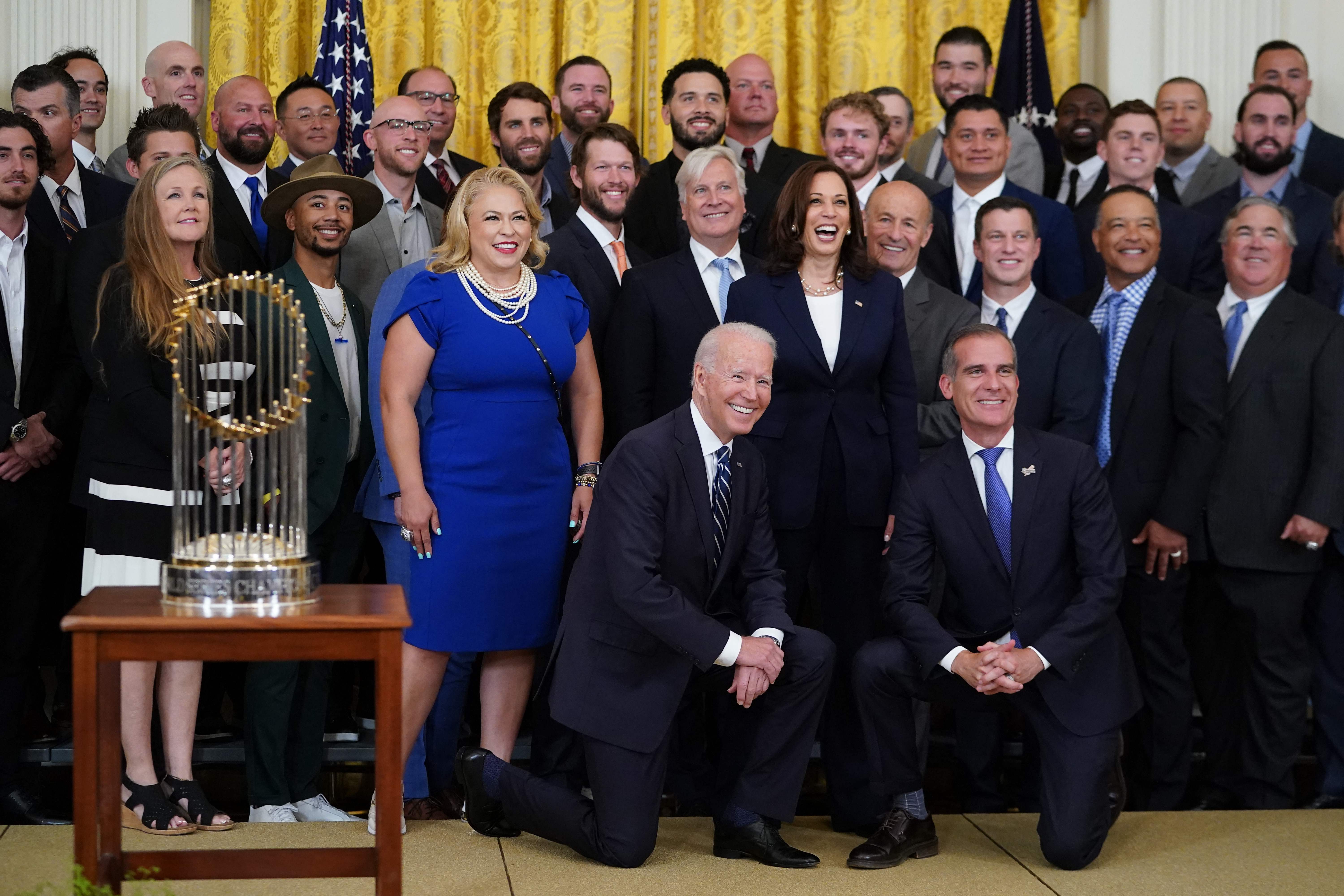 The league can only extend the leave beyond seven days with the approval of the player's union.

A spokesperson for Major League Baseball said the league is investigating the allegations, adding officials have the power to suspend a player even if they haven't been charged with a crime. 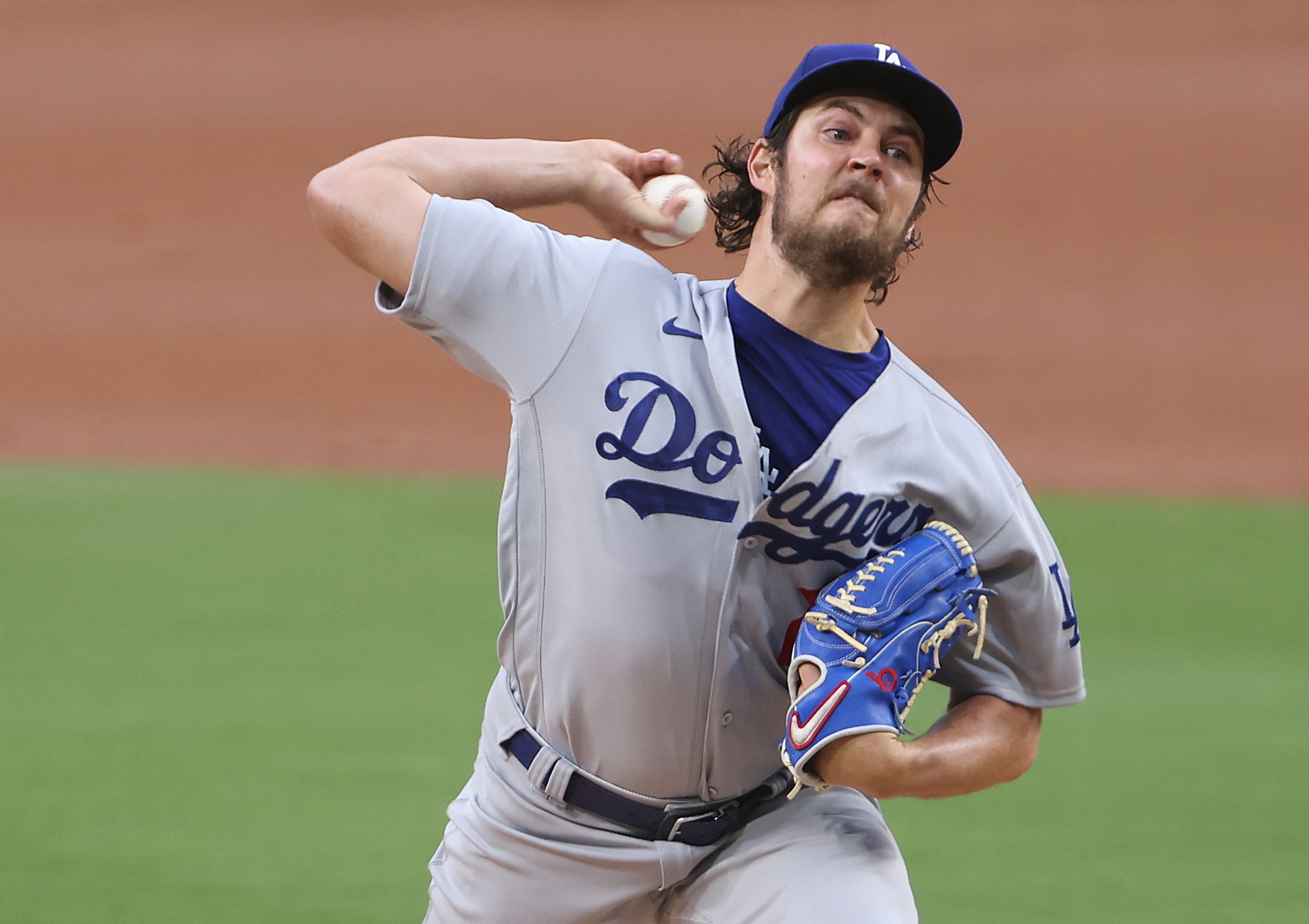 The allegations stem from claims made by Bauer's ex, 27, who has accused the star of choking her until she lost consciousness, punching her in the genitals, and sodomizing her without her permission.

The accuser, identified only as Ms. Hill by her lawyers, claims Bauer inflicted "severe and emotional pain" on her.

Bauer has not been criminally charged but is under investigation by police in California.

He is also the subject of a domestic violence restraining order filed by Hill on Tuesday.

Jon Fetterolf, an agent representing Bauer, denied the allegations in a statement and contested his encounters with Hill were consensual. 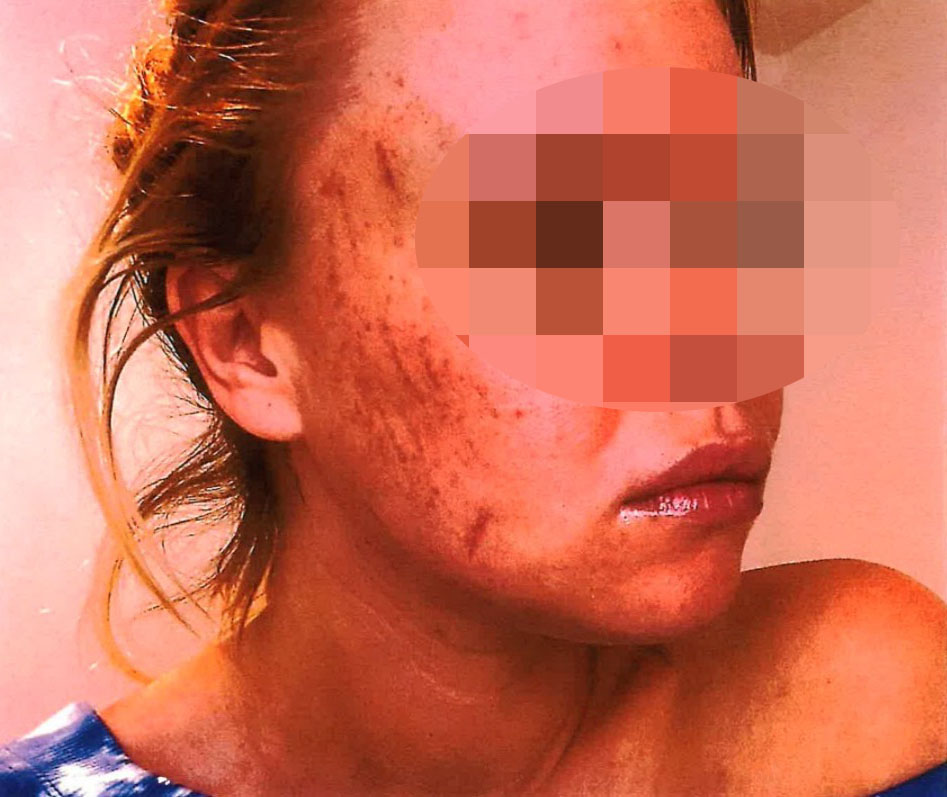 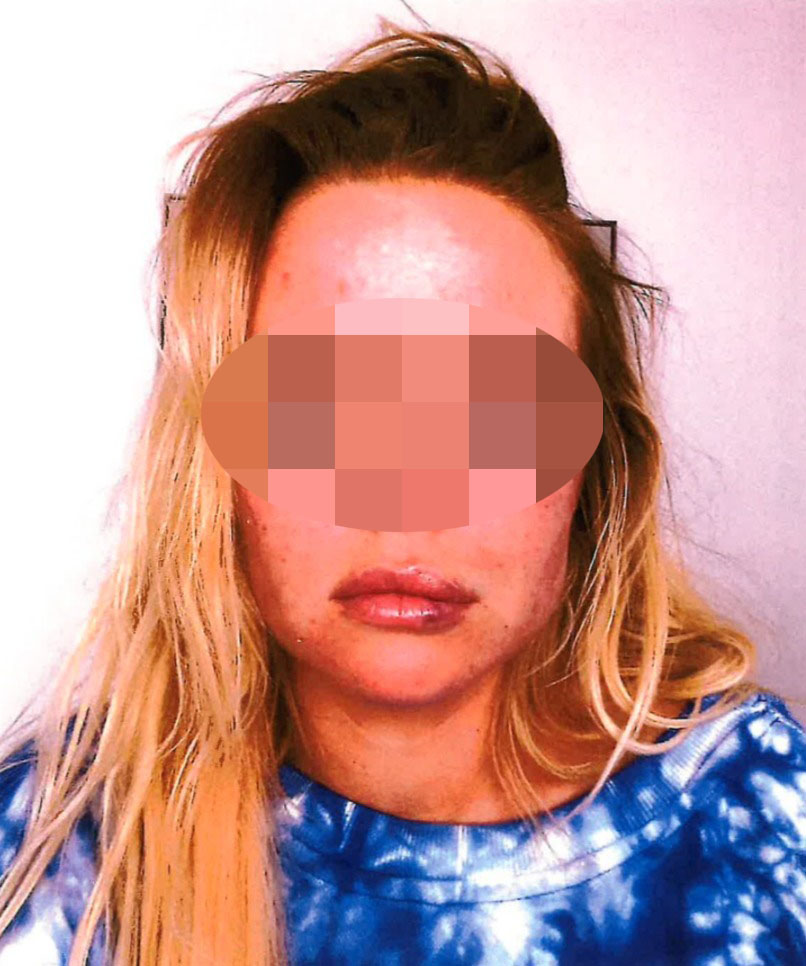 The report, filed in Los Angeles Superior Court, includes private messages she and Bauer exchanged on Instagram that later evolved into two sexual encounters at the pitcher's home in April and May.

“I agreed to have consensual sex; however, I did not agree or consent to what he did next,” the woman reportedly explained in a sworn declaration. “I did not agree to be sexually assaulted.”

Court records obtained by The Sun detail how Hill, 27, alleged that Bauer hit her on the face, vagina, and buttocks. Hill also alleged he strangled her with her hair.

Hill said she lost consciousness during both encounters. She was hit in the face during the second.

Text messages appeared to show that Bauer messaged Hill to ask her how she was in the aftermath of the alleged attack.

Bauer reportedly said: “I feel so bad that this happened. Wish I could be there with you through it.”

A second message read: “I do. I absolutely do. Never want to see you hurting.” 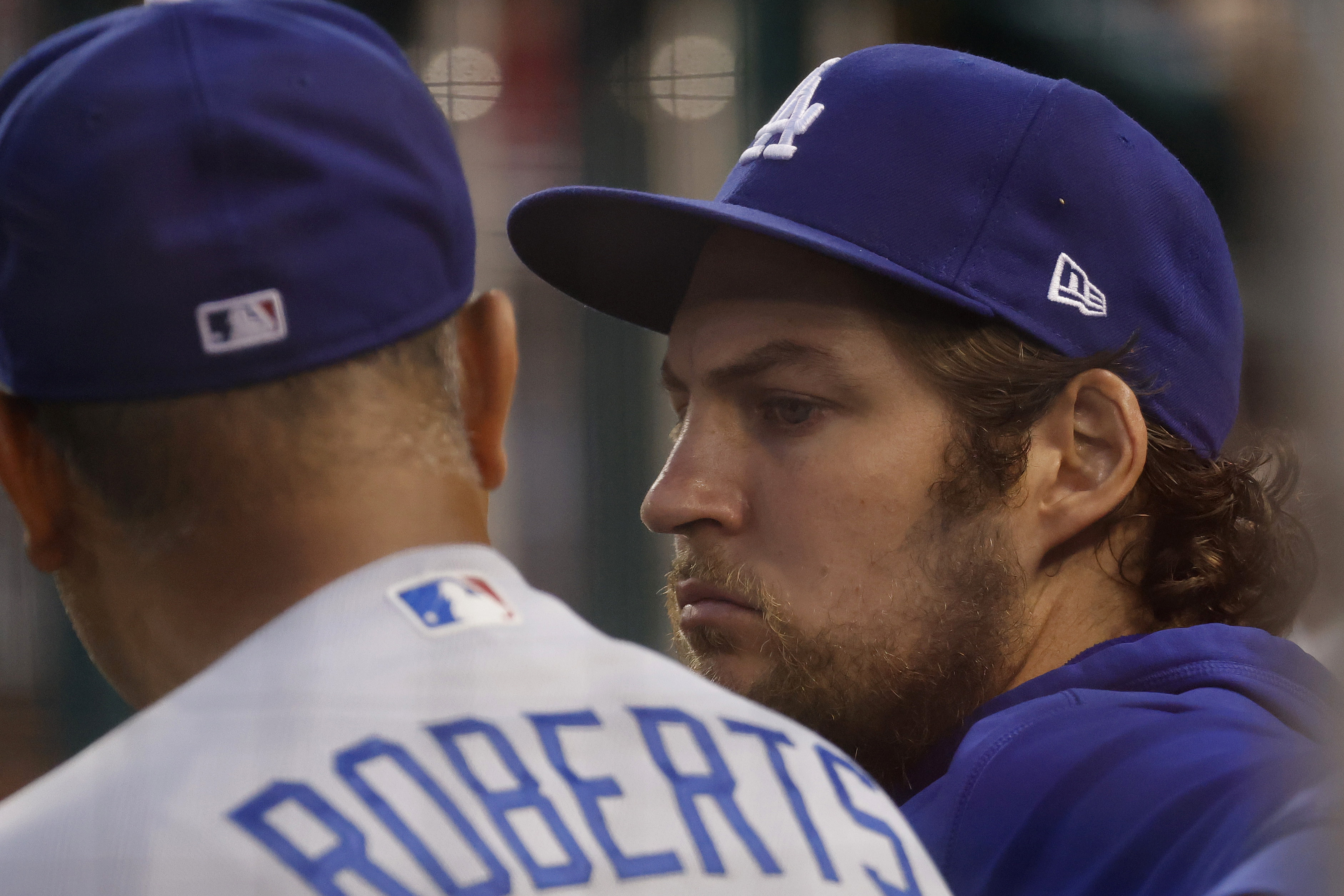 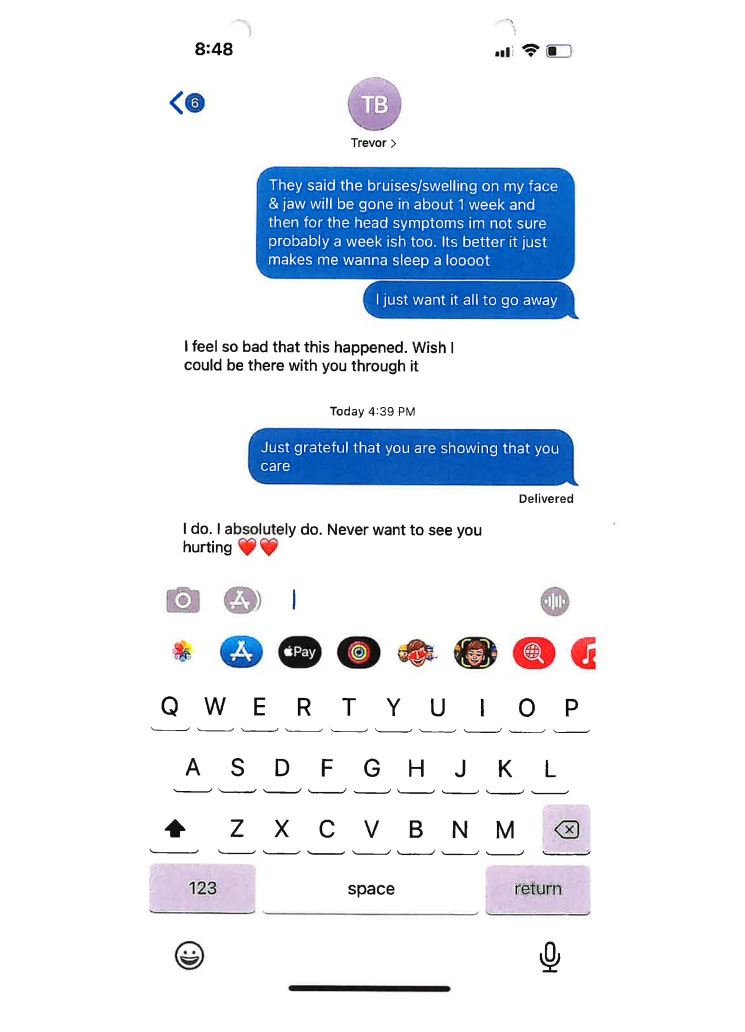 In disturbing images included as part of the report, Hill can be seen with two black eyes and scratch marks across her face.

Medical records appear to show she was hospitalized for injuries which included a head injury.

Hill claims she first began talking with Bauer over Instagram before the pair decided to meet in person at his home in April.

In the first encounter, the woman reportedly drove from San Diego to Los Angeles to meet Bauer.

Once they became intimate, the woman claims Bauer used her hair to choke her until she blacked out, court documents show.

It was then that the woman claims Bauer “sexually assaulted” her by sodomizing her, leaving her bleeding and struggling to walk. 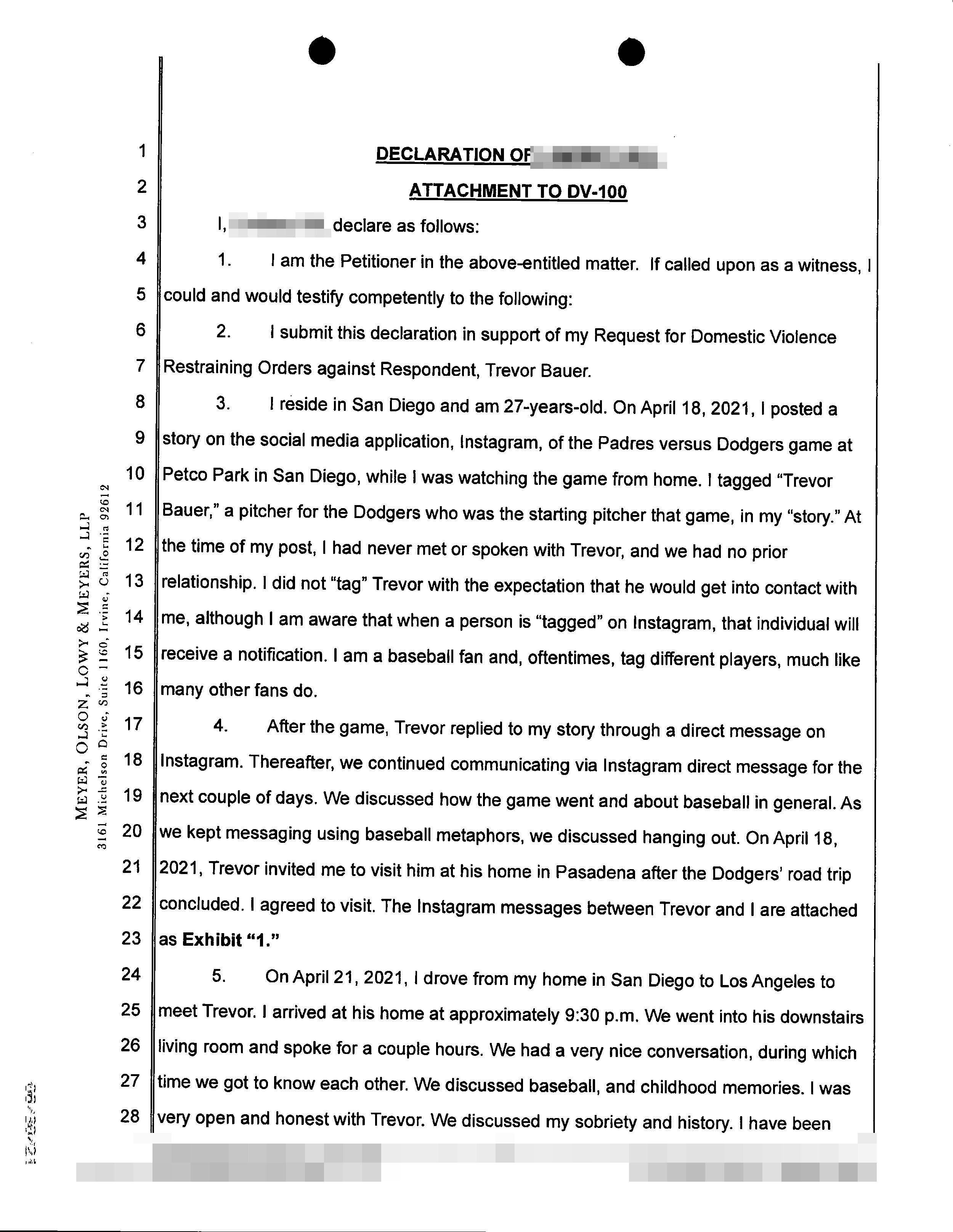 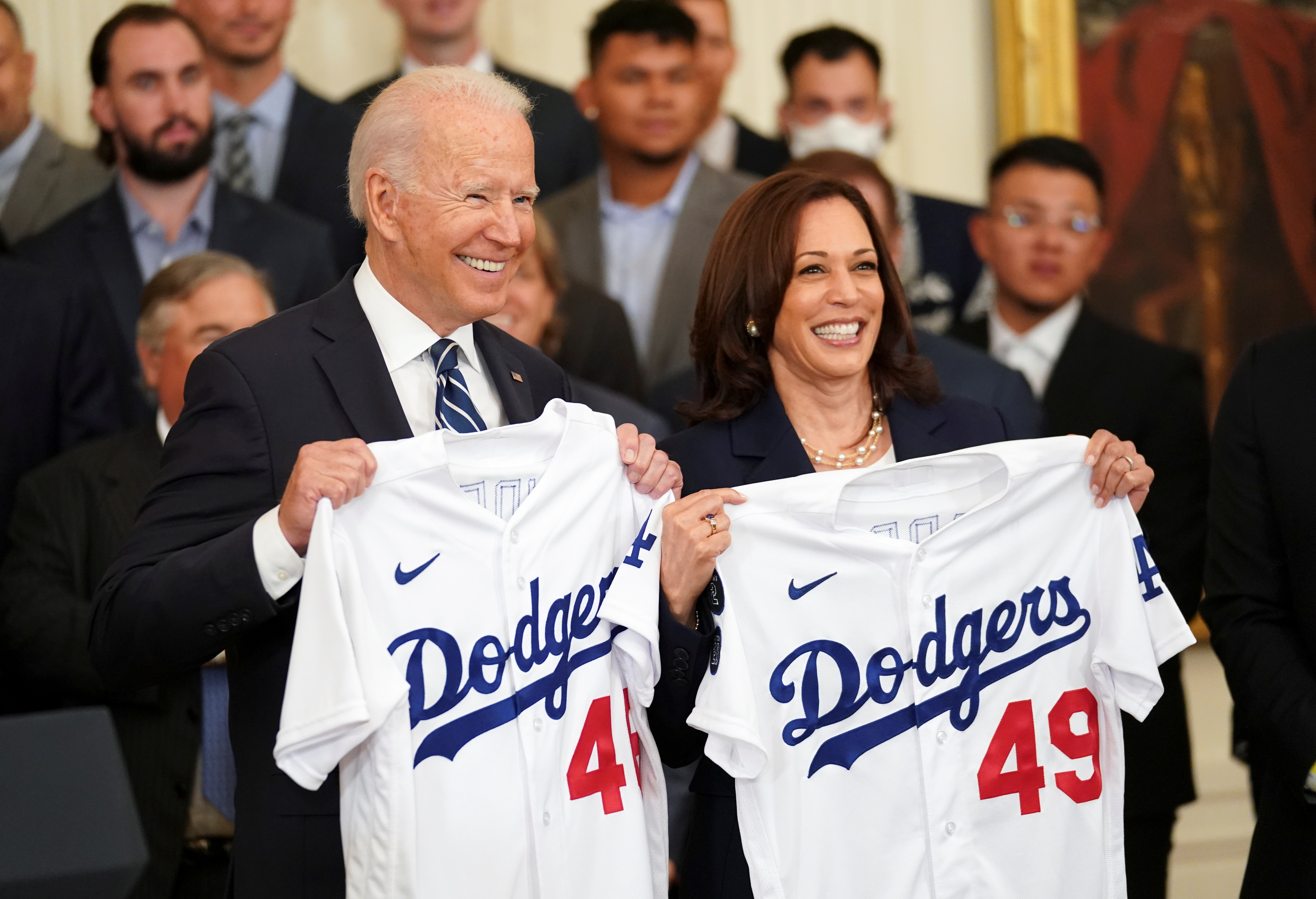 The pair communicated the next morning with Bauer allegedly teasing her about being sore and her informing him that she did not enjoy the time together, according to the report.

During this second time together the woman accused the pitcher of punching her several times in the head and vagina.

“After punching me several times, he then flipped me back onto my stomach and began choking me with hair,” she said.

She said: "This was the first punch I felt but it is very possible that Trevor had already been punching and scratching the right side of my face while I was unconscious.

"I was absolutely frozen and terrified. I could not speak or move. After punching me several times, he then flipped me back onto my stomach and began choking me with hair. I lost consciousness again.

"He opened my legs to expose my vagina and began punching me repeatedly in the vagina." 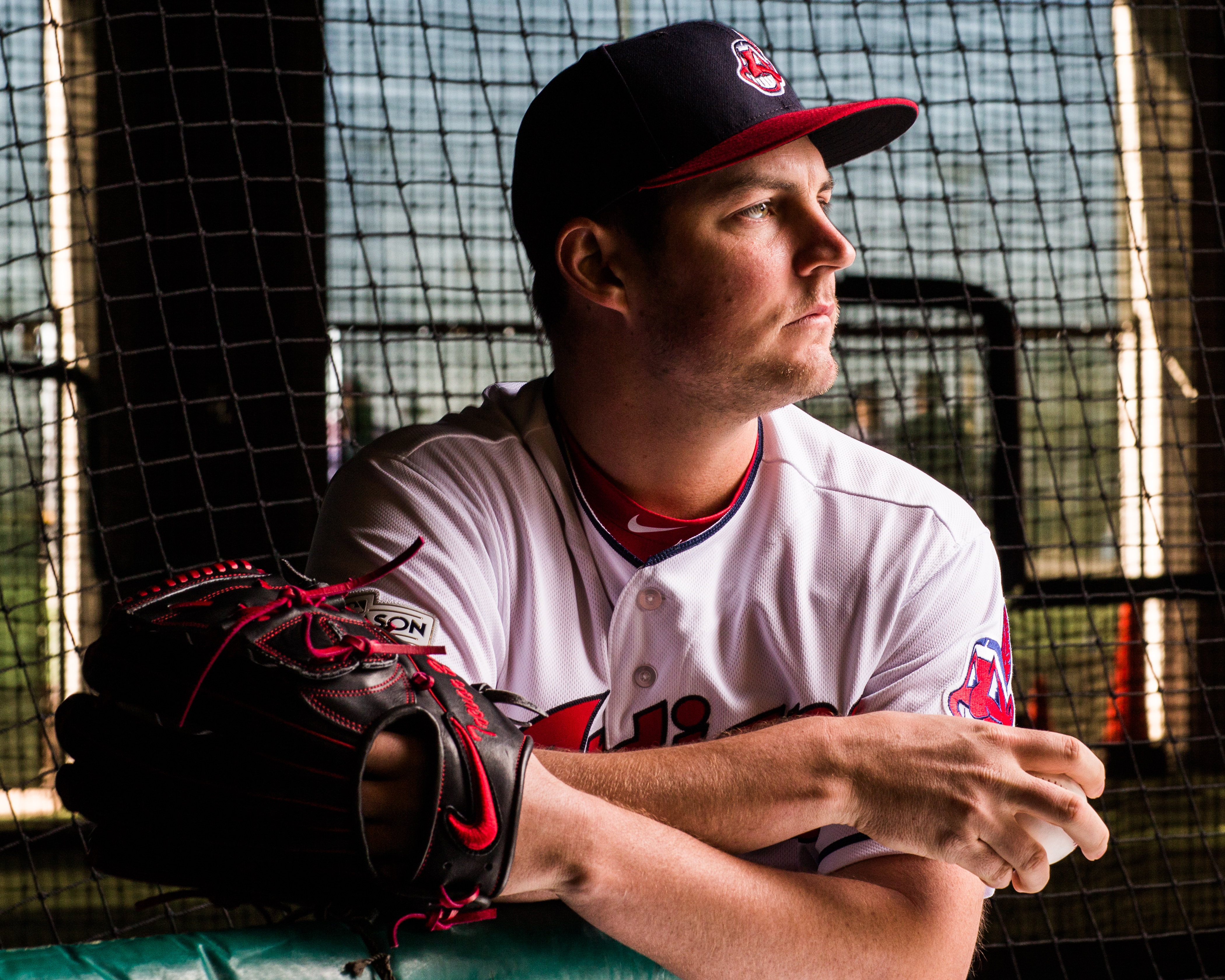 The experience, she says, left her in a state of shaking and sobbing – with Bauer allegedly trying to inform her she was safe.

The declaration goes on to add that it was during their second and final time together that the woman visited an emergency room and claims to have been diagnosed with a head injury and assault by manual strangulation.

The woman reportedly quizzed Bauer about his actions while she became unconscious and the Dodger hurler said he punched her buttocks and she let him know that she didn’t consent to that.

Bauer then switched topics, the accuser reportedly wrote in her declaration.

"We have messages that show [the accuser] repeatedly asking for 'rough' sexual encounters involving requests to be 'choked out' and slapped in the face."

The woman's attorney, Marc Garelick, said: "Our goal is to keep Mr. Bauer from contacting our client in any way possible.

"[We] sought and obtained an order for Protection from the Court against Mr Trevor Bauer, under the Domestic Violence Prevention Act."

Garelick added: "The order is a result of a recent assault that took place at the hands of Mr. Bauer where Ms. Hill suffered severe physical and emotional pain.

"We anticipate there will be criminal action against Mr Bauer, and it is our hope law enforcement will take our client’s allegations and case seriously."

The Dodgers said in a statement they take “any allegations of this nature seriously.”