Drafted in 2018 with the No. 1 overall pick, Baker Mayfield is nearing the end of his four-year rookie deal with the Cleveland Browns, and now he’s ready to get paid by a franchise cursed with a revolving door of quarterbacks for the past two decades.

A round of contract negotiations are on their way for a number of teams to re-sign the generally strong QB class from 2018 — which includes Mayfield, Josh Allen and 2019 MVP Lamar Jackson. Mayfield’s time to strike a new deal with Cleveland is around the corner, but it seems that he has no plans to give the Browns a hometown discount for his services after three seasons together.

According to ESPN senior NFL reporter Jeremy Fowler, the franchise has remained both cautious and confident about resigning Mayfield. “I’ve talked to execs who think that Baker Mayfield’s deal is the easiest to do because Lamar Jackson, Josh Allen are considered more in that top five-to-seven range of quarterbacks in the league, a little bit of a higher tier, proved a little more,” said Fowler. 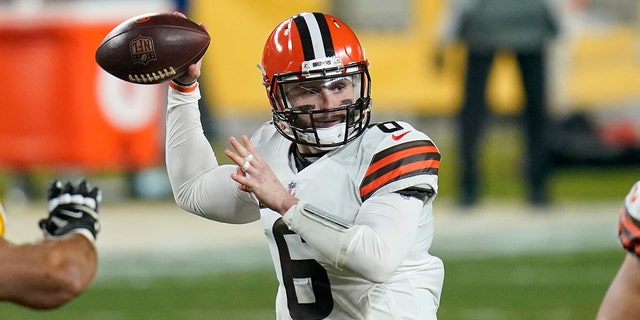 Fowler added, “And then Mayfield’s money might be a little more manageable as a result, if the Browns can get it to the finish line. But Mayfield is hardly going to take a discount here. I know the Browns are going to look very hard at this.”

Mayfield did lead the franchise to their first playoff appearance since 2002, so his cache with them is sizable. However, they also have some room to continue evaluating the QB under reigning Coach of the Year Kevin Stefanski, who’s got more long-term credit, as of now, than Mayfield.

For now, the Oklahoma legend could be the player who breaks the Cleveland QB curse, which would keep the fanbase happy. His star power may also be too great for the Browns to try to squeeze a deal out him.