Dramatic footage has emerged showing the moment unconscious US synchronised swimmer Anita Alvarez was dragged out of a pool in Budapest after fainting in the water as she finished her routine at the World Championship yesterday.

Coach Andrea Fuentes had to plunge into the water to rescue 25-year-old Alvarez after lifeguards failed to react as she sunk in the pool.

Amazingly, it is the second time Fuentes has saved the swimmer after she was filmed diving in and pulling her to safety when she fainted in the pool during an Olympics qualifying event in Barcelona last year.

Alvarez regained consciousness soon after being rescued from the Budapest pool, received immediate first aid and is reportedly recovering well. Footage of yesterday’s event shows the US swim team celebrating as Alvarez finishes her solo routine before realising something is wrong and moments later, the 25-year-old is seen being dragged from the pool by Fuentes and a male lifeguard.

Fuentes later revealed Alvarez stopped breathing for ‘at least two minutes’ during the ordeal following her performance in the women’s solo free event.

‘I tried to wake her up. Well, I slapped her and opened her jaw. But the truth is that until after we got to the emergency room, she did not breathe for at least two minutes,’ Fuentes said during a Spanish-language interview last night.

The US coach, who was critical of lifeguards after the near-tragedy, had said last night a decision on whether Alvarez would swim in the free team finals tomorrow would be taken on medical advice. But today the 39-year-old mum-of-one said Alvarez was determined not to abandon the World Championships.

She told Spanish daily El Mundo: ‘She doesn’t want to leave here with the photo of her unconscious at the bottom of the pool. In any case in the team events Anita does a lot of pirouettes and very few apneas so she will almost certainly compete.’ 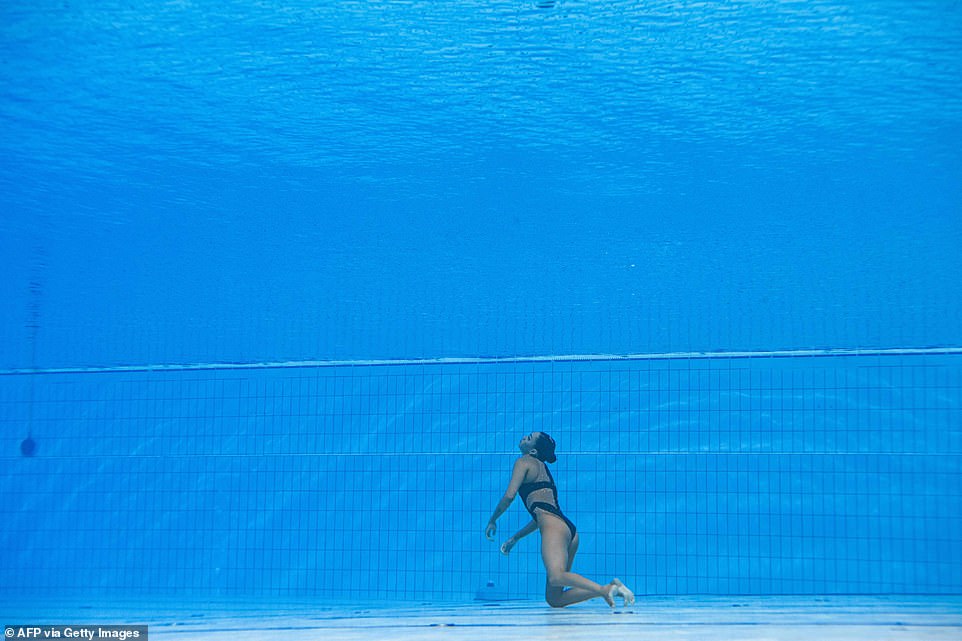 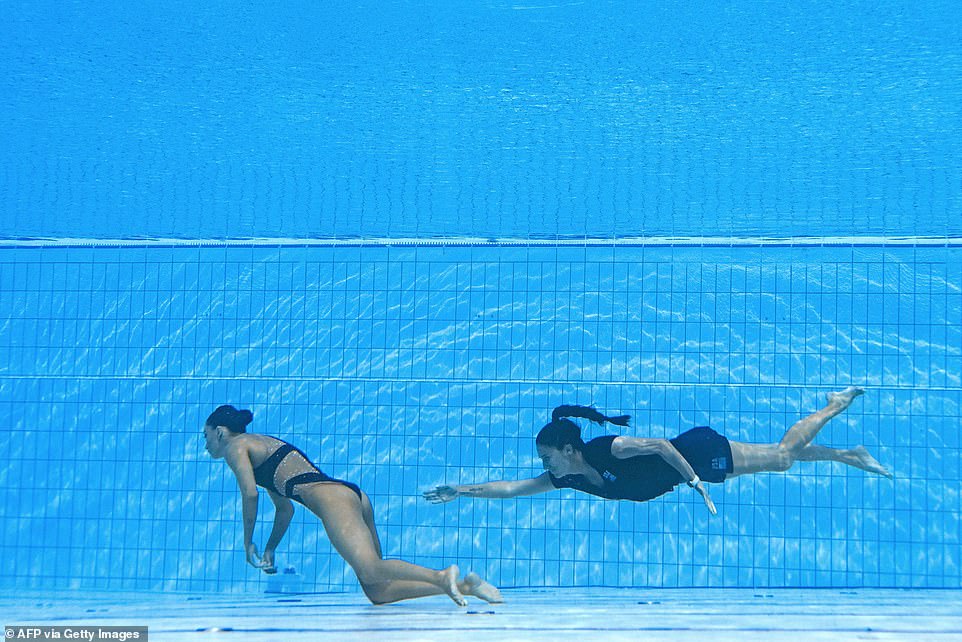 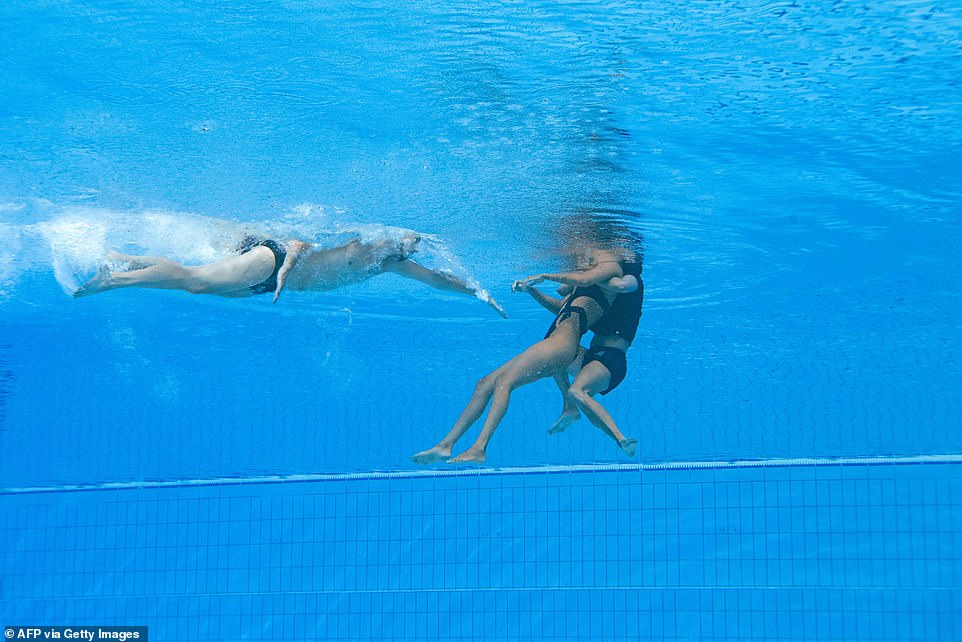 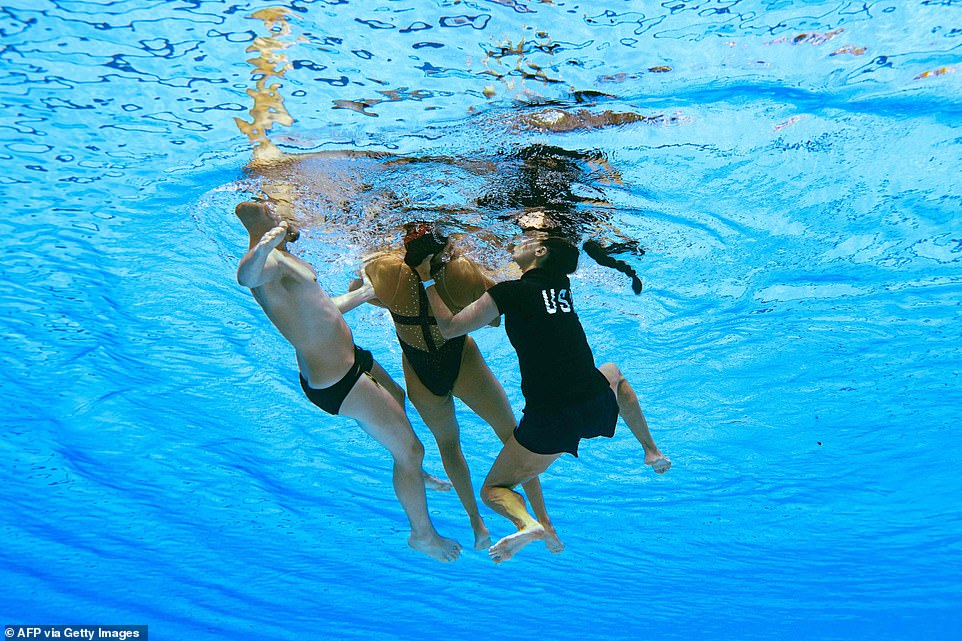 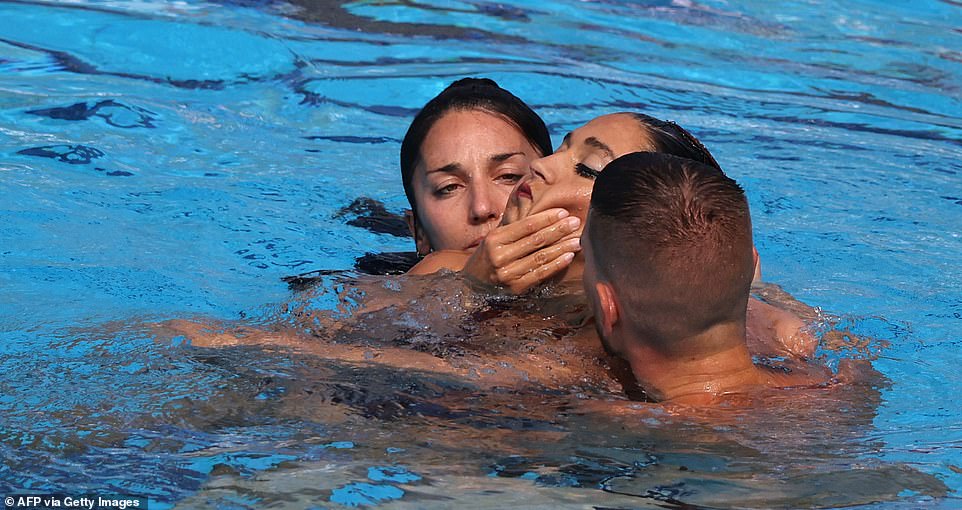 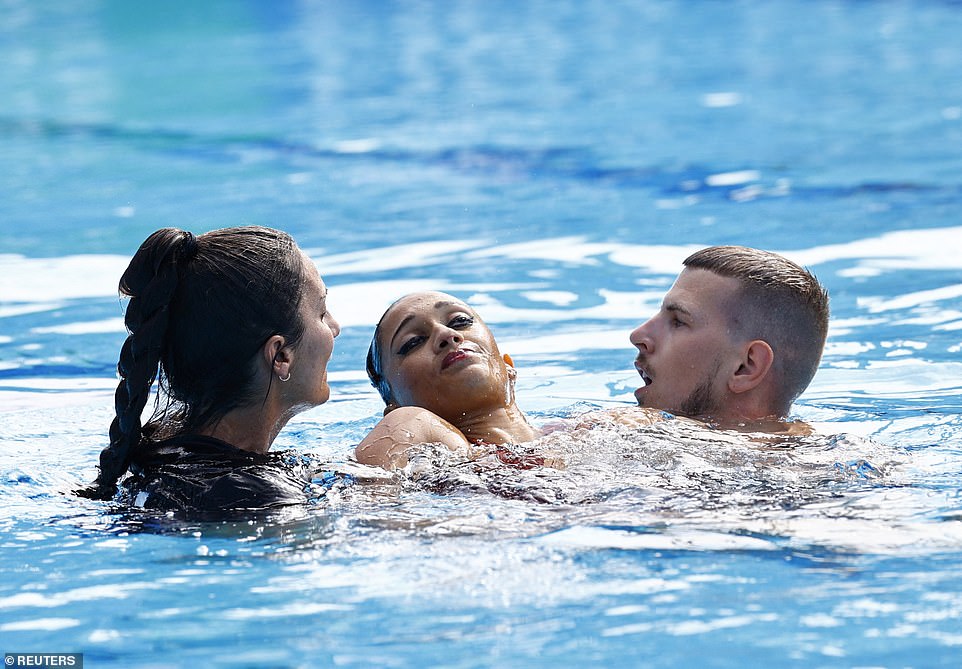 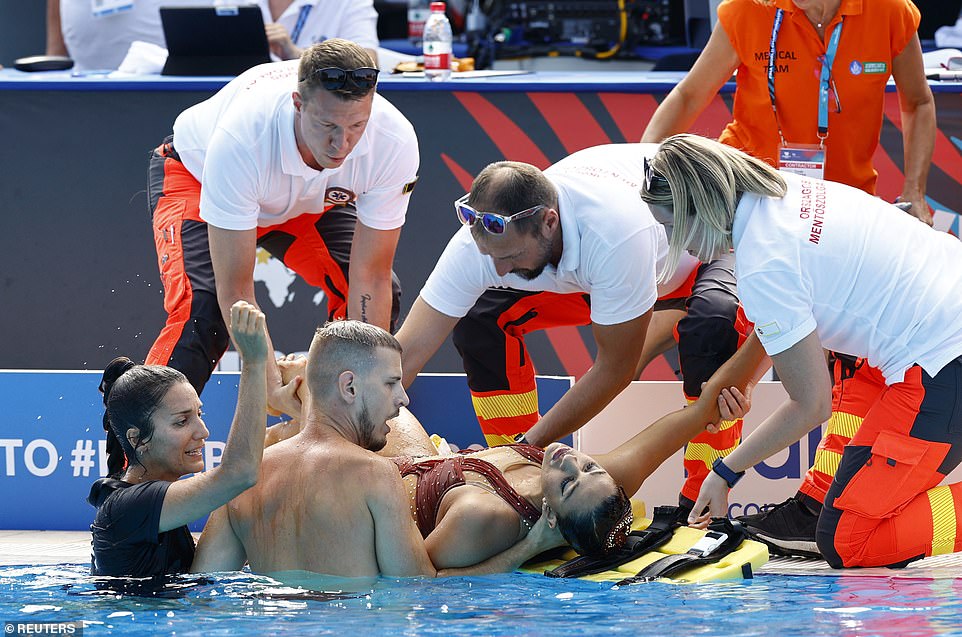 It’s not the first time the swimmer has fainted in the pool – she did so in Barcelona last year, and Fuentes also saved her on that occasion 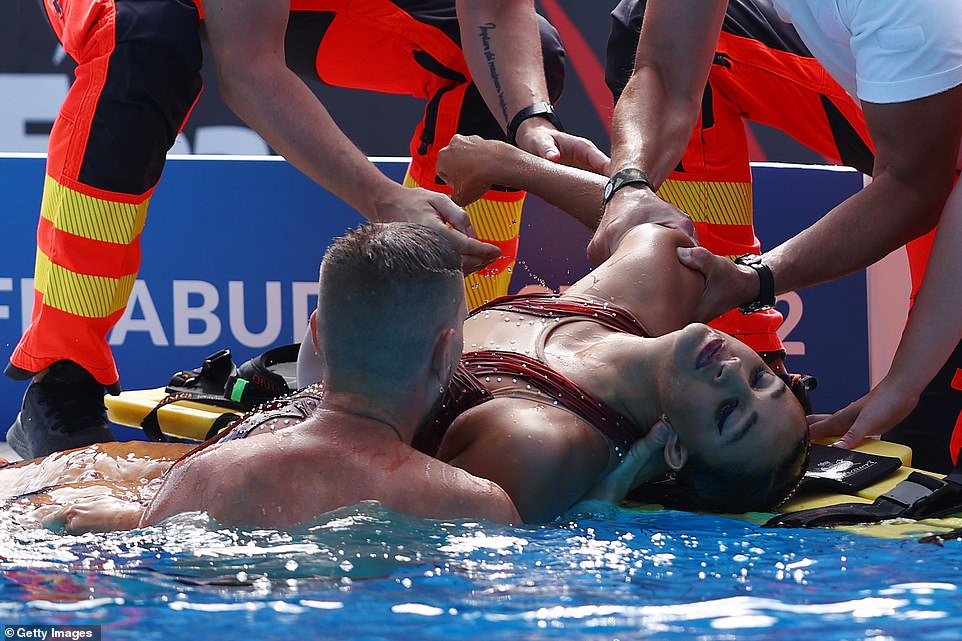 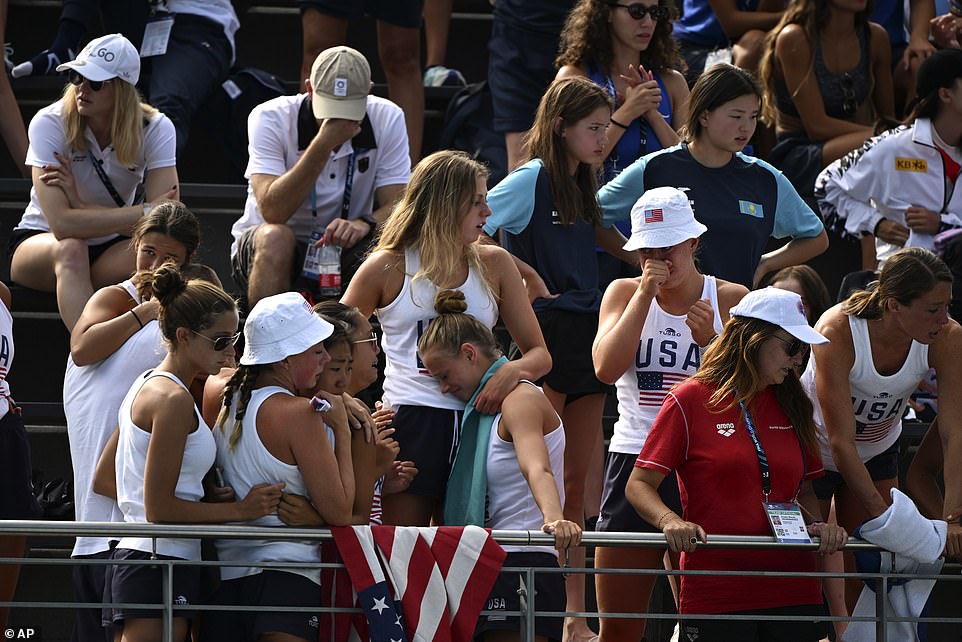 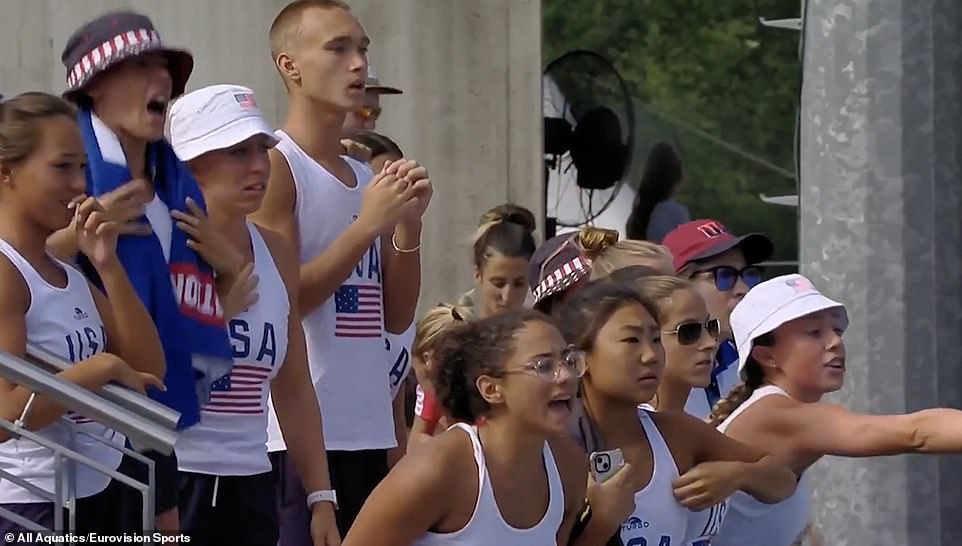 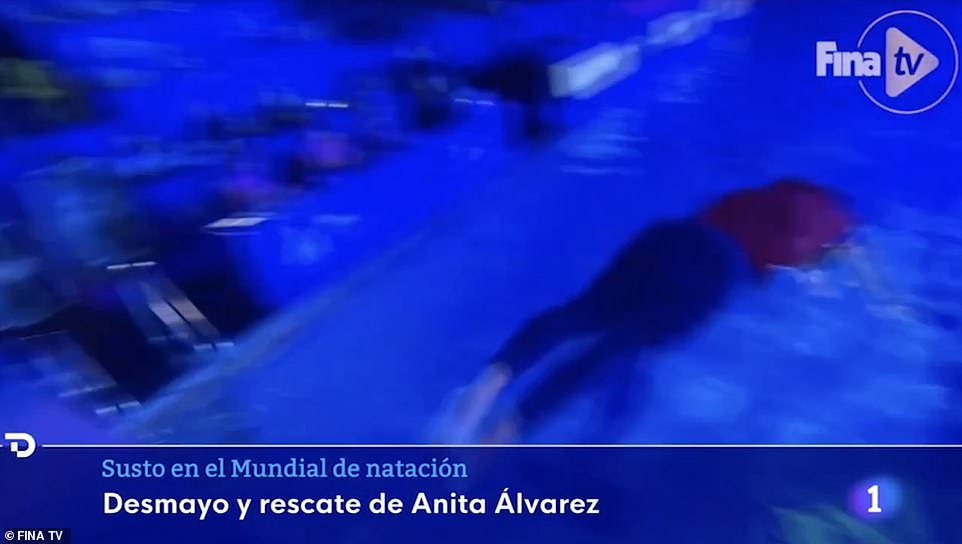 This is the second time Alvarez has fainted in a pool during a competition, with Fuentes again coming to her aid during the Olympics qualifying event in Barcelona (pictured) 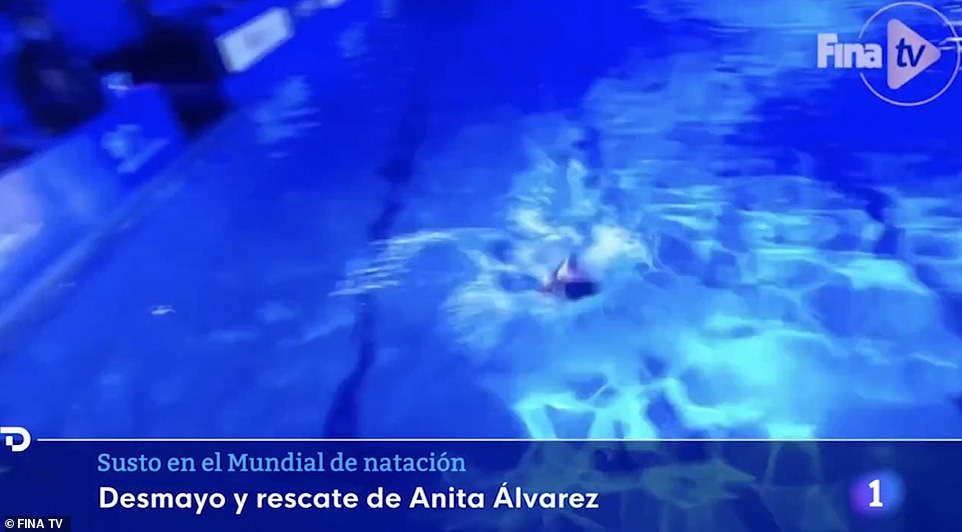 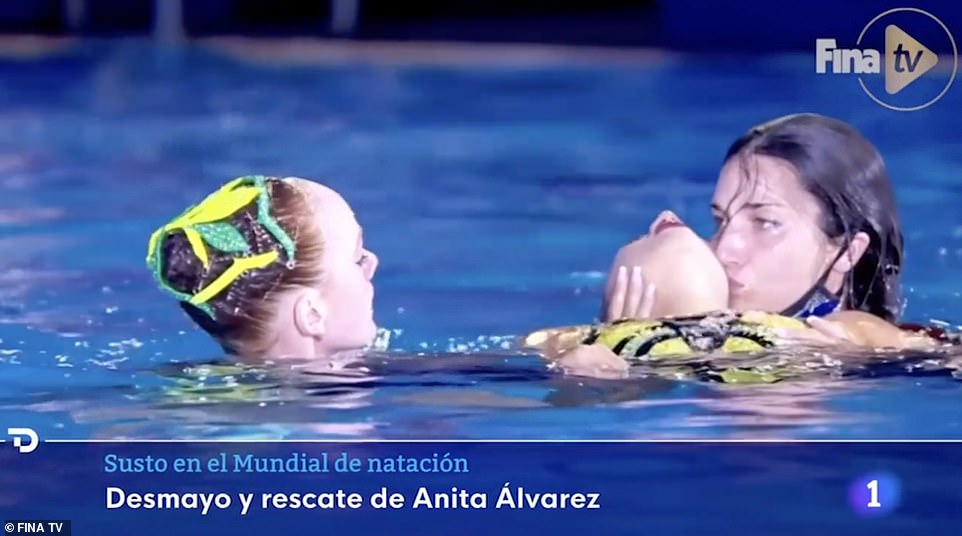 Who is hero coach Andrea Fuentes?

Coach Andrea Fuentes is one of Spain’s most decorated Olympian with four medals in synchronised swimming.

Andrea, 39, also has an astonishing 16 World and European Championship medals.

Her Olympic haul includes two silvers at the Beijing 2008 games in women’s duet and the team competition and she also won bronze in the same events four years later at London 2012.

Andrea’s only gold medal was in the 2009 World Championships in Rome in the Free Routine Combination and her amazing five golds at the European Championships were in the 2008 and 2012 finals held in Eindhoven in the duet, team and combination events.

She retired from elite competition in 2013 and became a coach the same year after a fall out between the national trainer Ana Tarres and the Royal Spanish Swimming Federation.

Andrea has an eight year old son Killian, through her relationship with Spanish gymnast Victor Cano, 44.

In 2018, her sister Tina, also a synchronised swimmer, died at 34 from cancer.

Speaking on Spanish radio about her heroics, Andrea said: ’She only had water in her lungs, once she started breathing again everything was ok. She’s said she wants to swim in the final.

‘It felt like a whole hour. I said things weren’t right, I was shouting at the life guards to get into the water, but they didn’t catch what I said or they didn’t understand.

‘It was a big scare. I had to jump in because the lifeguards weren’t doing it,’ Fuentes said afterwards. ‘I was scared because I saw she wasn’t breathing, but now she is doing very well. Anita is doing much better.’

The American swim team was visibly distressed by the horrific incident and were seen consoling each other by the pool afterwards.

Fuentes said she realised something was wrong when Alvarez ‘went down and didn’t react’ rather than coming up after her routine. ‘When a swimmer finishes, the first thing they want to do is breathe,’ she said.

The coach said she motioned to lifeguards for help but they did not see her, ‘so I jumped in myself. I went there as fast as I could. I went in even faster than when I was going for Olympic medals.’

Fuentes said Alvarez ‘was not breathing’ when she reached her but was revived and checked for signs of damage after the terrifying incident.

‘Oxygen, glucose, heart, blood pressure, everything’s fine,’ she said, adding that Alvarez will rest today before returning to the pool because ‘she has to swim the final’.

Speaking in an interview on radio in Spanish, the coach said: ‘We have looked at many things and the pressure is good. We’ve done a CT scan on his brain, she’s fine.’

‘It has been, as you know, sometimes we see it happing in sport, cyclists, marathons in athletics vomit many times. She told me why?

‘I said, as athletes, we dedicate ourselves to discovering where the limit is and sometimes we find it, and today you have found it, you have gone so far that your body said, girl, don’t ask me anything else.’

She added: ‘In our sport it happens sometimes, when we go without breathing for a long time, with very high pulses and sometimes the oxygen not getting where it has to get, we faint.

‘But it is that we spend many hours in sync. What happens is, we do exercises to endure as much as possible for the competition, and today it happened during the competition.’

‘She gave an exceptional solo performance and competed brilliantly in four preliminary and three final competitions across six days.

‘Anita has been evaluated by medical staff and will continue to be monitored. She is feeling much better and using today to rest.

‘Whether or not she will swim in the free team final on Friday, June 24th will be determined by Anita and expert medical staff.’

There can be many different reasons why someone might faint and briefly lose consciousness.

Common causes include standing up too quickly, which could be a sign of low blood pressure, not eating or drinking enough, being too hot, being in severe pain, a sudden fear or drugs and alcohol.

It is caused by a lack of blood to the brain because of a drop in pressure.

Most episodes only last a few seconds or minutes and are not typically a cause for concern.

But regular fainting can be a sign of a heart problem or a neurological condition, which should be checked by a doctor.

Fuentes summed up the situation by posting a statement on Instagram.

‘Anita is okay – the doctors checked all vitals and everything is normal: heart rate, oxygen, sugar levels, blood pressure, etc… all is okay,’ she wrote.

‘We sometimes forget that this happens in other high-endurance sports. Marathon, cycling, cross country… we have all seen images where some athletes don’t make it to the finish line and others help them to get there.

‘Our sport is no different to others, just in a pool, we push through limits and sometimes we find them.

‘Anita feels good now and the doctors also say she is okay. Tomorrow she will rest all day and decide with the doctor if she can swim free team finals or not.’

It’s not the first time Alvarez has passed out in the pool.

Last year the 25-year-old fainted during an Olympics qualifying event in Barcelona, where she was also rescued by Fuentes.

‘Unfortunately I’ve seen it happen to her before – never in competition, though,’ Alvarez’s mother Karen said at the time.

‘I knew right away. On their last element, I could tell something was up. It was hard to watch, definitely.’

Alvarez finished seventh in the event, which was won by Japan’s Yukiko Inui.

Most synchronised swimming routines require athletes to hold their breath for no more than one minute at a time.

In 2010, Olympic medal winner Fran Crippen died in an open water swimming event in the UAE.

The long distance champion was aged 26 when he competed in the 10,000m event. 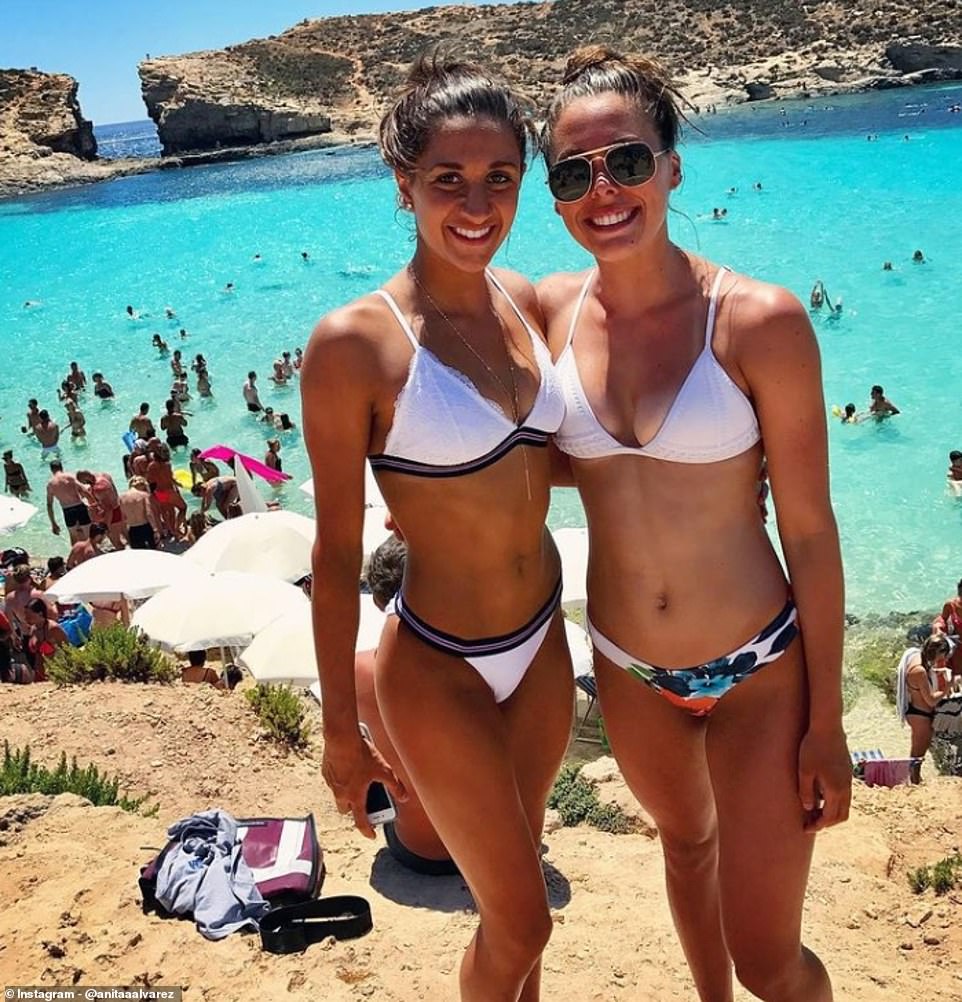 It is the second time Anita Alvarez (left) has fainted in a pool during a competition, with Fuentes again coming to her aid during the Olympics qualifying event in Barcelona 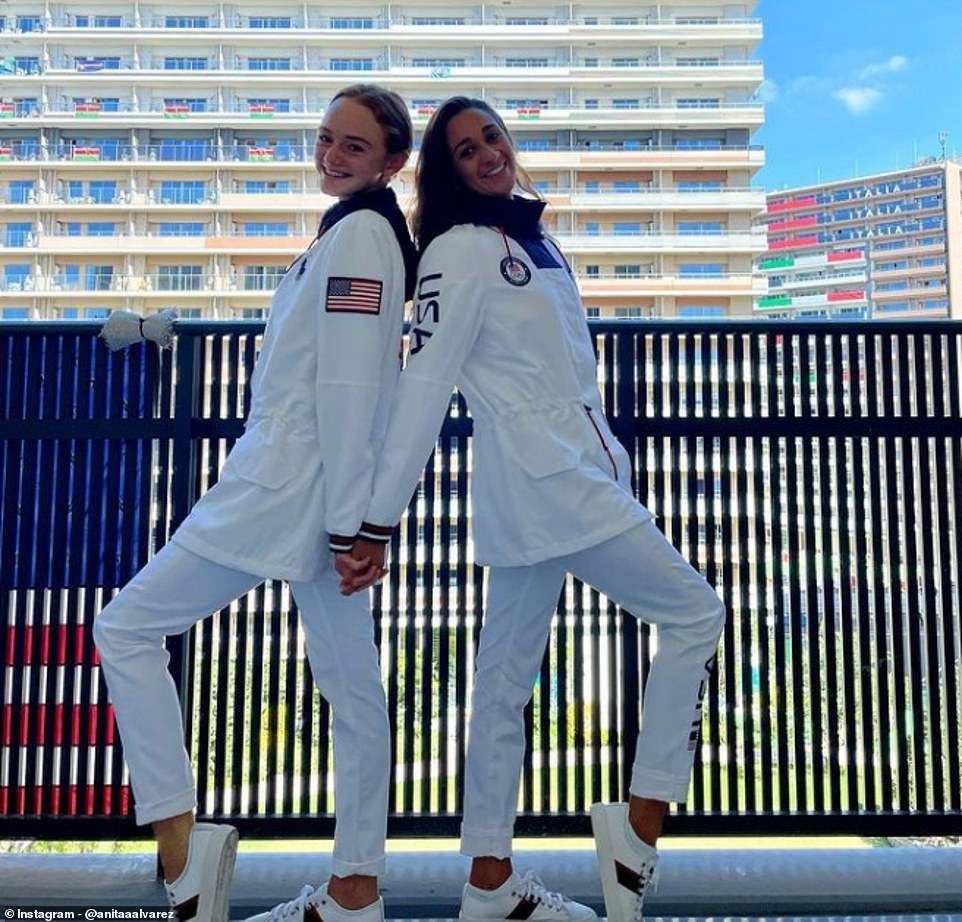 Last year 25-year-old Alvarez (right, in USA team kit) fainted during an Olympics qualifying event in Barcelona, where she was also rescued by Fuentes 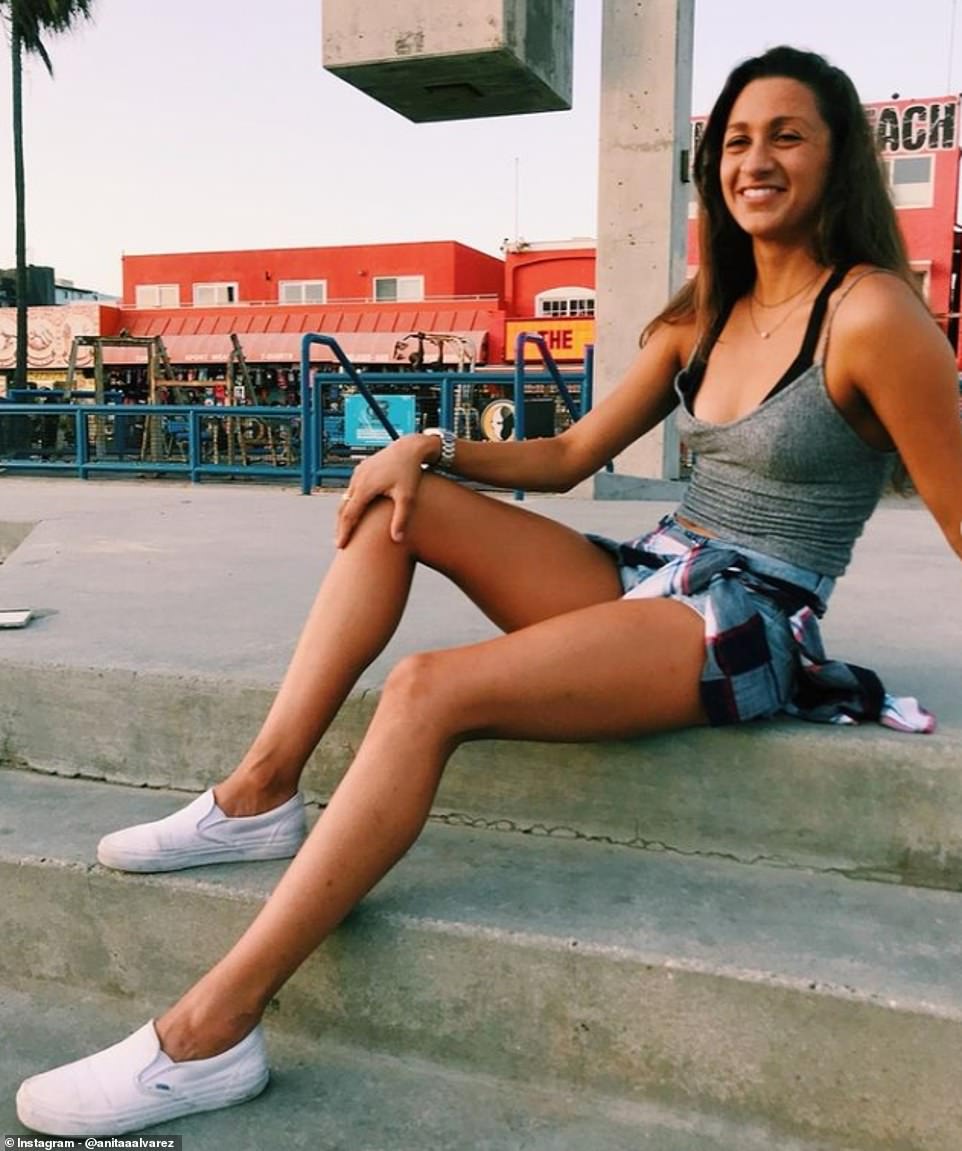 Alvarez (pictured) regained consciousness soon after being rescued from the pool, received immediate first aid and is reportedly recovering well 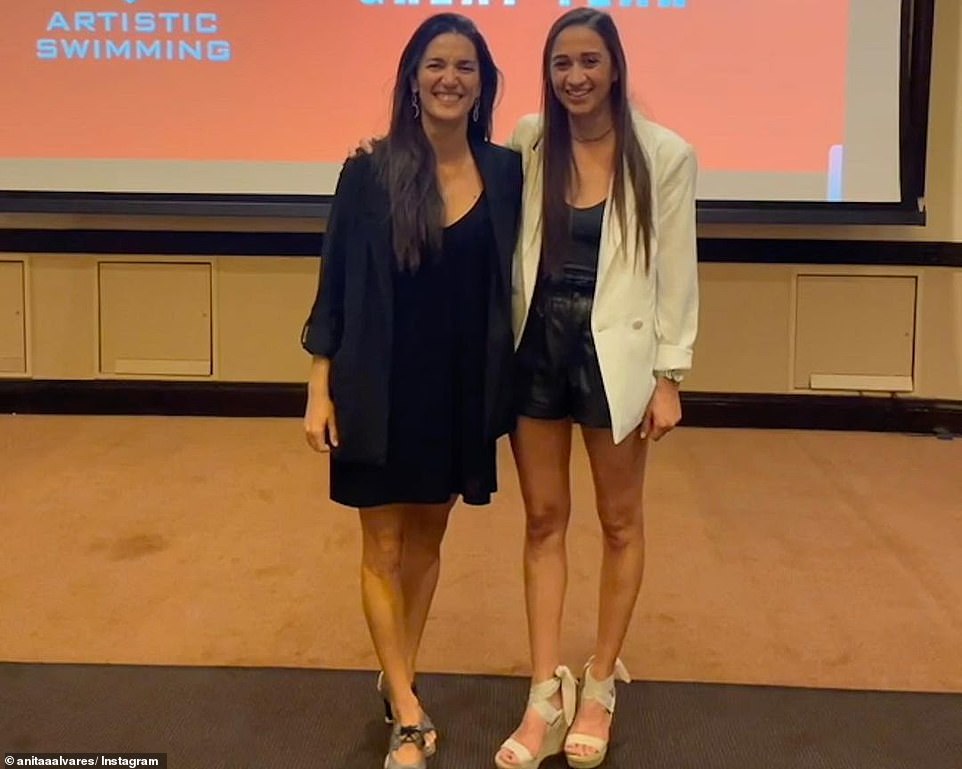 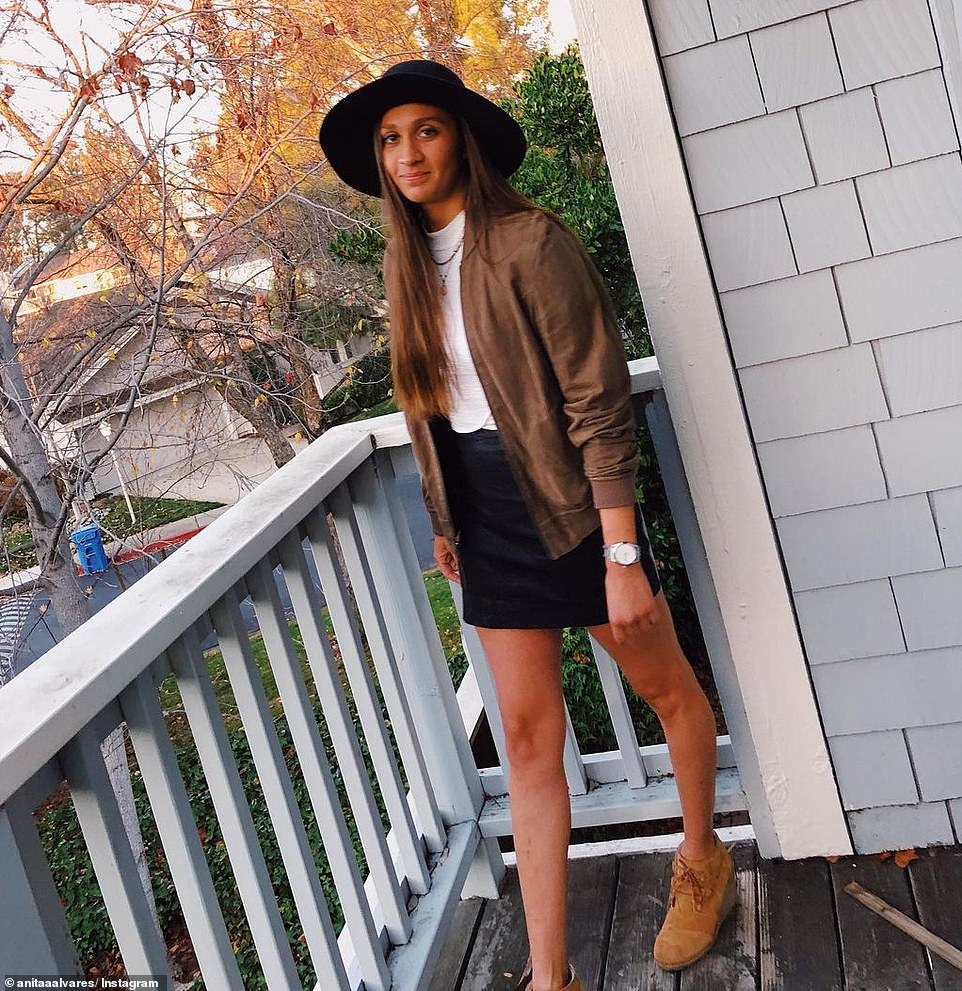 Last year the 25-year-old fainted during an Olympics qualifying event in Barcelona, where she was also rescued by Fuentes 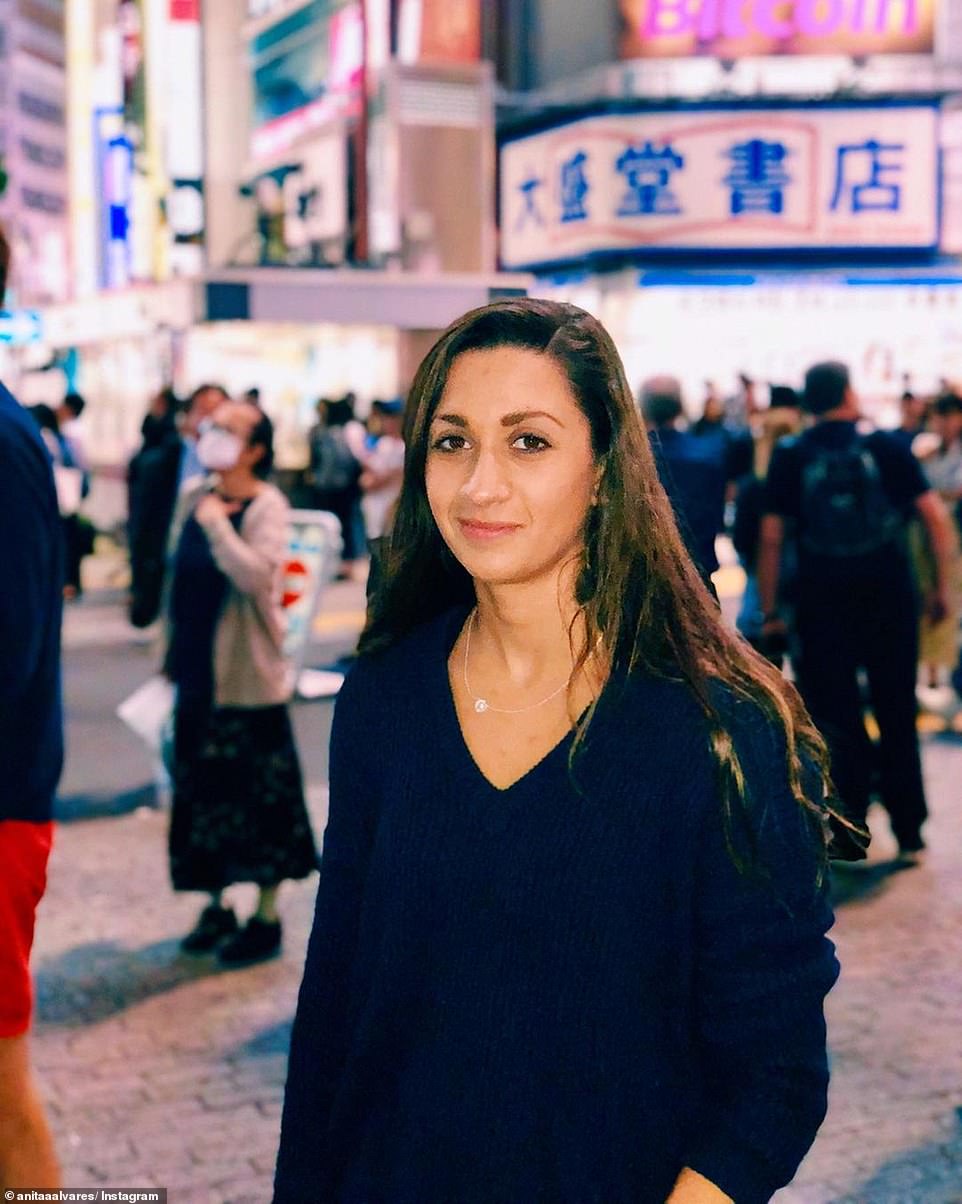 Fellow swimmers only noticed he was missing when they reached the finish line, sparking a desperate search to find him.

His body was found two hours after the end of the race by deep sea divers 500 yards from the shore.

Other swimmers at the time said heat may have been a factor, with water temperature at 30C and competitors reporting heat-related symptoms after completing the race.

A report found Crippen died of a ‘cardiac abnormality’.

In 2015, a Dartmouth College swimmer died at a YMCA pool after making an attempt to complete four laps underwater without surfacing to breathe.

Tate Ramsden, 21, of Nashville, Tennessee, was pronounced dead at the Sarasota pool in Florida after lifeguards and emergency medical personnel could not revive him, according to the Sarasota County Sheriff’s Office incident report.

Ramsden was at the pool with his sister, uncle and a cousin.

‘Tate had been swimming laps in the pool for some time and I was told he had swam approximately 4,000 yards before practicing his underwater swimming techniques,’ Officer Douglas Stidham wrote in the report. ‘It is believed he was likely attempting to complete a ‘100’ which is four laps across the pool without surfacing for air.’

At some point, Ramsden’s sister and cousin noticed that he was not moving underwater, and they alerted lifeguards who pulled him out of the water, Stidham wrote.

Water and blood came pouring from Ramsden’s nose and mouth throughout the attempts to revive him, according to the report.