FARMINGDALE, N.Y. — For a while on Friday morning, it looked as if Brooks Koepka’s course record at Bethpage Black might last only 24 hours.

Dustin Johnson, the No. 1 player in the world, was going low early in his second round at the PGA Championship. He went 4 under through the first eight holes of Bethpage’s toughest nine, putting Koepka’s 7-under 63 from Thursday in serious danger.

In the end, Johnson couldn’t keep it going because he struggled with the putter. He shot a 3-under 67, playing his final 10 holes in 1-over par. But it was still a good day, as Johnson finds himself in a tie for third place as the second round continues.

“I feel like I'm in a good position,” Johnson said. “I'm happy with where I'm at no matter what the lead is after [Saturday.] I'm going to be somewhere around it or close enough to where with 36 holes left, I'm OK.”

Still, it felt like a bit of an opportunity missed for Johnson. Especially considering what he did on his opening nine holes.

He started with a bogey on the 10th hole, but quickly got the lost shot back with a birdie at No. 11. He got to 1 under for the day with a birdie at the par-5 13th hole. And then he turned on the afterburners on one of the most difficult stretches at Bethpage, birdieing 15, 16 and 17.

“Those … are three really tough holes,” Johnson said. "But this golf course, for me, if I drive it in the fairway, I can attack pretty much every hole. So that was the key there, just hit it in the fairway.” 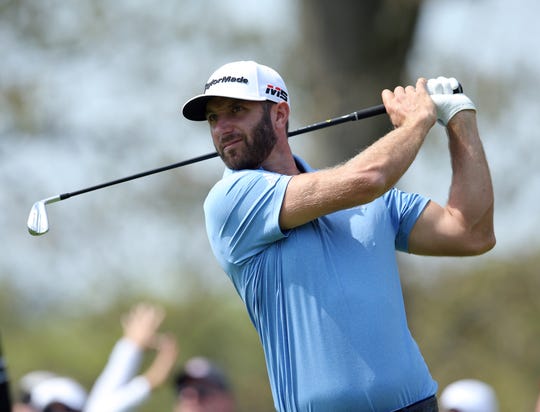 The birdies at 15 and 16 — both par fours that are nearly 500 yards — provided perfect examples of what makes Johnson so good. He crushed both drives more than 315 yards to give him a short iron into each green. And at 17, the tough par three, he poured in a 27-foot putt to put everyone on notice.

Johnson said he never thought of posting a low round, even in the midst of that hot stretch.

“I wasn't thinking anything other than the next shot I had to hit,” Johnson said. “I mean, you can get it going out here. For me, if I can drive it in the fairways, I can get it going. Just need to roll the putter.”

Fittingly, Johnson made his only birdie on the front-nine’s toughest hole, the 524-yard par-4 seventh. And he knew he let an opportunity slip away on the greens.

“I missed quite a few shots out there from 18 to five,” Johnson said. “But if I keep giving myself chances, I feel like I'm rolling the putter well, just a couple misreads. And the greens are tricky. They're hard to read.”

The problem Johnson had Friday was trying to figure out how much break to play. The greens are mostly very flat, and for players who are used to putting on undulating surfaces, it can be difficult to adjust.

“They're very subtle,” Johnson said. “And you're trying to read break, and I missed a lot of putts just playing too much break. But then you do that, and then you go and you play one, you don't play enough breaks. So they're hard to read. And I felt like I'm hitting good putts, so I need to keep doing that.”