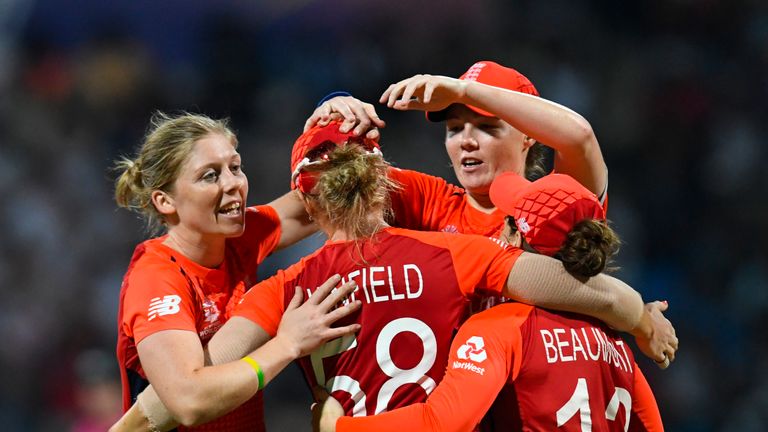 The first woman on the front of the Wisden Cricketers Almanack, a world record WT20I score, an unbeaten summer at home and another World Cup final. Kalika Mehta reflects on a successful year for England Women.

After a triumphant and heady 2017 it was going to take something special for England head coach Mark Robinson and captain Heather Knight to lift their side to another level.

From the beginning of the year thoughts were already on the World T20 in November and Robinson pushed for an unofficial tour to India in March to ensure his players would not go more than seven months without playing competitive cricket. The overseas trip was also a chance for the team to provide opportunities to some of their younger and academy players – with uncapped trio Bryony Smith, Alice Davidson-Richards and Katie George included in the squad that travelled to South Asia.

A T20 Tri-series with Australia and India provided plenty of entertainment, as Danni Wyatt struck her second T20I century as England recorded the highest chase in women’s 20-over cricket, hunting down 199 in just 18.4 overs against India.

However, the Tri-series ended on a slight low note for Knight’s side as they were bowled out for just 107, ending on the losing side in the final against Harmanpreet Kaur’s team.

Although there was further disappointment in the one-day series that followed, as the 50-over World Cup runners-up claimed an ounce of revenge as they clinched the three-match series 2-1, there were plenty of positives for Robinson to glean from the series. 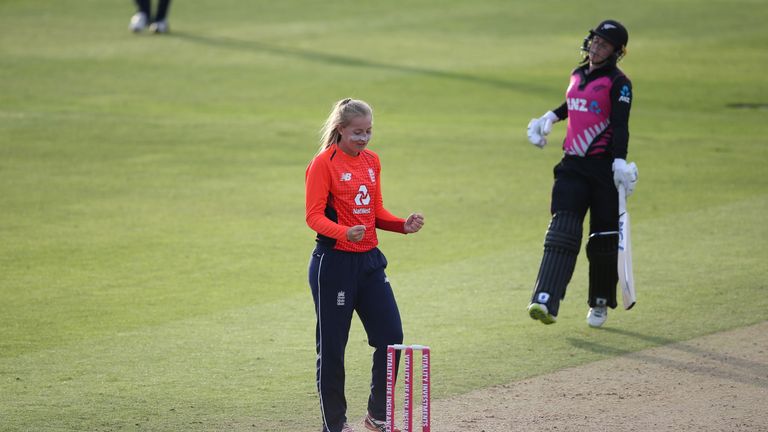 In particular, Amy Jones was given a chance to showcase her talents behind the stumps and with the bat – as Sarah Taylor has been rested for the trip.

Having fallen for consecutive ducks in the first two one-day internationals against India, Jones showed great flair and nerve in third and final ODI – striking 94 off 119 balls and was ultimately unlucky to be run out six runs short of a maiden century for England.

Teenage spinner Sophie Ecclestone – who showed impressive control and variation during the 2017 winter Ashes – continued to grow too, finishing as England’s leading wicket-taker in the ODIs with eight scalps and outshining World Cup winner Alex Hartley, who finished the whole tour with just one wicket.

Returning to England, World Cup heroes Anya Shrubsole, Heather Knight and Natalie Sciver were named among Wisden’s Five Cricketers of the Year for 2017 – announced in April 2018. 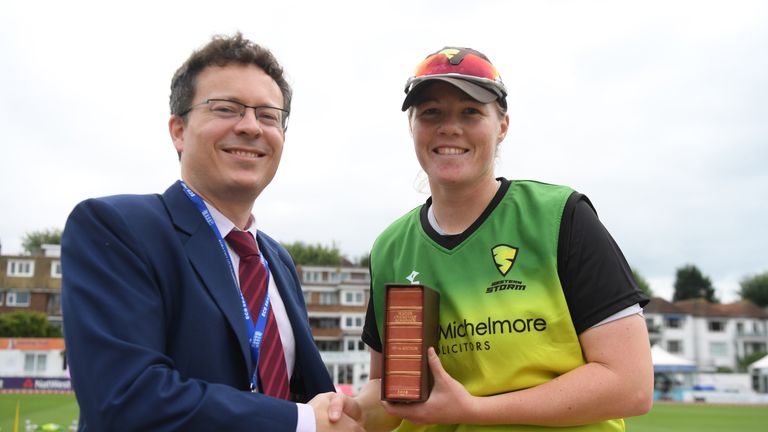 Shrubsole became the first woman to appear on the cover of the Wisden Cricketers’ Almanack having brought England back from the brink of defeat against India, taking five wickets in 19 balls to end with match figures of 6-36 as the hosts lifted the trophy in front of a sold-out Lord’s in July 2017.

England captain Knight contributed over 350 runs during the tournament, including a maiden ODI century against Pakistan, while all-rounder Sciver scored two hundreds, a fifty in the final and earned headlines for playing a deliberate shot through her legs, named the ‘Natmeg’.

The accolades for the English trio was further reinforcement of the how much the side had evolved over the past 18 months, especially on the biggest stage.

A tricky summer – with South Africa and New Zealand visiting – awaited England and their first ODI on home soil since lifting the World Cup did not go to plan.

In Worcester, although Taylor returned to the line-up, Jones kept her place in the ODI side – having relinquished the gloves – and was promoted to the top of the order.

However, 12 months on from the hosts beating the Proteas in the 50-over World Cup semi-final, Dane van Niekerk’s side restricted an under-cooked England side to 189-9 and chased down their target as opener Lizelle Lee struck an unbeaten 92.

But, three days later in Hove Taylor and Tammy Beaumont both hit exceptional centuries – the pairs’ first three figure ODI scores since their group win over South Africa in the 2017 World Cup – in a regulation win before England wrapped up the series with a stylish seven-wicket victory in Canterbury.

The team entered the T20 Tri-series, with the White Ferns and the Proteas, full of confidence and there were fireworks aplenty as two WT20I world records were scored in a single day at Taunton on the first day of the competition.

Hours after Suzie Bates’ side had smashed 216-1 in the opening match against South Africa, Beaumont struck her maiden century in the shortest format – making 116 off just 52 balls – as England racked up an astonishing 250-3 against the Proteas, setting a second new record in a matter of hours.

The hosts lost just one of their five 20-over matches during the Tri-series, overcoming New Zealand in the final, to ensure they headed to the Caribbean full of belief.

And, Knight’s side followed up their Tri-series victory by cruising to a 2-1 ODI series win over the White Ferns as they claimed a summer clean sweep – with Jones in particular impressing in the final three 50-over matches, finished as the top run-scorer against New Zealand with 161 runs.

Yet more success at a World Cup

Much of the year had been spent gearing up for the second ICC World tournament in 15 months and Robinson produced a few surprises with his squad announcement for the Women’s World T20, naming three uncapped players.

Indifferent warm-up games and a washed-out first match left Knight’s side itching to get on the field in St Lucia but impressive outings with the ball saw England sweep to resounding wins in their first three completed group matches. Having already qualified for the World T20 semi-finals, England stumbled against hosts the Windies to finish second in Group A and set up a semi-final showdown with India in Antigua.

Half-centuries from wicketkeeper-batter Jones and Sciver saw the side reach their second consecutive final in a World tournament, this time against old enemies Australia.

Although England ultimately fell short against the Southern Stars, the tournament provided more opportunity to see the growth within the team, not least the depth they have begun to be able to call upon as they reap the benefits of a competitive KSL.

Next year will bring the chance to claim back the Women’s Ashes on home soil and with the upward trend the team are on, you would not bet against them to taste yet more success.

Watch England take on Australia in the Women’s Ashes in the summer of 2019 – live on Sky Sports Cricket!