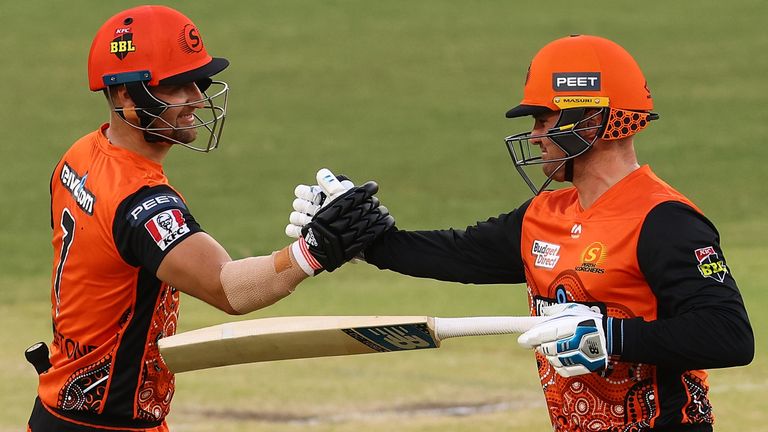 Jason Roy and Liam Livingstone struck their first fifties of the Big Bash League campaign as Perth Scorchers reeled off a fifth straight win with a nine-wicket thrashing of Hobart Hurricanes.

England duo Roy (74no off 52 balls) and Livingstone (54no off 39) shared an opening stand of 123 from 86 deliveries before Scorchers reached their target of 140 with 22 deliveries to spare.

Roy – who struggled for form with England during a disrupted 2020 – hit three sixes and eight fours, impressing against Hurricanes’ spinners during a knock in which he reached fifty from 35 balls.

JRoy was the star of the show in our final #BBL10 match at home! ?? He proved unstoppable with an unbeaten 74 ? #MADETOUGH pic.twitter.com/eRMZNszFwx

Livingstone – who was dropped first ball as D’Arcy Short spilled a chance at backward point – scored a 37-ball half-century and hit four sixes and as many fours.

The Lancashire man was caught by Dawid Malan off the bowling off Scott Boland with 17 runs required but Roy sealed Scorchers’ victory two overs later.

Malan had earlier been dismissed for a six-ball duck for Hurricanes, whose losing streak has now stretched to three games after previously going down to Melbourne Stars and Sydney Thunder.

Hurricanes sit in the fifth and final play-off spot, with Scorchers now up to third after their five consecutive wins, with this success over Hurricanes following victories over Adelaide Strikers, Melbourne Renegades, Sydney Sixers and Thunder.

The one negative for Scorchers was an injury to Mitchell Marsh, who left the field three balls into his spell with a side issue.