FOOTBALL fans have slammed the BBC for not cutting away after Christian Eriksen collapsed during Denmark's Euro 2020 opener with Finland.

The former Spurs midfielder appeared to be receiving CPR as he was surrounded by his worried teammates – and the broadcaster continued filming. 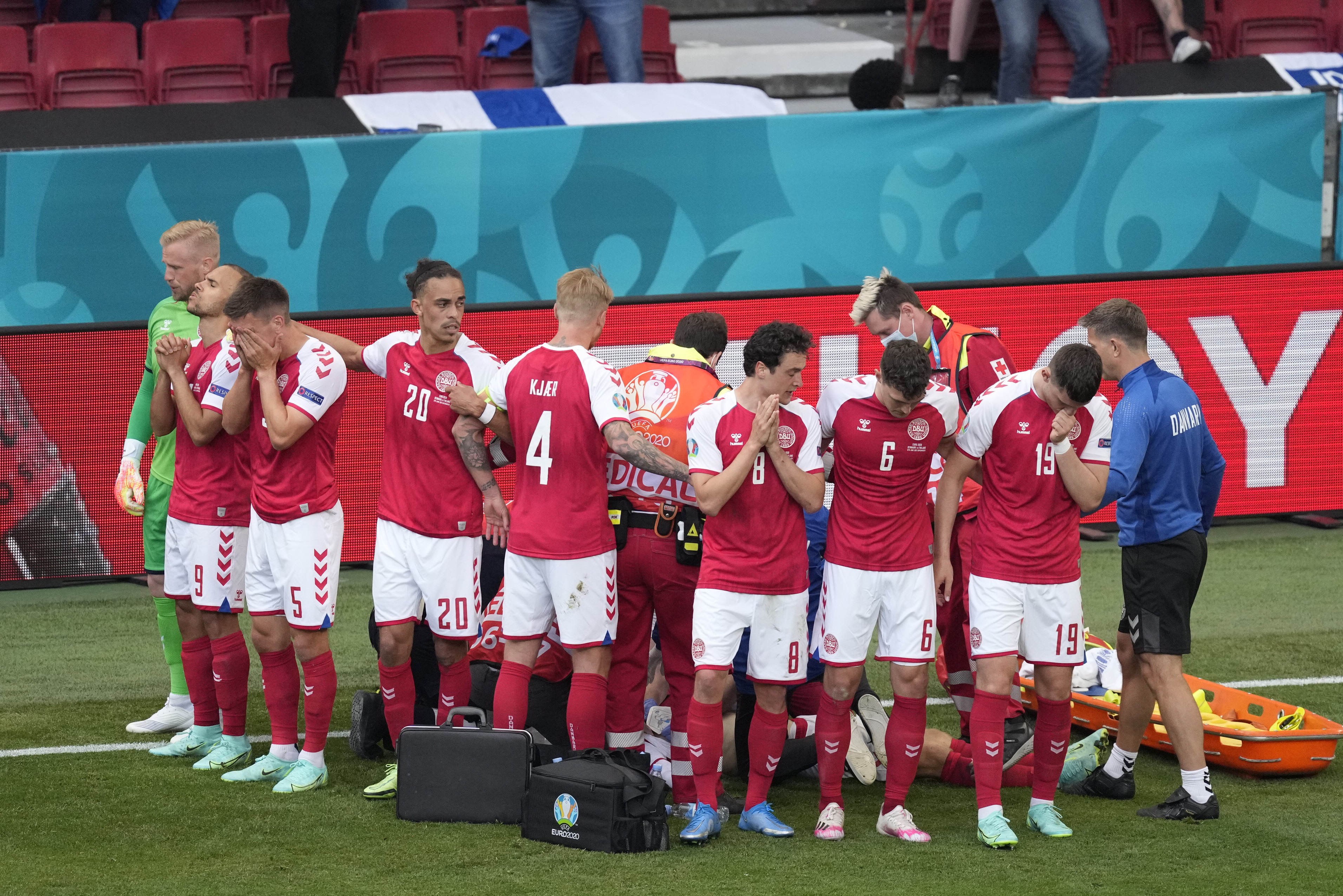 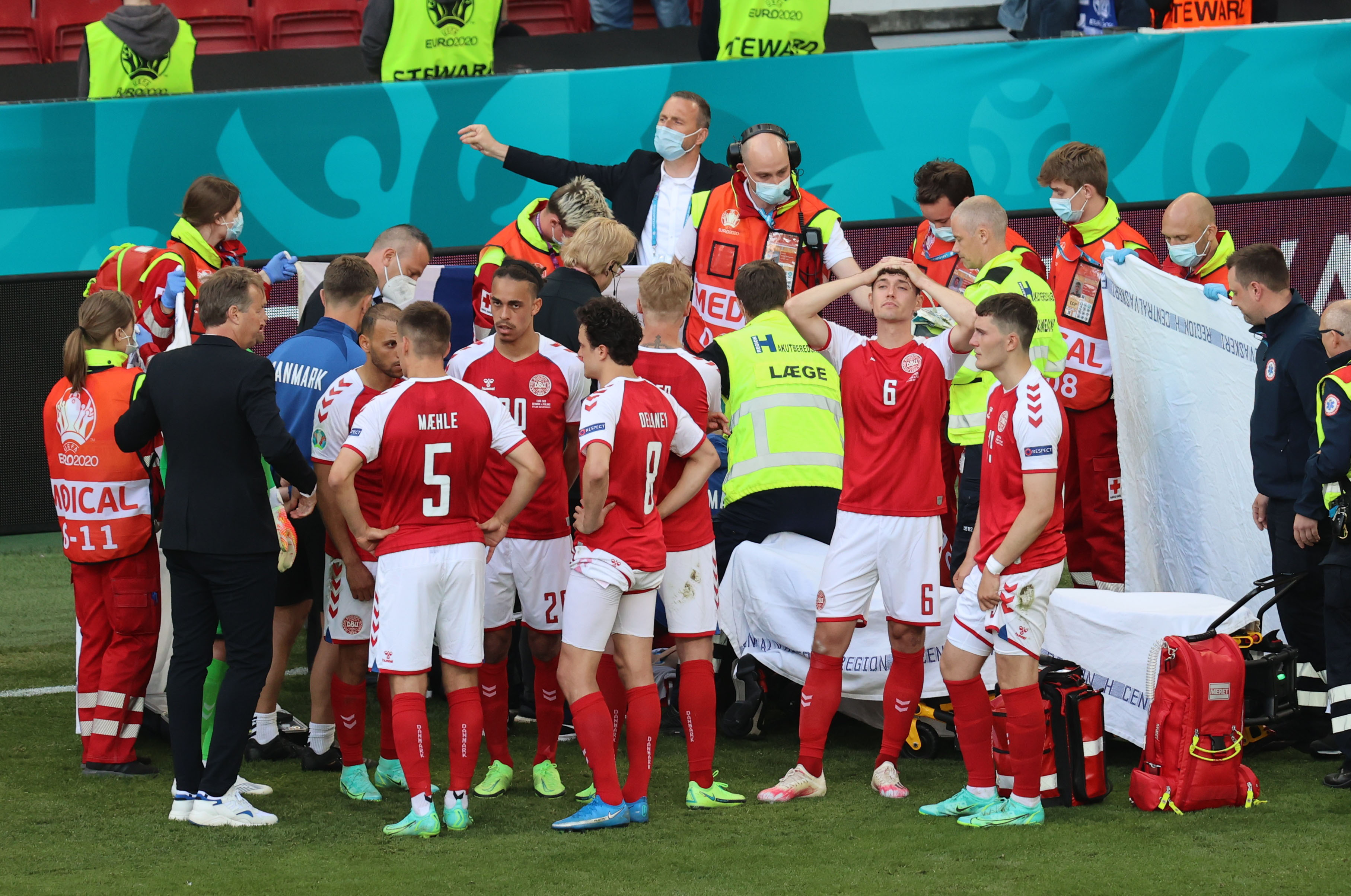 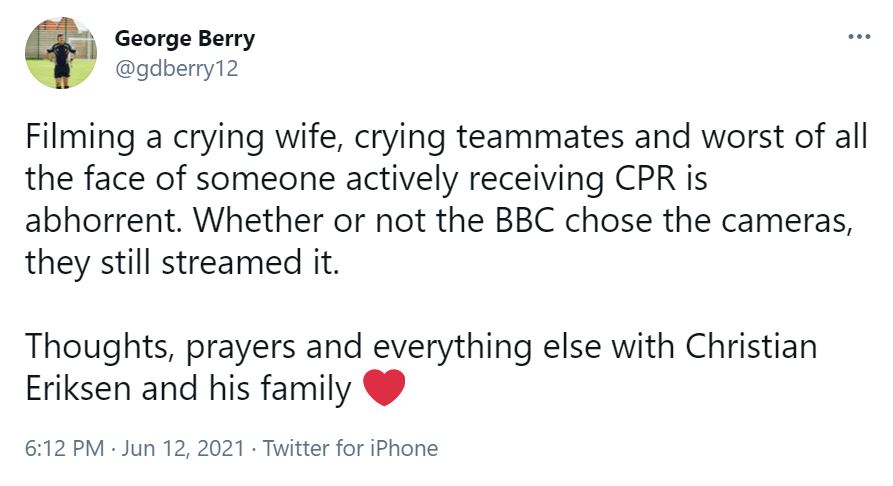 One viewer described the move as "unacceptable" while another said the BBC had "traumatised an entire nation".

Another tweeted: "I’m not sure why they didn’t stop the cameras & go straight to the studio as soon as they saw he was getting CPR.

"I feel physically sick having watched this in real time. God I hope he’ll pull through. Only 29."

While one commented: "BBC need to think harder about privacy issues and react better when something this horrendous happens live on TV.

"Unacceptable to broadcast wife crying and a man receiving CPR."

The shocking scenes happened towards the end of the first half of the match.

Upset fans in Copenhagen's Parken Stadium looked on in horror as medics tended to the former Inter Milan ace.

His distraught teammates formed a circle around him, with some in tears.

UEFA has announced the Group B game has been suspended due to a "medical emergency".

As well as filming his medical treatment, footy fans have blasted the BBC for showing Eriksen's wife crying.

Sabrina Kvist Jensen was seen in tears while being consoled by Danish players after she rushed down to the pitch.

One viewer said they were "utterly disgusted" by the decision to show her on screen.

Another posted on Twitter: "It's absolutely atrocious how the BBC kept filming after all that was happening, no respect at all."

And one commented: "Camera man at bbc needs to give his head a wobble filming #Eriksen on the floor and his wife crying her eyes out." 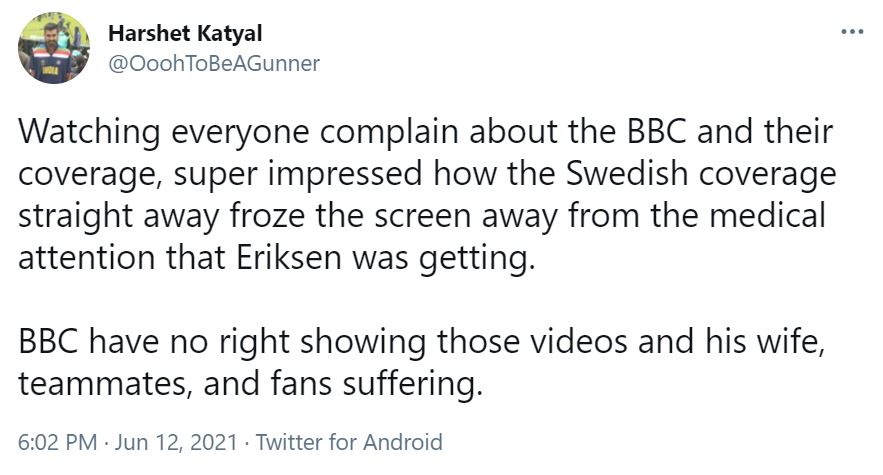 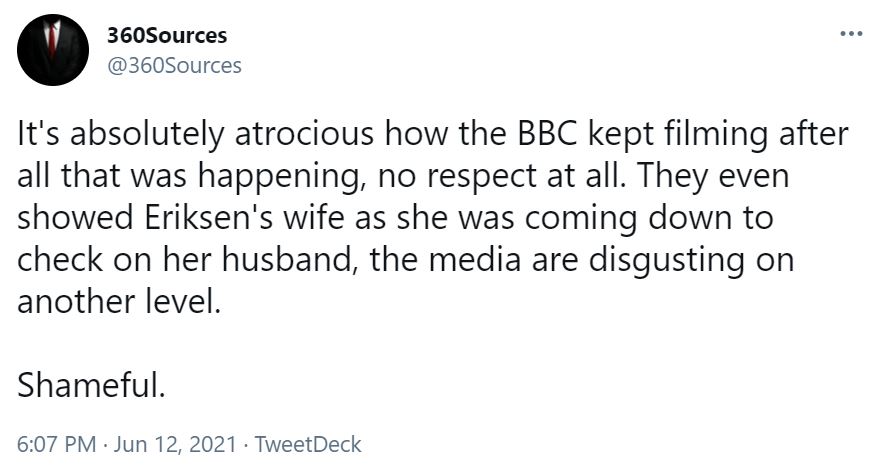 BBC coverage of the game has now ended after the distressing scenes were shown to viewers across the country.

Commentator Jonathan Pearce said: "The pictures you are seeing here in the Parken Stadium in Denmark are terrible."

Both teams left the field with officials holding up sheets to hide Eriksen from view.

The stadium announcer told fans that the game had been suspended due to a medical emergency and to stay in their seats.

There has been an outpouring of messages from well-wishers for Eriksen following this evening's distressing images.

Marcus Rashford tweeted a prayer and a Danish flag emoji. 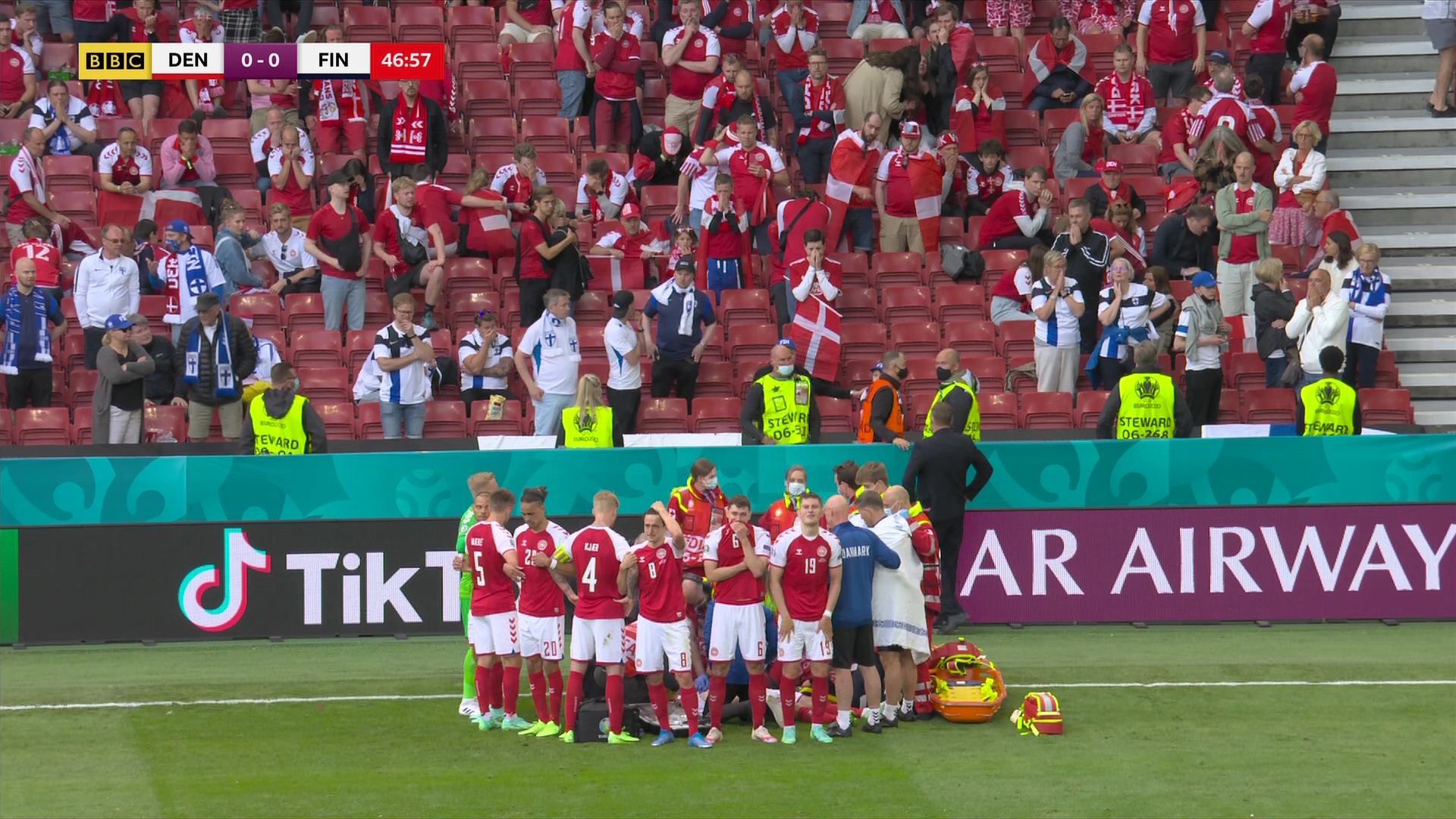 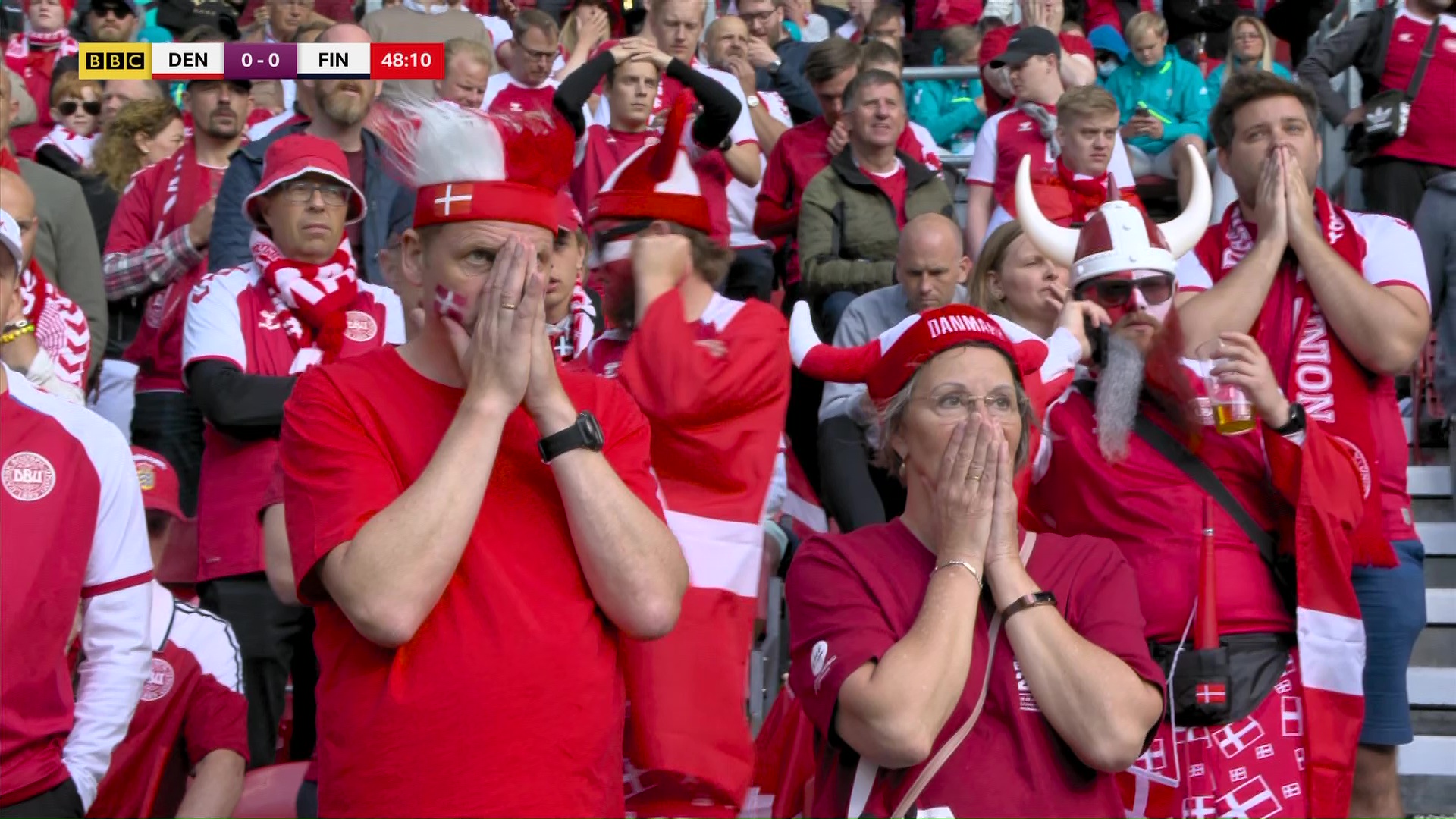