THE frantic, jam-packed 2020-21 season is rapidly drawing to a close – and there is still so much to play for.

The race for European qualification is really started to heat up in England, Germany and Italy. 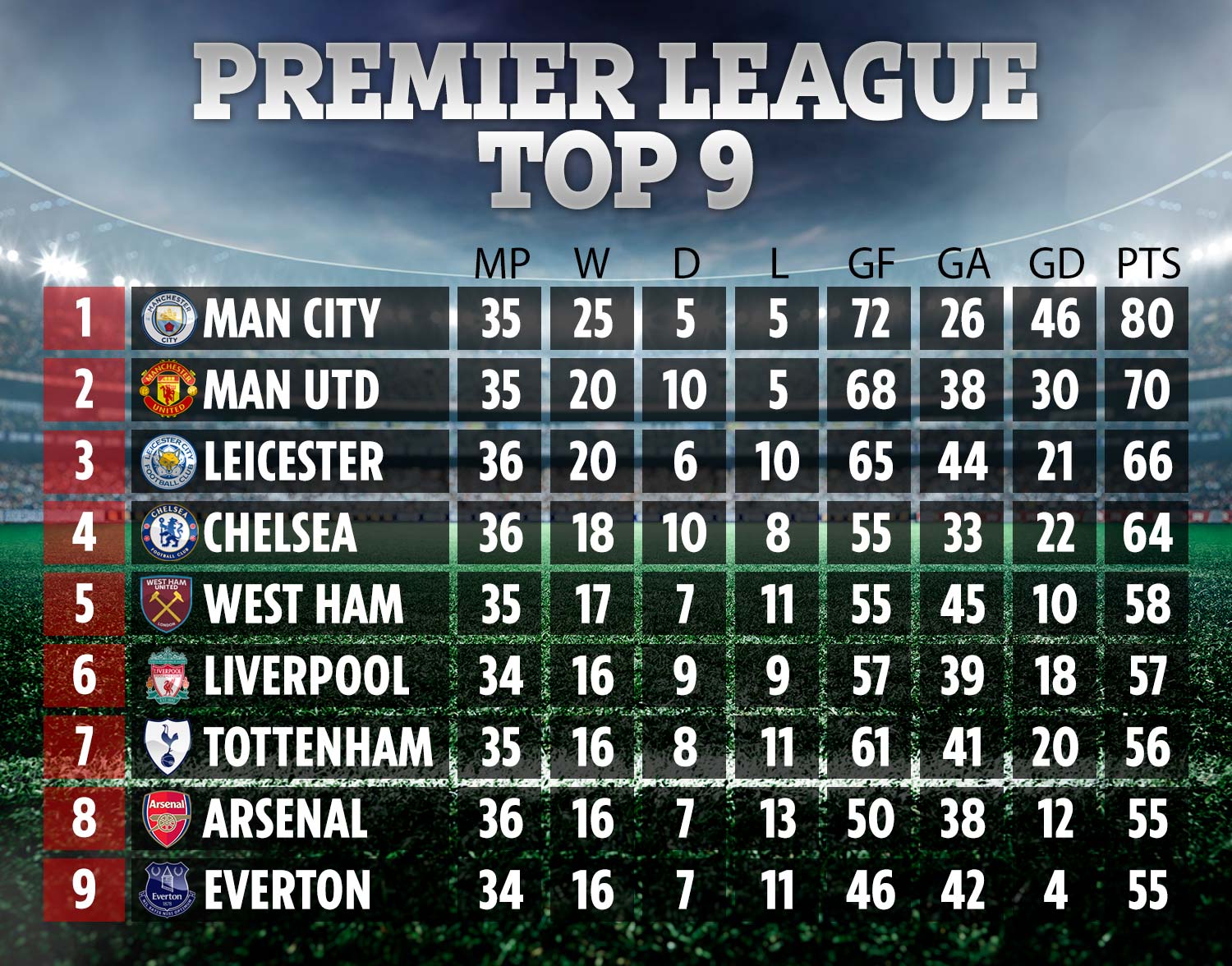 But clubs in Spain, France and Turkey are still fighting it out for the title in what should be a thrilling finale.

With just a handful of games to go, check out all SIX tables and what's on the line, below…

MANCHESTER CITY stormed to the title after meekly surrendering their crown to Liverpool a year ago.

They were confirmed champions after Manchester United's second-string lost 2-1 to Leicester on Tuesday.

And while the title race is settled, the race for a European spot is well and truly on.

Chelsea slipping up 1-0 at home to Arsenal threw open the race for Champions League, Europa League and Europa Conference League places once again. 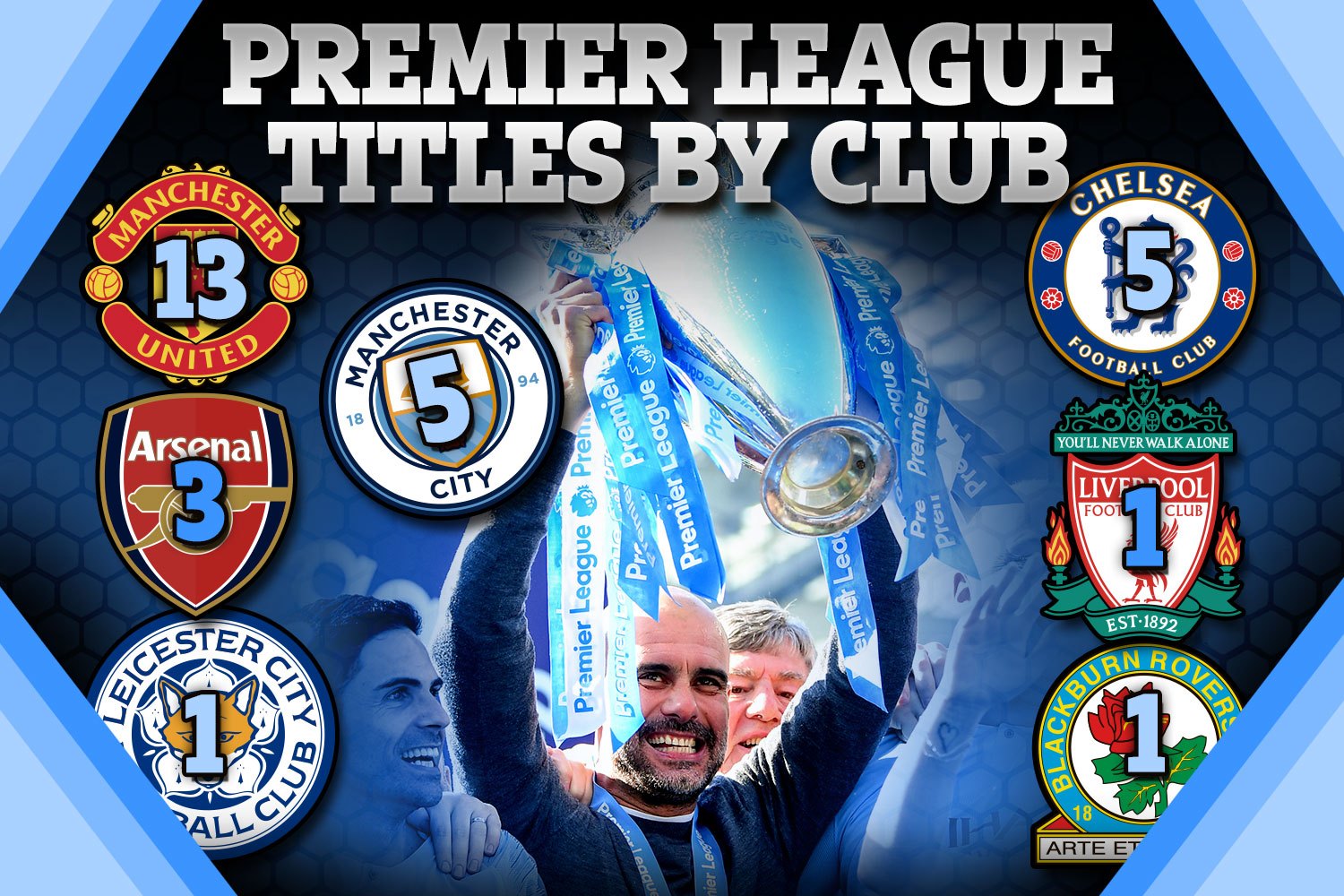 Man Utd's title race is over, but their Champions League spot is confirmed.

And while Leicester's win over United all-but confirmed their place at Europe's top table next season, they know Chelsea, West Ham and Liverpool are all hot on their tail.

Just two of those four can bag a Champions League spot, with Liverpool able to go within ONE point of the Blues and three of the Foxes should they win their two games in hand.

However, one of the Reds' games is against Man Utd on Thursday night at Old Trafford in what is essentially a make-or-break game.

Further down, Tottenham, Everton and Arsenal are all fighting it out to snatch up a European spot – with the ninth-placed Toffees just three points behind fifth-placed West Ham with a game in hand to come. 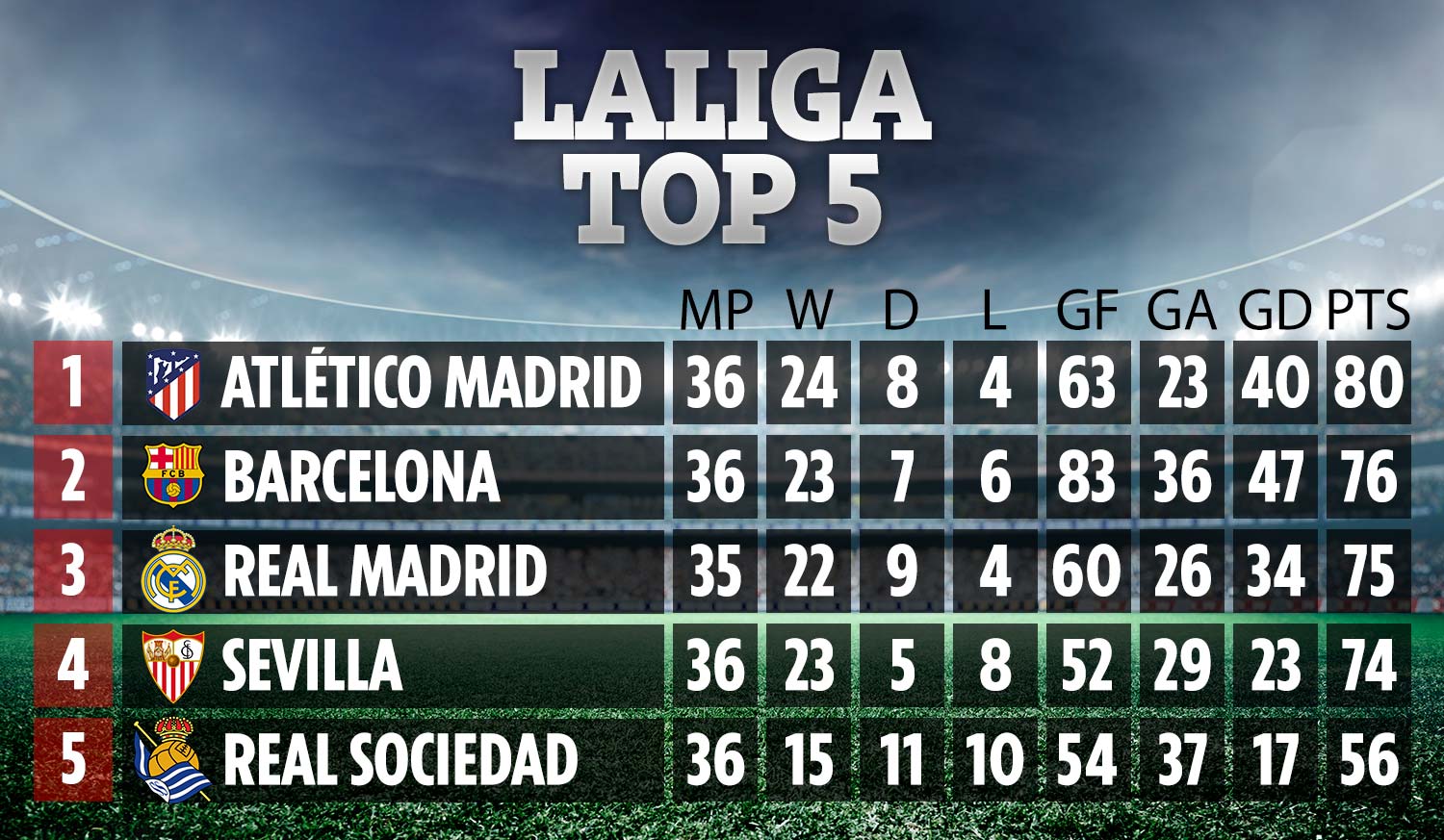 IT'S been tight for a long time – but Atletico Madrid may have finally just about snatched the LaLiga crown from rivals Real.

Diego Simeone's men clung on for a 0-0 draw with Barcelona at the weekend before holding on to beat Real Sociedad 2-1 on Wednesday night.

The Argentine boss erupted in wild celebration after the midweek victory knowing that moved them four points above Barca – who drew 3-3 with Levante to slip further adrift.

Real Madrid – who dropped points in the 2-2 draw with Sevilla at the weekend – play Granada on Thursday night knowing they must surely win to keep the pressure on.

A victory would move Los Blancos just two points behind Atletico with two games to play.

However, Real must face Athletic Bilbao away before hosting Europa League finalists Villarreal on the final day in a tough run in.

Atleti should pick up maximum points from those matches, hosting Osasuna before finishing the season with a visit to Real Valladolid.

But this LaLiga season has been anything but predictable. 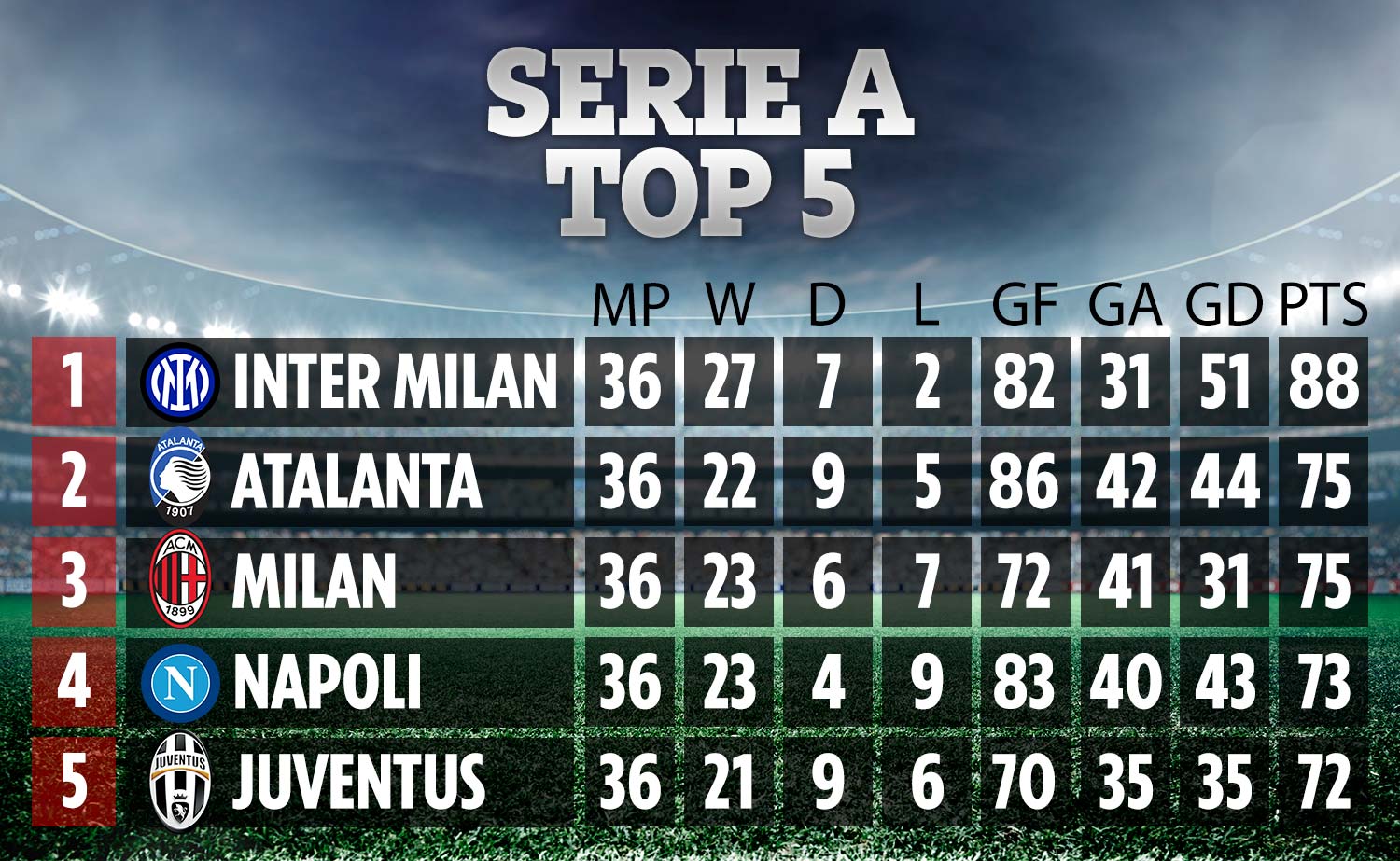 INTER MILAN deservedly stormed to the Serie A title with Romelu Lukaku and Co starring under Antonio Conte.

The victory snapped Juventus' nine-year winning streak – with the Old Lady unthinkbaly on the bring of missing out on Champions League football next season.

In the summer of 2018, Juve splashed out to the tune of £99million to sign Cristiano Ronaldo in a bid to win their first European Cup since 1995-96.

Instead, Juve have endured back-to-back last-16 exits – and now sit FIFTH in Serie A with two games to play.

Andrea Pirlo's men are just one point behind Napoli in fourth and three points adrift of AC Milan in Atalanta in third and second respectively.

Milan particularly seem in determined mood, thumping Juventus 3-0 away on Sunday before putting SEVEN past Torino on Wednesday.

But Zlatan Ibrahimovic and Co face Atalanta on the final day of the season in a genuine six-pointer.

Someone – or both – will drop points, potentially opening the door for Napoli and Juventus.

Juve, though – who beat Sassuolo 3-1 on Wednesday to keep pace – face Inter in the penultimate game of the season with Napoli boasting the easier run-in.

Strap yourselves in, this race for top-four is going to be a nail-biter. 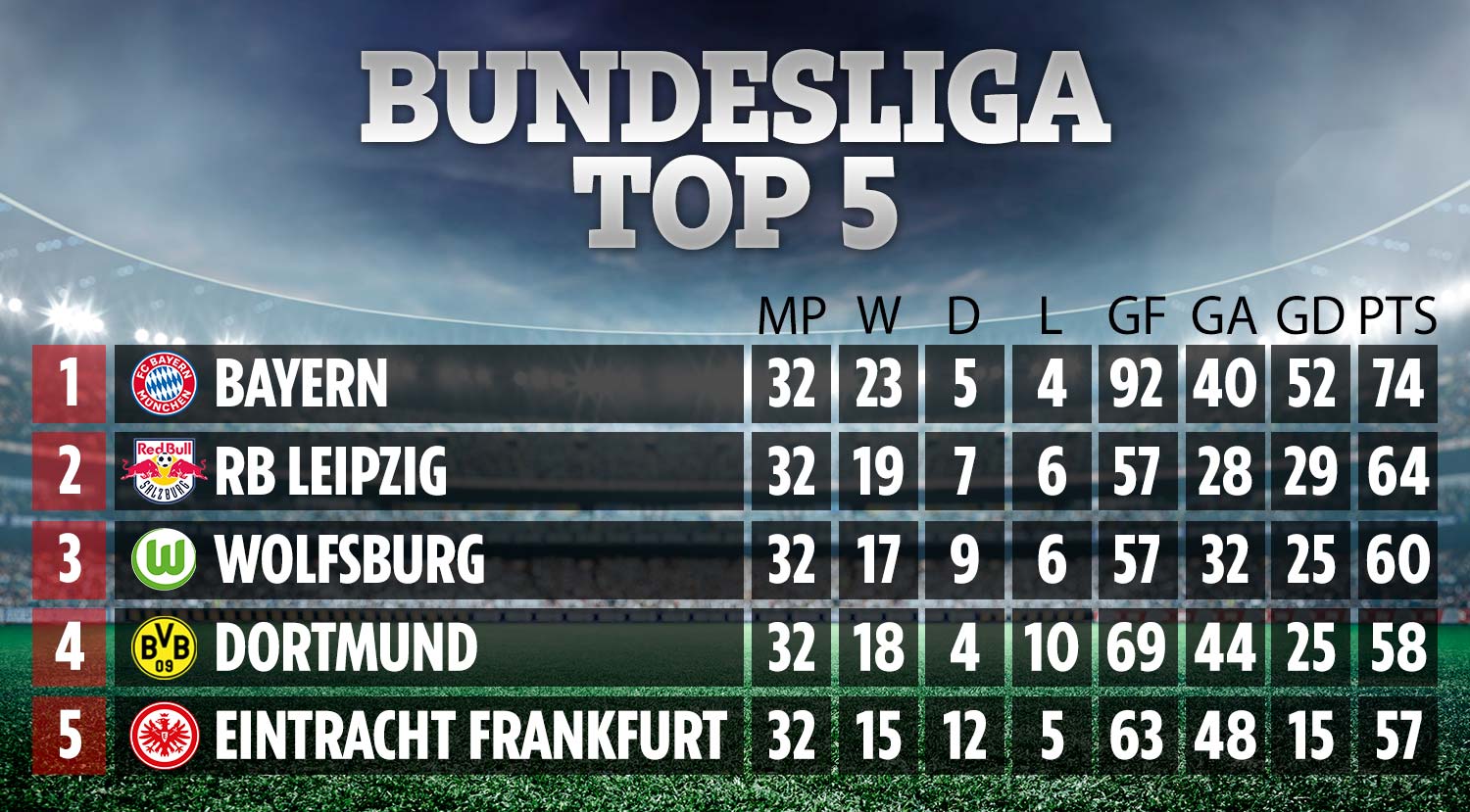 BAYER MUNICH are champions of Germany once again after outlasting RB Leipzig to win yet another Bundesliga crown.

But with two games to play, the race for Champions League football is very much on.

Borussia Dortmund, who for a time looked destined to miss out on the top-four, have recovered well in recent months.

Edin Terzic's side now sit fourth just ONE point above Frankfurt with just six points left to play for.

But in a huge twist, Wolfsburg must travel to second-placed Leipzig in their penultimate game before hosting Mainz. 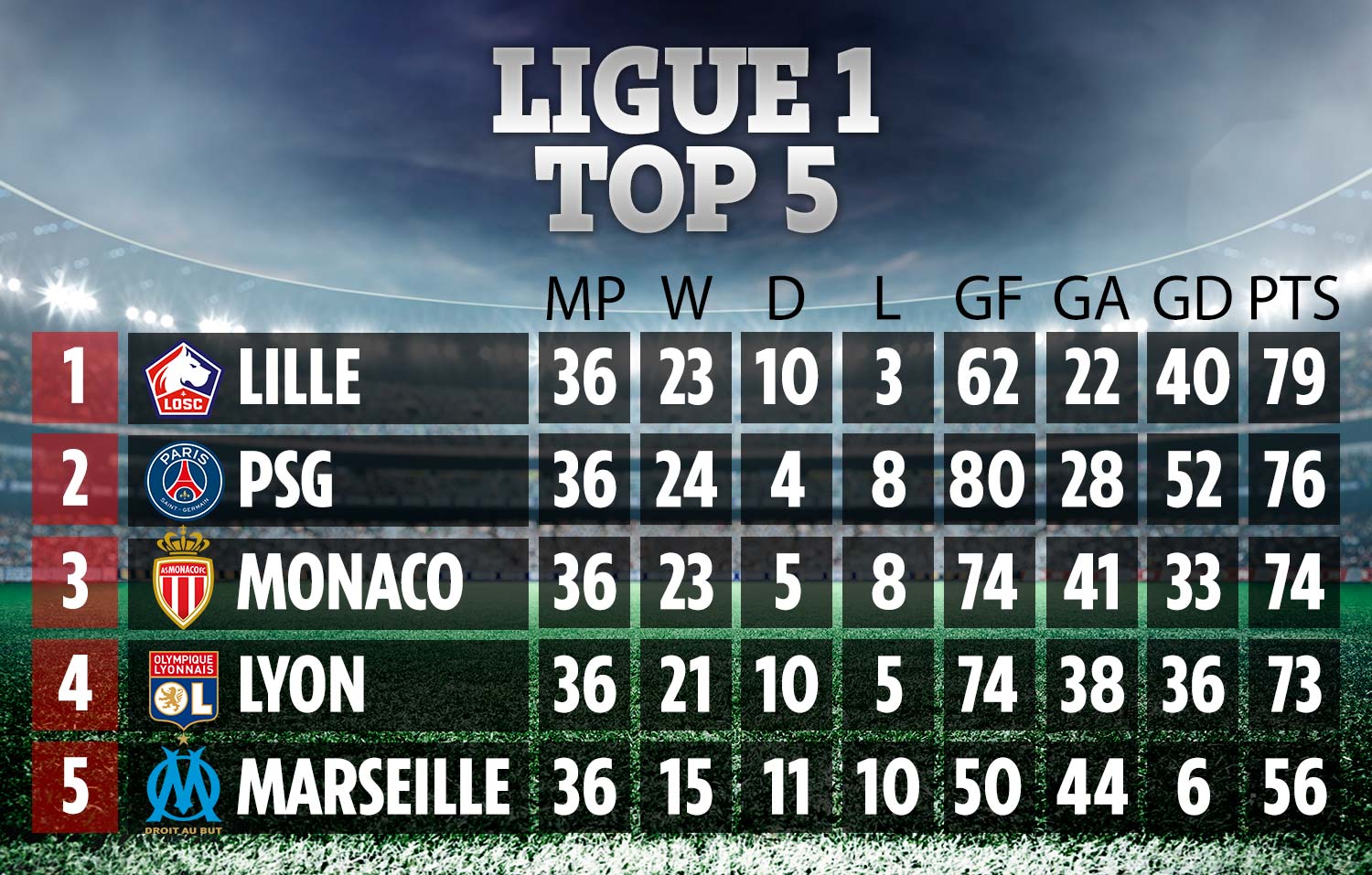 IT'S almost as unthinkable as Bayern not clinching the Bundesliga title these days, but Paris Saint-Germain MIGHT not be crowned champions this season.

And while the club's form has been solid, they still sit three points behind league-leading Lille with just TWO games to play.

And PSG could slip as low as fourth, too, with Monaco two points adrift in third and Lyon only a further point back.

The Paris giants will be buoyed in the knowledge they play Reims and Brest – 13th and 14th respectively – in their final two games.

Lille have a marginally tougher run-in, playing Saint-Etienne (11th) and Angers (12th) – but would expect to win both.

Lyon face Nice in one of their games, while Monaco must take on Rennes (7th) and Lens (6th) in a tough final pair of games. 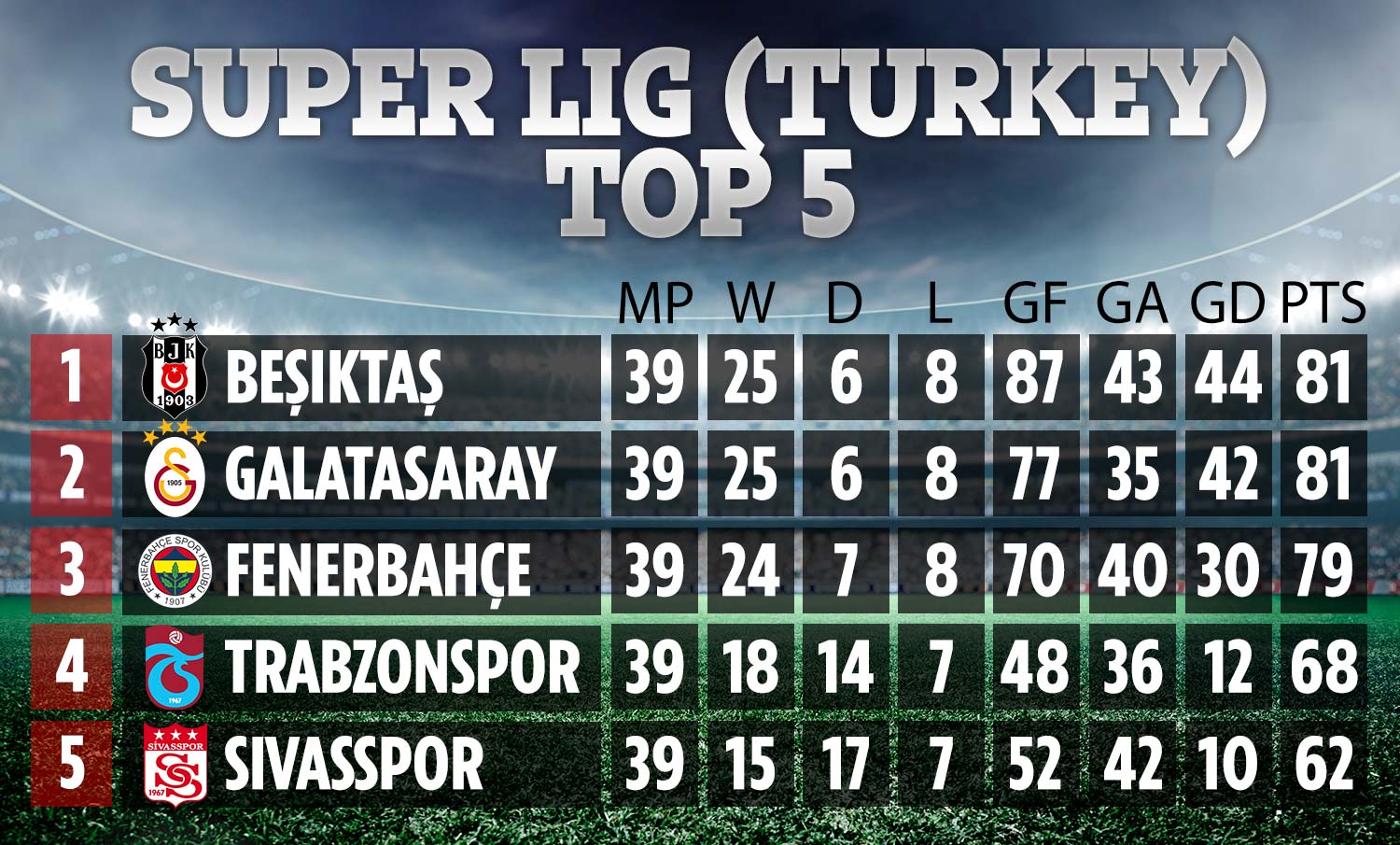 IF you thought the title races in France and Spain were close, just check out Turkey.

Besiktas and Galatasaray sit level on points with just ONE game to go.

And Mezut Ozil's Fenerbahce are just two points off as they chase a dramatic final-day victory.

With just two teams going into the Champions League qualifiers, there's more on the line than just the title.

Fenerbahce will fancy their chances of picking up all three points as they face 17th-placed Kayserispor.

But their opponents will be fighting tooth and nail themselves, as tey risk being relegated on the final day.

Besiktas have a slightly trickier game too, facing tenth-placed Goztepe away.

The Super Lig leaders will also have one eye on the Turkish Cup final three days later.