Jose Altuve, the Houston Astros’ second baseman, turned 31 on Thursday. No one would have expected Yankees fans to serenade a star of a reviled rival with a rendition of “Happy Birthday,” but simply ignoring the event would have been preferable for Altuve during his team’s 7-4 win at Yankee Stadium.

“Your birthday,” chanted Yankees fans, with a colorful expletive before “your.”

Two weeks ago, Yankees fans treated their favorite team in a similar fashion. They booed liberally, and perhaps rightfully so: The Yankees had a 6-11 record on April 21, and Giancarlo Stanton — a frequent target of their ire given his talent, huge contract and checkered injury history — was hitting .158.

Over the past few days at Yankee Stadium, the reactions were almost exactly the opposite. In two weeks, the Yankees went from arguably the most disappointing team in baseball to the hottest. And it certainly helped that the hated Astros were playing in front of fans in the Bronx for the first time since Major League Baseball revealed last year that they had cheated during their 2017 World Series-winning season.

While Yankees players and Manager Aaron Boone largely downplayed any lingering anger toward the Astros, their fans still hadn’t had their say. They didn’t get to see the Astros in person during the coronavirus pandemic-shortened 2020 season: The Yankees played only teams from the American League and the National League East, and games were staged in front of empty stands. Few teams, after all, had lost out to the Astros quite like the Yankees. They fell to Houston in the American League Championship Series in 2017 and, and Yankees slugger Aaron Judge finished second to Altuve in the voting for the 2017 A.L. Most Valuable Player Award. 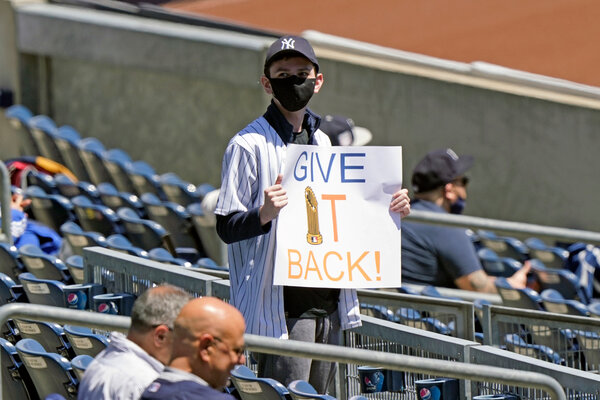 So from Tuesday to Thursday, the Astros were met with jeers and mocking signs from limited-capacity crowds of about 10,000 to 11,000 that felt many times bigger, while the Yankees and Stanton were constantly showered with adulation, having improved to 16-15 and made the first three weeks of April a distant memory.

“We weren’t going to play like the beginning of the season forever,” said Stanton, speaking not only for his teammates but also for himself after Tuesday’s 7-3 win. He added later, “This is a game where if you get behind, you can’t just catch up in one or two at-bats, so you got to stack good at-bats and feed off the rest of the lineup.”

On Thursday, Stanton crushed a home run off Astros starter Lance McCullers Jr., raising his season batting average to .312 and drawing “M-V-P!” chants. During his 12-game hitting streak, Stanton is batting .481 (25 for 52) with six home runs. He homered in each game against the Astros this week.

Although Stanton has been the biggest reason for the Yankees’ offensive resurgence, he has had some recent help from sputtering hitters like Aaron Hicks (who raised his average to .220 with three hits on Thursday) and Clint Frazier (who smashed a tiebreaking two-run home run in the fourth inning). And even though Judge has cooled off at the plate this week, Yankees fans chanted “M-V-P!” when he was batting on Tuesday as if to mock Altuve.

Improved hitting and defense, notably by shortstop Gleyber Torres, over the past two weeks have helped stabilize a Yankees team that has been guided by its pitching staff. Mostly because of their best-in-baseball bullpen, the Yankees had the best earned run average (3.01) in the A.L. entering Thursday.

The Gerrit Cole-led starting rotation has found a capable complement in Corey Kluber (3.03 E.R.A.), a high-risk, potentially high-reward signing by the Yankees over the winter. In a 2-0 win over the Detroit Tigers on Sunday, Kluber turned in arguably the best performance by a Yankees starter this season: eight scoreless innings and 10 strikeouts.

Cole, the A.L.’s pitcher of the month for April because of his 1.43 E.R.A. and 62 strikeouts, was solid against his stout-hitting former team on Thursday: allowing just two runs, both of which came on solo homers by Yordan Alvarez, over seven innings.

Uncharacteristically, though, the Yankees lost on Thursday because their relievers stumbled. In the eighth inning, Chad Green coughed up a go-ahead three-run home run to Altuve, who had been 2 for 11 in the series and faced “cheater!” taunts right before his swing. In the ninth inning, the lefty Justin Wilson gave up a two-run blast to Houston catcher Martin Maldonado.

Other Astros hitters remain from the 2017 squad, like third baseman Alex Bregman and shortstop Carlos Correa, and they were also taunted during the series at Yankee Stadium, but none like Altuve, the longest-tenured Astro.

“At least there wasn’t any violence,” Astros Manager Dusty Baker said after Tuesday’s game, in which Altuve heard expletives shouted at him throughout the night, even while on defense. “They can say whatever they want.”

Said Stanton: “That was intense. I wouldn’t want to be on the other side of that.”

All series long, Stanton and his teammates said the atmosphere felt more like the playoffs even though the capacity was capped at 20 percent because of pandemic restrictions. “Over the course of the season, you play regular-season games that feel bigger, and these felt a little bigger,” Boone said.

Altuve said after Thursday’s Houston victory, which ended a three-game losing streak, that he was happy to help his team win regardless of the opponent, but that his teammates were particularly thrilled to see him succeed. “It meant a lot for us in the dugout,” McCullers said.

It did not go over so well in the stands of Yankee Stadium. After Altuve’s go-ahead blast, the fans booed louder than before. But this time, when Stanton grounded into a double play to end the game, he heard none of the same from a crowd that has warmed up to him and to the team.