Two fans traded blows in the stands as a brawl broke out during Aussie Kyrgios' win over Karen Khachanov. 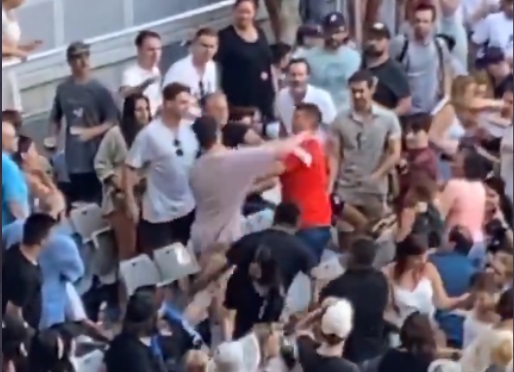 One supporter was evicted from the Melbourne Arena, being used instead of the Rod Laver Arena.

Other members of the public stepped in to try and stop the fight.

Security officers then came over to stop the brawl.

Kyrgios had requested to play in the smallest of Melbourne's three arenas because of the atmosphere at the Australian Open.

Fellow Aussie John Millman had also urged fans to get drunk and rowdy when his match in the same arena was played.

"I like feeding off the crowd's energy. I try to bring that physicality, and sometimes you need that little bit of motivation on the sidelines.

"I love playing on that court, actually, in Show Court Three. I have had some really good moments there. And, you know, the more rowdy they are, the drunker they are, the better!"

World No30 Kyrgios won the first two sets 6-2, 7-6 in his third-round match against Russian Khachanov.

The controversial Aussie is his nation's last hope in the tournament.

He said prior to the match: "I'm not even thinking about winning the Grand Slam at the moment. I just want to day by day get better on and off the court.

"I'm not thinking about winning the Grand Slam. Like, that's not essential for me at this moment in time."