MIAMI GARDENS, Fla. — The story of Juan Ponce de León searching for a fountain of youth in Florida may be apocryphal, but this week at the men’s event of the Miami Open, there seems to be something revitalizing in the water.

Felix Auger-Aliassime, an 18-year-old Canadian qualifier, is the youngest man to reach the semifinals in the tournament’s history. And his compatriot and friend Denis Shapovalov, 19, will seek to join him in the semifinals when he faces the American Frances Tiafoe, 21, in a quarterfinal on Thursday afternoon.

Auger-Aliassime, ranked 57th, booked his spot in the semifinals with a 7-6 (3), 6-2 win over 11th-seeded Borna Coric on Friday night. Coric, 22, was eight years younger than the next-oldest quarterfinalist, but still far more experienced than Auger-Aliassime, who is in the main draw of a Masters event for just the fifth time.

“Playing Borna, who’s been established for a few years now, I definitely didn’t expect to win,” Auger-Aliassime said, adding that he was especially surprised with how he was able to control the second set after a grueling opening set that lasted more than an hour.

“I felt like I had margin over him, had a bit of an edge,” he added. “I just felt really comfortable out there from the first balls.”

Excitement and expectations preceded Auger-Aliassime years before he was ready for the professional tour. He was a highly touted junior by the time he turned 15; his matches on small courts at the 2015 United States Open were swarmed with scouts and sponsors.

His potential, evident then, is clearer now. Like many in his generation, Auger-Aliassime is comfortable on all parts of the court; he hit a particularly convincing sliding forehand volley winner to extend his lead to 2-0 in the second set.

His on-court flair extends to the normally rote postmatch rituals, too. When Auger-Aliassime signs his initials on the TV camera lens after a win, it at first appears as if he is writing the name of a fraternity someone his age might be pledging: Gamma Lambda Lambda — “ΓΛΛ” — before striking through the letters to create a stylized “FAA.”

Ranked 182nd a year ago, Auger-Aliassime, who grew up in Montreal, broke into the top 100 after reaching the final of the ATP tournament in Rio de Janeiro in February. He is poised to be ranked 33rd on Monday and would crack the top 20 if he wins the title on Sunday.

Auger-Aliassime and Shapovalov are the second and third teenagers to reach the Miami Open quarterfinals since 2007, when Andy Murray and Novak Djokovic did (Alexander Zverev did it in 2017). Murray, Djokovic and the eight teenage boys to achieve the feat before them went on to reach the No. 1 ranking and win at least one Grand Slam title. (A 17-year-old Rafael Nadal first beat Roger Federer in Miami, in 2004. He reached the final the next year.)

“Obviously it’s a privilege to be compared to all these great players,” Auger-Aliassime said. “I think it just shows that I’m doing good things, I’m on the right track. 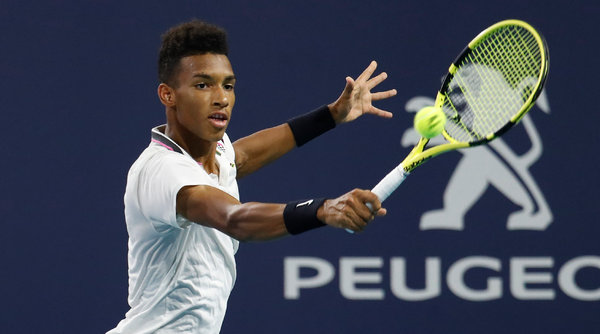 “But, yeah, I think I’m seeing the long term, and right now I’m just enjoying every day, enjoying every match, because you never know what’s going to happen next.”

Auger-Aliassime’s success in Miami comes on the heels of another surprising run by an 18-year-old Canadian: Bianca Andreescu’s title last week in Indian Wells, Calif.

As women’s tennis is being lifted by the breakthroughs of young players like Andreescu and Naomi Osaka, men’s tennis has been eagerly awaiting new blood as players in their 30s like Djokovic, Federer and Nadal continue to dominate the tour.

While four quarterfinalists in Miami are 22 or younger, the other four are 30 or older.

The ATP began a campaign few years ago to highlight its “Next Gen” players and created a year-end tournament for them. .

Zverev, now 21, is ranked third, but has struggled in Grand Slam tournaments. Stefanos Tsitsipas, 20, has risen to No. 10, spurred by a run to the Australian Open semifinals that included a win over Federer.

Shapovalov had his breakthrough moment at the 2017 Rogers Cup in Montreal, beating Nadal, ranked No. 1 at the time, en route to reaching the semifinals as a 17-year-old. He then reached the fourth round at the U.S. Open.

Tiafoe, 21, is in his first Masters quarterfinal, backing up his quarterfinal run at the Australian Open in January.

There is hope that this tournament is further evidence that reinforcements are finally ready to replenish the men’s tour.

Auger-Aliassime will face seventh-seeded John Isner, 33, on Friday for a spot in the final. Auger-Aliassime’s record against top players is limited but spotless: he is 5-0 against top-20 opponents.

How Auger-Aliassime’s form will translate into Grand Slam tennis played over best-of-five sets is still an open question. At last year’s U.S. Open, his only main-draw appearance at a major, he retired in the third set of his first-round match against Shapovalov because of heart palpitations.

Federer, 37, remains the oldest player in the draw. He will play his quarterfinal match against Kevin Anderson, 32, on Thursday night.

Federer turned 19 the day Auger-Aliassime was born. Federer said he enjoyed seeing members of the young generation square off against one another, particularly savoring the fourth-round match between Shapovalov and Tsitsipas, which was decided in a third-set tiebreaker.

“I loved seeing them slug it out, and I’m sure they are going to have big matches down the road,” Federer said. “I like when they also have to play each other a little bit, because they don’t look across the net and see a guy ranked whatever it is. It’s just another guy they know from the juniors, and ‘I’m just going to beat you up now.’”