Matt Dale knew it might be the day, but he didn’t want say it about his best horse Fell Swoop.

It had been 959 days between wins for the horse that finished second and third in two of Chautauqua's TJ Smith triumphs. It had been that long that he might have forgotten what the winner’s stall looked like.

But the Razor Sharp Handicap at Randwick on Saturday was the right place, right time and right track. 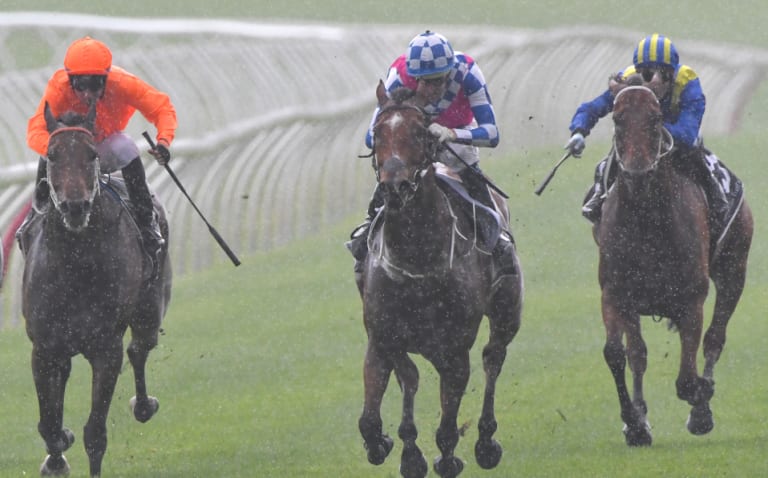 “He is the rightest, if that’s a word, I have had him in a couple of years,” Dale said. "When he is right he is very good.

“Everything went in his favour because he loves that soft track and being allowed to get into his rhythm and flow and lead.

“You have to remember those two TJs and that is where I thought I had him coming here today.

“It is a very proud moment for me and my team because of the work that has gone in to get him back winning.

"He is the best horse I have had and you want to see them winning.”

It was a winning double for the Canberra trainer after Sei Stella saluted in the opening race with Hugh Bowman in the saddle. Bowman went on to notch a treble after winning the Inglis Nursery on Accession and producing a gem of a ride on Deprive for Godolphin.

Dale had been pleased to book Bowman because the star jockey knew Fell Swoop and what was best for him.

“Everyone had Cradle Mountain leading but I said to Hugh don’t be worried to let him flow and keep the front,” Dale said. “That's why I wanted him to ride him because he knew that would help him.

"He did that and you saw what Fell Swoop can do.”

Fell Swoop held the inside from the barrier and topping the rise had a margin on favourite Cradle Mountain, which became two lengths by the post, with Firsthand running into third.

“He just got comfortable and when he is like that he is a proper horse,” Bowman said. “He felt really good.

“I've certainly figured in some close finishes on him, the Manikato comes to mind a couple of years ago when I was narrowly beaten on him.

“That’s a Group I weight-for-age race and he’s come here this afternoon carrying less weight than that.

“I think he went better, which says a lot for Matty and where he’s got him.

“Matt’s a great trainer. He doesn’t aim at the stars too often but when he gets the right horse he can certainly manage it.”

Cradle Mountain should lose no admirers with his game effort chasing Fell Swoop. Jason Collett chose to sit off Fell Swoop and felt at the top of the straight Cradle Mountain would acceleration past him.

“I was happy in the run because I thought he would have the dash to go past him,” Collett said. “He wasn’t that happy on the soft track and was never really on the bridle.

“He kept trying but it wasn’t his day. He was chasing a group 1 horse, which liked the conditions, so it wasn't too bad."