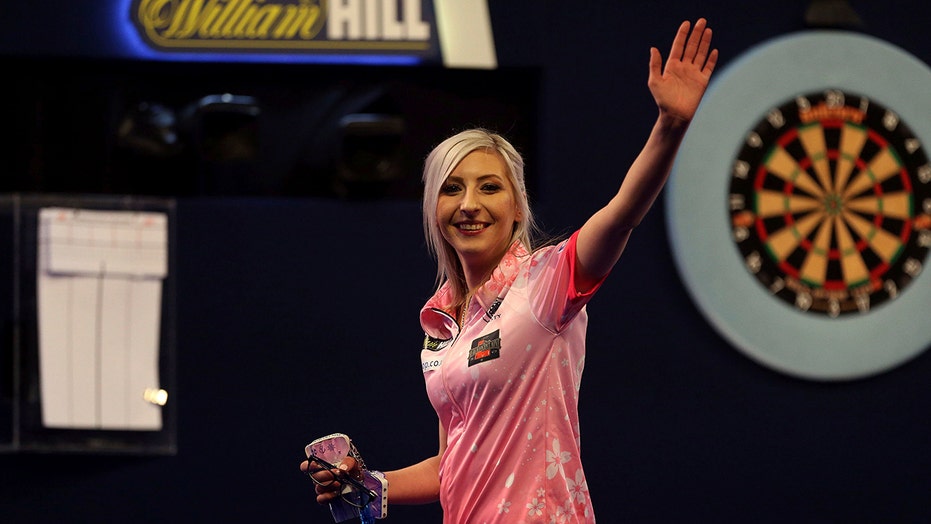 Fallon Sherrock put her right hand over her mouth in sheer astonishment as a raucous darts crowd celebrated behind her.

Another wild night, another stunning win for the Queen of Alexandra Palace.

Four days after becoming the first female darts player to beat a man at the PDC World Championship, she did it again Saturday – this time eliminating No. 11-ranked Mensur Suljovic with a 3-1 win in the second round.

The 25-year-old Englishwoman c linched victory against Suljovic by hitting a bullseye.

“I'm still waiting for it all to sink in," said Sherrock, a one-time professional hairdresser who first picked up a dart when she was aged 17. “I don't know how I'm going to sleep tonight.”

Now she believes she can go all the way.

When asked if she could win the tournament, Sherrock said: “Why not? I have won two games, I am just going to take each game as it comes but there is nothing to say that I can't. I am going to try.

“I have just proved that we (women) can beat anyone. I have beaten two of the best players in the world. If that doesn't show that women can play darts, I don't know what does.”

Sherrock, a former runner-up at the women's world championship, will play Chris Dobey in the last 32.

Organizers decided for the first time last year to allocate two of the 96 places in the world championship field to women. Previously, women could attempt to qualify for the event, but now spots are guaranteed.

Women's world champion Mikuru Suzuki took James Richardson to a sudden-death leg in the fifth set before losing on Monday.

Three other women – Gayl King, Anastasia Dobromyslova and Lisa Ashton – have previously played matches at a PDC World Championship. They all lost in the first round

Sherrock is guaranteed to win at least 15,000 pounds (nearly $20,000) after beating Suljovic, who congratulated his opponent before quickly exiting the stage. The Austrian has won multiple tournaments in his career, is a former World Matchplay runner-up, and has been in the last 16 at the world championship three times.

After her first win this week, Sherrock became an overnight celebrity, appearing on some of the biggest TV and radio shows in Britain and getting a blue tick next to her name on her Twitter account.

Sherrock developed a serious kidney condition after giving birth to her son, Rory, five years ago. She had to take medication and one of the side-effects was the swelling of her face, which led to her receiving abuse online for her appearance. She says she drinks water on stage during matches to flush out her kidneys.