Since proposing several major changes to the sport's calendar this past spring, Infantino has spent months travelling the world hosting mini-summits with the leaders of FIFA's 211 member federations. 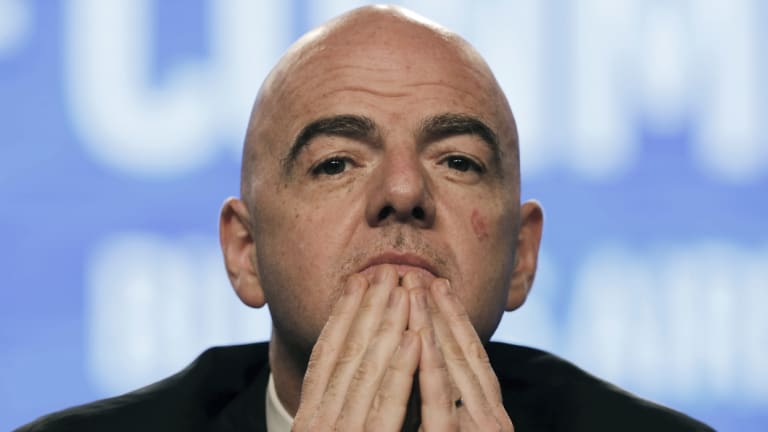 His goal is to win support for a proposal to introduce two new tournaments — an expanded Club World Cup for clubs and a new league for national teams — that would be underwritten by a $25 billion offer from a group led by the Japanese conglomerate SoftBank.

The listening exercise follows repeated failures by Infantino to force the proposals through FIFA's governing council, but if they are approved they would represent the biggest changes to soccer in a generation, and their adoption — and the multibillion-dollar cash infusion to FIFA — would provide Infantino with a signature success before his bid to secure a second term as FIFA president later this year.

Each of the meetings on Infantino's tour, including the most recent one held in Marrakech, Morocco, has included about 50 federation leaders from across soccer's six regional confederations. At the end of each session, the federation representatives are handed electronic tablets and asked to select their preferred options for the new tournaments.

Infantino's problem is that European officials attending the meetings have stubbornly refused to offer any opinions. Instead, they have told Infantino and his team that the feelings of Alexander Ceferin, the president of the European governing body, UEFA, and his governing council represent their views.

Some of the Europeans balked because the list of options for the Club World Cup did not include the option of not holding the tournament, which is often an annoyance for the European champion who attends, at all. On FIFA's tablets, voters are asked to pick from only three choices: a tournament with 16, 24 or 32 teams.

Ceferin, under pressure from clubs and federations in Europe, has clashed repeatedly with Infantino over the proposed changes both to the Club World Cup and to the broader global soccer calendar, with Ceferin most frustrated by new initiatives that could challenge the hegemony of existing club tournaments like UEFA's Champions League and add to the workload of players.

"I cannot accept that some people who are blinded by the pursuit of profit are considering to sell the soul of football tournaments to nebulous private funds," Ceferin said in a speech in May. "Money does not rule — and the European sports model must be respected. Football is not for sale. I will not let anyone sacrifice its structures on the altar of a highly cynical and ruthless mercantilism."

Infantino first presented details of a plan for an expanded Club World Cup at a FIFA Council meeting in Bogota, Colombia, in March 2018.

Citing a nondisclosure agreement, he refused to identify the financial backers of the proposal, which are believed to include not only SoftBank but also financing from the Middle East, which Infantino eventually denied was directly linked to sovereign wealth funds (Saudi Arabia remains the biggest individual backer over Softbank's Vision Fund, the biggest private-equity fund ever raised).

Instead, Infantino pressed the council to let him close the deal on his own.

European leaders at the meeting balked, and Ceferin and Infantino have not held a meeting since the Colombia summit. In October, European officials threatened to walk out of the last meeting when Infantino suggested he planned to call another vote.

The vote did not take place; instead, FIFA set up a task force involving representatives from the six confederations and asked it to produce an acceptable plan before a scheduled FIFA Council meeting in March in Miami.

At the last summit, in Morocco, Infantino expressed frustration to the officials who declined to take part in the vote for his plans, according to multiple people present at the meeting.

"As part of this discussion, people are asked to give their feedback on a series of proposals and, as in any democratic consultation process, every member can express its opinion freely," FIFA said in a statement. "The feedback received will be fed back to the council together with the results of the other consultation platforms."

FIFA's task force for the two tournaments will hold its next meeting on February 21 in Rio de Janeiro. As tensions grow, however, there is a chance that European executives will not attend, according to a person familiar with the continental leaders' plans.

The proposals to expand the Club World Cup and to create a new global Nations League similar to the recently created UEFA version largely have the backing of officials from South America, Africa and Asia — likely enough to win a vote should Infantino choose to take one at the Miami meeting.

Any such move would exacerbate the growing rift with Europe, however, and potentially lead to a larger crisis if top clubs and leading nations from UEFA refuse to participate in the new FIFA-controlled tournaments.