Israel Folau has labelled his high-profile fallout with Rugby Australia an "opportunity" during a church address on Sunday, saying although he could make his situation "easier" he was encouraged by the chance it provided to resist temptation of "materialistic things".

Folau shared his perspective on the "challenges" of the past few weeks in a speech broadcast live on Facebook on Sunday afternoon by The Truth of Jesus Christ Church Sydney. 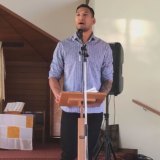 Folau speaks at church on Sunday.Credit:Facebook

"I’ve always been comfortable… Finances [have] always been something I haven’t had to worry about."

Due to Rugby Australia's threat to tear up his contract, however, he said his comfortable financial situation was compromised for the "first time" in his life.

A three-person independent panel is yet to hand down its punishment after finding Folau guilty of a high-level code of conduct breach, but there is a chance he will lose his four-year, $4 million contract.

"Potentially I could get terminated, which means there’s no more playing contract and therefore no more finances or money coming in," Folau said.

"It’s been really challenging, but also it’s been encouraging to myself to see what God is actually doing in my life.

"There’s been many opportunities to potentially make the situation a little bit easier, in the sense that I could probably go back and be able to play the game and get everything back the way it used to be.

"Don’t get me wrong… I enjoy playing the game of rugby and I enjoy all these things that come. It crossed my mind that my life can possibly go back to the way it used to be."

But Folau said he was encouraged by Bible passages that teach "the will of God must come first… no matter how much you want things".

"Satan tries to offer you certain things, and it looks good to the eye, and feels good to the flesh, but in the end it leads to something that is not so good," he said.

"The most important thing to me is keeping God first."

Folau posted a photo on social media last month that said homosexuals, among other groups such as drunks and atheists, were destined for hell unless they repented.