PARIS — Raffaella Reggi rose to 13th in the world in women’s tennis in the late 1980s despite a serve so balky she once recorded 28 double faults in a match in Rome. With the shrill voices of fans pleading with her to use an underhand motion still ringing in her ears, Reggi said she walked into the press room afterward and professed, “I have no idea how to serve.”

Watching a player repeatedly start points by hitting balls into the net or, in the German Alexander Zverev’s case, beyond the baseline, can be excruciating.

“I had some flashbacks,” Reggi said of Zverev’s double-fault-filled performance in his United States Open final defeat to Dominic Thiem.

It’s akin to actors forgetting their lines during a soliloquy. You sit there, helpless to assist, willing them to get back in the flow. If all the court’s a stage, double faults are a tennis player’s inner heckler lashing out.

How the anxiety seeps into the technical execution varies. It can be a wandering ball toss that throws off one’s rhythm or a tightening of the limbs that makes it harder to bend the knees and execute the natural arm swing. The challenge for those struggling with their serves, Carillo said, is to fight the instinct to bend the ball into the box slowly and carefully and instead accelerate their racket head speed.

“More action at the point of contact gives more margin, not less,” she said.

The serve is the only stroke in the sport where the player exercises complete control of the moment. It is a stand-alone action, so when the moment goes awry, there is stand-alone accountability. The 23-time major singles champion Serena Williams, who has one of the most potent serves in the game, said that on those rare occasions when her best weapon is misfiring, “My brain is like: ‘Oh, my God! I never miss this!’”

The embarrassment of being a professional unable to execute this elemental shot faithfully can be acute.

“I mean, in practice I make the serves,” said an exasperated Coco Gauff, who opened the French Open stalking the baseline between service points yelling, “Focus!” as she piled up 12 double faults in a victory against Johanna Konta.

In the next round, Gauff had 19 in a three-set loss to Martina Trevisan of Italy. The 16-year-old Gauff has averaged almost 15 doubles in her last four matches.

“It’s just confidence, just a mind thing,” said Gauff, who added: “I don’t really think it’s a technical thing. I mean, we talk to a lot of people. Sometimes I mess up and hit a bad toss. I mean, when I’m out there on the court, I know I double-fault a lot, but I try not to think of it.” 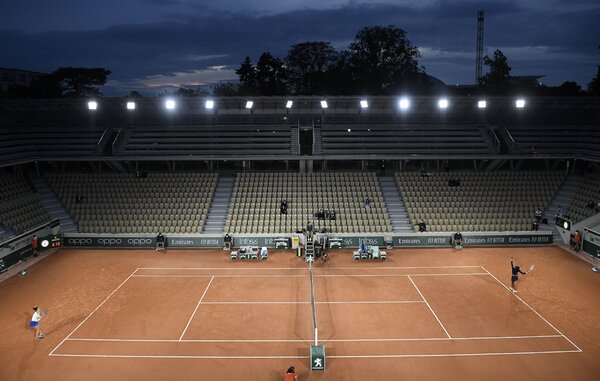 On Wednesday, Sara Errani of Italy committed 14 double faults and threw in a few underhand serves in a 7-6 (5), 3-6, 9-7 loss to Kiki Bertens of the Netherlands.

Afterward, she was asked: “What is the reason for your toss? It went wrong about 60 times. How come?”

“Yeah, I have many problems with that in two years,” Errani said evenly. “Happens to me.”

The previous day, Karolina Pliskova, the No. 2 seed from the Czech Republic, needed three sets to dispatch the qualifier Mayar Sherif. She also struggled with her ball toss, contributing to eight double faults. When asked about it in her virtual news conference, she nearly froze the screen with her stare.

“Next question,” she said. On Thursday, she lost in straight sets to Jelena Ostapenko.

Pliskova’s short reply was revealing. Sian Beilock, a cognitive scientist and, since 2017, the president of Barnard College, said psychology research has shown that when experts reflect on, or try to dissect, their performance, it can disrupt what should be more of an automated, effortless process.

“I imagine that there is some tendency for high-level players to feel it’s better not to overanalyze their step-by-step movement,” she wrote in an email. “It could prompt them to think too much about what they are doing and screw up.”

In his first two matches at Roland Garros, the seventh-ranked Zverev, an 11-time ATP Tour winner, had 13 double faults, which is two fewer than he recorded in his five-set loss to Thiem in New York.

What did he do between the end of the U.S. Open and the start of the French Open to fix his second serve?

Not everybody would agree. Patrick Mouratoglou, a coach who works with Williams and Gauff, among others, said of Zverev’s second serve: “He can’t count on it. It’s letting him down quite often under pressure.”

Zverev is 6-foot-6, with a first serve that is faster than a high-speed commuter train. He recorded a 142 miles-per-hour serve at Wimbledon last year — but also a second serve on a championship point against Thiem this month that was half as fast.

“There is something unclear in his mind and his technique about his second serve that makes it very inconsistent and scary,” Mouratoglou said.

John Isner, another big man with a big serve, said, “Any time you have the yips in any sport, it’s mental.”

Beilock, of Barnard, suggested that it might be helpful for struggling servers to adopt a mantra, a one-word key to help them focus on the process. “Anything to take their mind off of the importance of that serve and the very nitty, gritty details of what they are actually doing with their body,” she said.

Expounding on what he was doing between the end of the U.S. Open and the start of the French Open, Zverev said: “I was on a boat in Monaco doing nothing at all. Then I came here. Then I practiced. Now I’m going to play hopefully seven matches here, and then we’ll see.”