The French Open is the Grand Slam tournament that Serena Williams has played in and won the least, but it has been anything but a footnote in her long and layered career.

The gritty red clay blunts some of her power and limits her ability to change direction in a flash, but she has managed to rise above in Paris after traversing some deep valleys, including her only first-round defeat in a major singles tournament.

In that sense, her up-and-down experience at Roland Garros is a microcosm of her broader tennis journey. Williams is many things — driven, droll, maternal, territorial and outrageously talented — but she is above all resilient.

Paris, a city she enjoys enough to have made it a part-time home, proves the point, perhaps better than anywhere.

In 2020, she is still a contender but no longer the automatic favorite at age 39 and with a daunting draw.

“To me resilience is the ultimate measure of an athlete’s heart,” said Mary Carillo, the NBC analyst and former French Open doubles champion who has followed Williams’s career from the start. “I think my appreciation for her just continues to grow. Maybe it’s because I know she is so much closer to goodbye than hello.”

Williams proved as much in New York earlier this month, battling through three-setters despite being far from peak form before losing to Victoria Azarenka in a rousing semifinal.

Now, Williams has returned to Paris after a two-week break and training at her coach Patrick Mouratoglou’s academy in southern France near Nice. Instead of staying in her apartment on the Left Bank near the Eiffel Tower, she is staying in one of the tournament’s official hotels nearby: a requirement for all players at this pandemic-challenged French Open.

“It’s very different and weird,” she said. “This has always been my home away from home.” 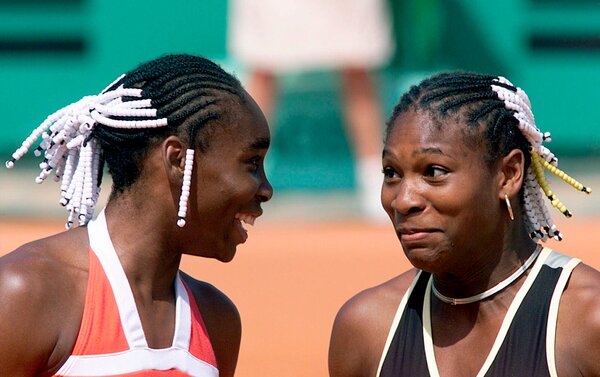 Though most future champions come to a Grand Slam tournament for the first time as juniors, Williams, like her older sister Venus, played little junior tennis. Instead, she started in the main draw in Paris in 1998, reaching the fourth round in singles before losing to Arantxa Sánchez Vicario, who went on to win the title.

The following year, Serena and Venus joined forces to win their first Grand Slam doubles title together, defeating another pair of high-profile teenagers, Martina Hingis and Anna Kournikova, 6-3, 6-7 (2), 8-6, in the 1999 final.

There was no knowing it yet, but that was as close as the sisters would come to losing a Grand Slam doubles final together. They are 14-0 and have often been at their happiest and least conflicted in those moments, but Paris soon made them opponents again.

In 2002, the French Open was the scene of their first Grand Slam singles final. Win or lose, Venus was guaranteed to return to No. 1. But Serena, who had beaten her to the family’s first major singles title at the 1999 U.S. Open, defeated her in Paris, 7-5, 6-3, after having eliminated the reigning No. 1 Jennifer Capriati in the semifinals.

The final was understandably edgy and disorienting. One French fan summed up the crowd’s conflicted emotions by shouting “Allez Serenus!” It was also staccato tennis, with the majority of the points ending in unforced errors.

If defeat stung, Venus gamely masked the pain, joining the photographers during the awards ceremony and snapping shots of her sister. Over the next year, she would get plenty of opportunities to be gracious as Serena defeated her in the finals of Wimbledon, the U.S. Open and the Australian Open to complete the so-called Serena Slam.

Serena did not use that label herself. She called it the So-and-So Slam because it came after a bad breakup with a boyfriend she declined to name publicly.

“I wanted So-and-So to regret how he treated me,” she wrote in “On the Line,” her 2009 autobiography. “I wanted him to see me everywhere, doing well.”

But her 33-match winning streak at the majors — one of the greatest in the game’s long history — would come to an end in 2003 at Roland Garros when she faced Justine Henin in the semifinals.

Henin, an unimposing Belgian with a sweeping one-handed backhand, was quite a stylistic contrast with Williams and was at her best on clay, eventually winning three French Opens.

She had beaten Williams on the surface in Charleston, S.C., earlier in 2003, but beating her in Paris came with controversy. Williams, leading by 4-2 and 30-0 in the third and final set, hit a first serve while Henin had her left hand raised as if to indicate that she was not ready to return. The serve missed and despite Williams’s protests, she was not allowed another first serve. The chair umpire, Jorge Dias, had not seen Henin’s gesture, and Henin did not acknowledge that she had made it.

At that time, in light of her dominance, no one could have predicted that she would need 10 more years to win another singles title at the French Open.

There would be a family tragedy, the murder of her older sister Yetunde later in 2003. There would be significant injuries, and though she would win the other major tournaments multiple times, she continued to falter at Roland Garros.

In 2012, she struck bottom, making errors by the dozen in a first-round defeat to the 111th-ranked Virginie Razzano. It was a brutal, demoralizing setback, but it also turned her career around.

In her disarray, she decided to change her patterns and reached out to Mouratoglou to see if she could train at his academy, then on the outskirts of Paris. She invited him to give her perspective on her game, a rarity for a player who had usually relied on her parents for coaching.

Mouratoglou told her that though she was already one of the greatest players in tennis history, he believed she was an underachiever with her talent and competitive fire.

She took note and then won Wimbledon a few weeks later and played perhaps her finest tennis in winning the gold medal at the London Olympics, also held on grass at the All England Club.

“That to me was her greatest tour de force,” Carillo said.”

Her progress paid off on all surfaces but most dramatically on clay with her new emphasis on point construction and creating more spin and margin for error. She won the French Open in 2013, dropping just one set in the tournament a year after losing to Razzano.

After losing in the second round in 2014 to Garbiñe Muguruza, a Spaniard then just beginning to rise, Williams returned in 2015 and bounced back again with one of her grittiest performances. She won her third French Open despite contracting the flu and topped it off by giving part of her victory speech in French after defeating Lucie Safarova in the final.

“You’ve got to dig deep and get yourself dirty and not be afraid to go for the win,” said Rob Steckley, Safarova’s coach. “That’s what Serena does best.”

As she coughed and blew her nose on the changeovers while playing through fever, it was a triumph that, more than any other in Williams’s career, felt like an act of will — a fight against herself more than a tussle with an opponent.

Williams has yet to win again at Roland Garros, but that fight continues. It has brought her back to the game in her late 30s after childbirth in 2017. It has brought her back to Paris and a hotel room in a place where she usually has much cozier options; to the autumnal gloom and few fans and heavy balls that do not favor her game; to a field full of new arrivals and familiar rivals eager to take a swing at their era’s most prolific Grand Slam champion.

“I think Serena feels she still has more to say,” Carillo said. “I honestly had a hard time watching Day 1 of Roland Garros with Andy Murray struggling and Venus losing again. I always draw the distinction between a comeback and coming all the way back. I can’t imagine Venus and Murray are still thinking, yeah, I can win a major, and I can get to the top again. But Serena knows that’s true. She hasn’t been able to prove it yet, but she knows in that great, beating heart of hers.”

Pull it off, and she’ll have her best Paris story yet.