France beat holders US 89-79 in the quarterfinals, snapping their 58-match winning streak at FIBA and Olympic contests. 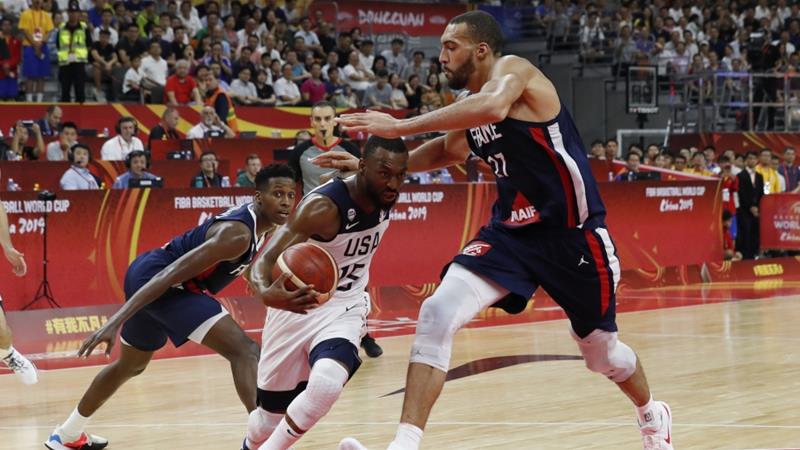 France have caused the biggest upset of the men’s Basketball World Cup defeating the defending champions United States 89-79 to reach the semi-finals of the 32-nation tournament in China.

With the quarter-final loss on Wednesday, the top-ranked US will fail to capture gold at a major international tournament for the first time since the 2006 world championships.

Third-ranked France carved out a 51-41 lead early in the third quarter at the Dongguan Basketball Center, but the Americans, who were last eliminated from the medal rounds in the 2002 tournament on home soil in Indianapolis, appeared to have turned the tide when they surged ahead 72-65.

The French forced the final twist in the closing stages, thanks to effervescent performances by Utah Jazz centre Rudy Gobert, who finished with 21 points and 16 rebounds, and Orlando Magic guard Evan Fournier who netted 22 points.

France will now meet Argentina on Friday for a berth in Sunday’s final, while 2006 champions Spain take on Australia who beat the Czech Republic 82-70 in the quarter-finals on Wednesday.

“We came here to win gold,” said Gobert. “We knew it wasn’t going to be easy. A lot of people counted us out, but we got the win.”

Gobert said beating the Americans was not the goal, winning gold is. “It doesn’t mean anything if you don’t win in the end,” he said.

The US had won 58 consecutive tournament games in FIBA and Olympic competitions, starting with the bronze-medal game at the 2006 world championships and continuing through every FIBA Americas, World Cup and Olympics event since.

The US were bidding to become the first nation to win three consecutive World Cups, after winning three straight Olympic golds in that span.

“Any loss hurts and in this situation, it hurts more, but life goes on,” said US coach Gregg Popovich. “This is very important and we would’ve loved to have won just like any other team.”

The US, having secured a berth in the 2020 Tokyo Olympics, will next face Serbia in a consolation round on Thursday.