Liverpool moved eight points clear at the top of the Premier League by beating title rivals Manchester City on Sunday.

The win also means they are nine points ahead of defending champions City, who are fourth in the table.

Leicester moved up to second with an impressive 2-0 win against Arsenal and Watford moved off the bottom of the table by beating Norwich 2-0.

Here’s my team of the week – have a read and select your own below. 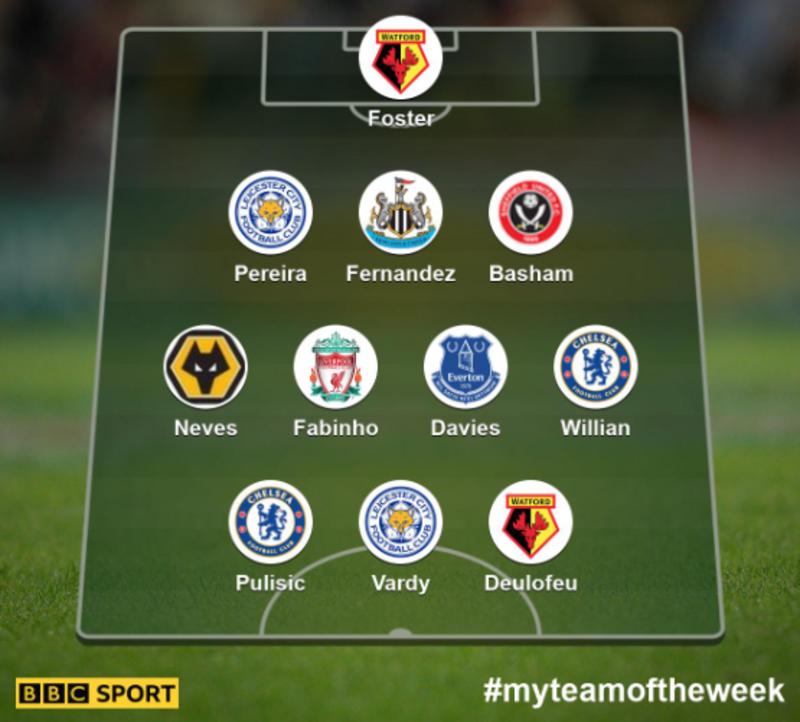 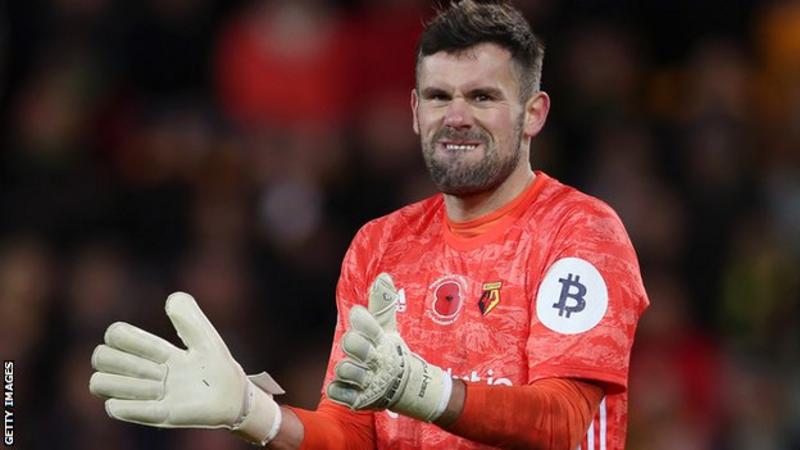 Foster: Watford’s start to the season has been immensely difficult but there has been no-one more committed to getting the Hornets up the league than Ben Foster.

The former Manchester United and West Bromwich keeper has been magnificent and, although Watford have struggled, Foster has featured in my team of the week on a number of occasions such have been his performances.

Once again the former England international was brilliant away at Norwich, kept a clean sheet and was pivotal in a very important victory.

Did you know? Foster has kept three clean sheets in his last five Premier League appearances – as many as in his previous 27 games in the competition. 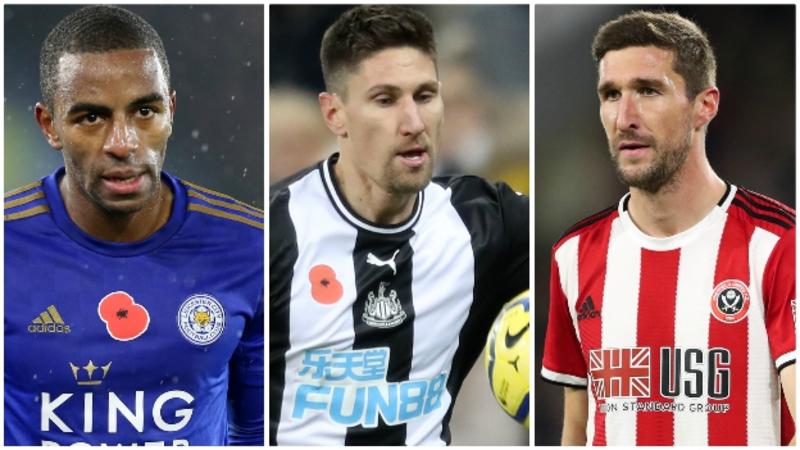 Pereira: Eight wins in 10 league games and the best defensive record in the Premier League says it all.

Exactly how much of that is down to Ricardo Pereira is difficult to quantify. What I can say is the Portugal international was outstanding against an Arsenal team who looked in total disarray.

The Gunners have some very talented players so why are they looking like a team of nervous school children terrified of their headmaster?

Did you know? Pereira completed 21 passes that ended in the final third, more than any other player in the Leicester vs Arsenal game.

Fernandez: Ciaran Clark and DeAndre Yedlin may have been the defenders who scored Newcastle’s goals but in was Fernandez who won them the points.

It was the Argentine who was prepared to put his head in the fray to stop Joshua King from nodding home an equaliser. It was just enough for King to think about a clash of heads or a broken nose but it was enough.

In the great scheme of things no-one can tell what this result will mean in the final analysis for either team but I sense that Newcastle will need these points more than Bournemouth.

Did you know? Fernandez had more touches (62) than any other Newcastle player against Bournemouth and his 35 passes was a joint team high.

Basham: Sheffield United’s ability to defend may be the prime reason they remain in the Premier League and Chris Basham is proving to be a vital member of that defensive unit.

He didn’t get Sheffield United’s goal against Spurs, who still haven’t recovered from their European final defeat, but did as much as anyone to enable the ball to cross the line from the George Baldock’s cross.

Ironically, if Basham had got a touch VAR would have almost certainly ruled it offside. Last week I called VAR a joke. It’s decision to rule out David McGoldrick’s finish was nothing short of pathetic.

Did you know? Basham won possession of the ball in the final third on two occasions – more than any other Sheffield United player against Tottenham. 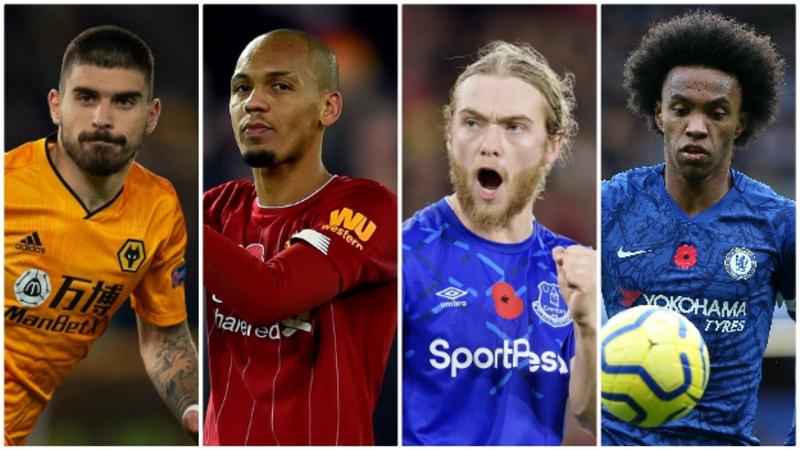 Neves: Wolves won in Europe in midweek having missed a penalty. Ruben Neves missed the spot kick but more than made up for it by scoring a superb goal in a very impressive victory over their arch rival Aston Villa three days later.

I’ve said before that the Europa League is a competition too far for Wolves – they played at home this week but had they had to travel to Bratislava it might have proved my point.

Nevertheless, they seem to be coping with the schedule for now.

Did you know? Neves has now scored 14 goals for Wolves in all competitions, with 11 of those coming from outside the box.

Fabinho: Liverpool’s performance against Manchester City was about as professional as you will ever see from a Premier League team.

Manchester City played the football and Liverpool got the job done. They were absolutely ruthless.

This was not a game for the stars either but one for the unsung heroes. The men who do all the running, never complain and seldom get the headlines. The Hendersons, Wijnaldums and my man of the match Fabinho.

Was it a handball by Trent Alexander-Arnold – you bet your sweet life it was – but that was the break Liverpool needed and boy did they take advantage of it.

Did you know? Fabinho netted his second Premier League goal for Liverpool in what was his 39th appearance in the competition – his goal after 5mins 26secs was the fastest Man City have conceded in the Premier League since December 2016 against Arsenal (4mins 6secs – Theo Walcott).

Davies: In the absence of Andre Gomes, the abilities of Tom Davies in midfield have become even more important to Everton. What a relief it must have been then for the beleaguered Marco Silva, who for some reason is still under pressure at Goodison Park, that Davies was quite outstanding away at Southampton.

The Saints on the other hand have a manager who looks lost in space and in desperate need of reinforcements.

Did you know? Davies made three interceptions against Southampton – no Everton player made more.

Willian: What a clever move by Frank Lampard to make Willian captain. The Brazilian is now an elder statesman at Stamford Bridge and the perfect candidate to bring the Chelsea youngsters through.

He is also has the best player in the team and can command the respect of some very talented but inexperienced young players. The flick on the edge of the Crystal Palace box to open up the space for Tammy Abraham to score was just wonderful. He’s not a screamer either. Thank goodness the game has dispensed with the screamers.

Did you know? Willian created four chances against Crystal Palace (including one assist) – more than any other Chelsea player. 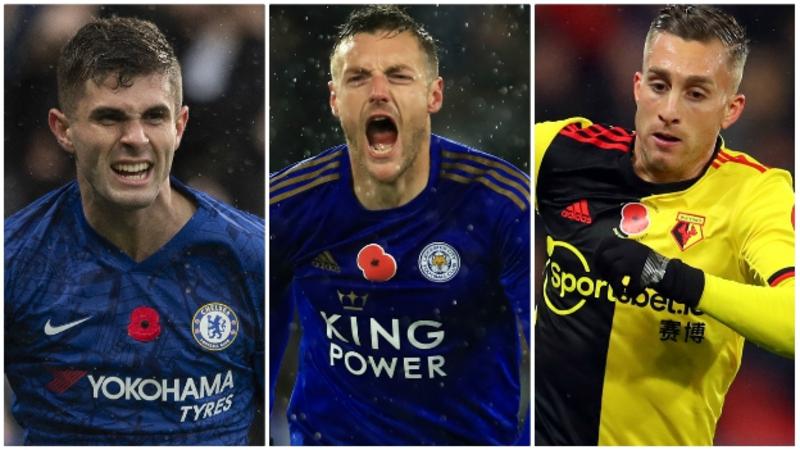 Pulisic: Joel Ward should be given time off to get over the run around Christian Pulisic gave him at Stamford Bridge in the London derby.

Within the opening exchanges the American danced round the full-back only to be saved by Crystal Palace goalkeeper Vicente Guaita. Pulisic then stepped over the ball so emphatically Ward nearly had to pay to get back in the ground.

Pulisic not only loves taking players on but scoring goals and he’s good at it. He’s not afraid to get in where it hurts either which is always a very good indicator.

Did you know? Pulisic has been directly involved in 10 goals (five goals and five assists) for Chelsea across all competitions this season (14 appearances) – only Tammy Abraham (14) has been involved in more for the Blues.

Vardy: Twenty goals in 22 games for Leicester since the arrival of Brendan Rodgers tells me that the former Liverpool and Celtic manager is doing with Jamie Vardy – precisely what Unai Emery is not doing at Arsenal. Everybody at Leicester looks like they love playing for Rodgers and no-one more so than Vardy.

Meanwhile Emery, who looks like he’s eaten a lemon before his post-match interviews, always appears to be at odds with his players. A manager who is constantly at war with his players is doomed. As for Vardy, he’s having one of those parties again.

Did you know? Vardy is the Premier League’s top scorer, netting 11 of his 25 shots on goal at a conversion rate of 44% – the highest percentage of any player to have scored at least three goals in the competition this season.

Deulofeu: I think Watford are very lucky to have Quique Sanchez Flores at the helm considering the way he was unceremoniously sacked during his first spell at the club.

The Hornets have been threatening to win away from home under Flores and did it quite comprehensively against Norwich. The reason was Gerard Deulofeu. When the Spaniard is in this mood he’s almost unplayable. Deulofeu should be playing for Arsenal and Quique Flores managing them.

Did you know? Deulofeu has scored in back-to-back Premier League games for Watford for the first time since December 2018 – having failed to score with his first 25 attempts in the Premier League this season, he has scored two of his last four shots in the competition.

You’ve seen my selections this season. But who would you go for?

Crooks of the Matter

A few weeks ago Crooks of the Matter grabbed the headlines when it argued that football was on the verge of a ‘Cantona’ moment.

The statement wasn’t meant to be alarmist but to make the point that since the French international Kung Fu kicked a Crystal Palace fan at Selhurst Park in 1996 due to the Manchester United player being abused, the situation of fans racially abusing players in football has got worse.

Recent statements from England manager Gareth Southgate insisting that racism is a societal problem is an undeniable fact; but which individual with a shred of common decency would tolerate such behaviour in their home or employer in the workplace?

Incidents, in Montenegro, Bulgaria and again in Italy, have forced professional black players to act. What’s more they have been emboldened to do so by their peers in order to deal with matters when officials turn a blind eye.

Mario Balotelli’s recent outburst where he kicked the ball into a crowd of Verona supporting ultras, who racially abused him, is precisely the warning Crooks of the Matter was making. Balotelli has been accused of ‘arrogance’ but it doesn’t seem to have adversely affected Cristiano Ronaldo’s career.

If football authorities continue to tiptoe around this matter by issuing petty fines and excuses to accommodate clubs, not only will huge embarrassment soon follow but they risk losing the cooperation of professional black players entirely.