At the midpoint of the Giants’ 2020 season, they had lost seven of their eight games, with four of those defeats by four or fewer points.

Asked to characterize his team, Giants Coach Joe Judge had answered: “I see a lot of improvement.”

As a rookie head coach in the N.F.L., Judge is given a little slack for maintaining his optimism in a dreary situation. But Judge is nothing if not a no-nonsense guy. He was tutored for nearly a decade by the Patriots’ Bill Belichick and Alabama’s Nick Saban, who are royalty in the blunt-speaking category.

Sunday, after the Giants' 17-12 road victory over the Seattle Seahawks, one of the biggest upsets of the N.F.L. season and the fourth consecutive victory for the first-place Giants, Judge’s message had changed in only one minor way. He still talked about the ongoing improvement he sees, then he added: “I’m glad to see some tangible results for all the hard work.”

Oh, and the Giants (5-7) handed the Seahawks (8-4) their first home loss this year behind a backup quarterback, Colt McCoy, who had not won as a starter in six years.

Most surprising, the Giants did not claim their most meaningful victory in several years with skulduggery or a novel game plan that knocked Seattle off its usual, efficient rhythm. The Giants pushed the Seahawks around on both sides of the line of scrimmage and focused on a conservative, run-first approach, especially in the second half when they scored all their points.

Along the way, the Giants rushed for 190 yards and sacked Russell Wilson, Seattle’s elusive quarterback, five times. McCoy had only 105 yards passing with one interception after a deflection, but as the Giants were building and then protecting their second-half lead late in the game, McCoy completed a series of pivotal third-down passes to extend drives.

Or, in the (few) words of Judge: “Colt really stepped up.”

To keep things in perspective, the Giants are only in contention for a postseason berth because they play in the dreadful N.F.C. East, where a losing record that is only two games under .500 is good enough to make them the division’s headliner, a game ahead of a Washington team that will face undefeated Pittsburgh on Monday. But, consider this bit of progress — or improvement, as Judge would say: Sunday the Giants became the first N.F.C. East team this season to beat a team with a winning record.

“They were really tough and gave us a hard time all day long,” Seattle Coach Pete Carroll said. “We didn’t move the ball well — it’s kind of an uncharacteristic feeling.” 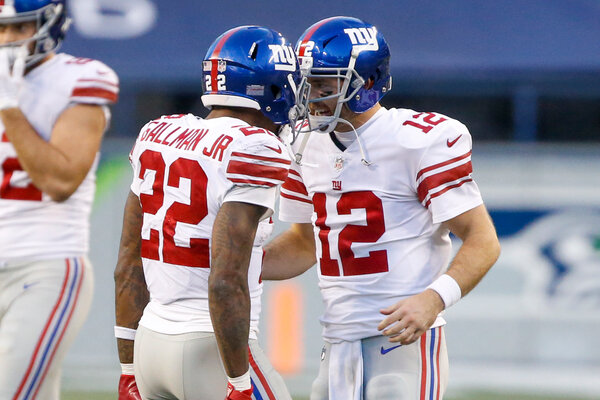 Most prominent in the Giants’ defensive effort was the team’s pass rush, which hounded Wilson throughout the game. Beyond the sacks, Wilson, who completed 27 of 43 passes for 263 yards with one touchdown and an interception, was forced to hurry multiple throws and was frequently on the run as he passed.

The Giants’ Leonard Williams, the former Jets defensive lineman, had two and one-half sacks Sunday, which gives him a career-high eight and one-half sacks for the season. When the Giants used their franchise tag to sign Williams in the spring, Giants General Manager Dave Gettleman took some criticism for the transaction. Williams has been a highly disruptive force for opposing quarterbacks in nearly every game this year. Or, as Judge said Sunday evening: “The dude is a man.”

Another rising Giants star, running back Wayne Gallman, had a stellar game, rushing for 135 yards on only 16 carries. Replacing the injured Saquon Barkley, Gallman has given the Giants’ offense stability and taken a lot of the pressure off of quarterbacks Daniel Jones, who missed the game with a hamstring injury, and McCoy.

Although Gallman had rushed for 94 yards in the Giants’ previous game against Cincinnati, Carroll seemed a bit startled by his performance Sunday.

“They ran some basic stuff and got away from us,” Carroll said of the second half when Gallman had 129 of his rushing yards.

Trailing Seattle 5-0 at the half, a 60-yard dash by Gallman on the Giants' second possession of the third quarter set up a 4-yard touchdown run by Alfred Morris. A successful 2-point conversion attempt gave the Giants an 8-5 lead.

A Gallman run for 23 yards on the Giants’ next drive led to another Morris rushing touchdown and a 14-5 lead after Giants place-kicker Graham Gano missed the extra point attempt. Gano added a field goal in the fourth quarter to put the Giants ahead, 17-5, but Wilson led the Seahawks on an 11-play drive that culminated with a 28-yard touchdown pass to Chris Carson with a little more than six minutes remaining in the game.

Gallman and McCoy teamed up to run down an ample amount of clock on their next possession before punting the football back to Seattle with 108 seconds left in the fourth quarter. But the stout defensive effort continued and the Seahawks never advanced closer than the Giants’ 46-yard line.

Noting that there were more winning teams — in the form of Cleveland (9-3) and Baltimore (6-5) — on the remaining schedule, Judge did not appear overly enthusiastic about the Giants’ upset victory. He still seemed to have improvement on his mind.

“I love the fact that we’re a young team,” he said.