The quirky Perth tournament is entering the final year of an original three-year deal, with no guarantees it will survive beyond this year.

The $1.6 million tournament features three rounds of normal stroke play, before the top 24 players battle it out in a series of six-hole elimination shootouts on the final day.

Players who have taken the field in previous events support the format in an acknowledgement golf needs to experiment and be innovative.

But tournament organisers have struggled to attract the world's best talent to Lake Karrinyup Golf Course, with this year's field particularly lacking.

World No.55 Tom Lewis and world No.79 Thomas Pieters are two of the tournament's biggest names this year, with Herbert, Geoff Ogilvy, Jason Scrivener, and Andrew Johnston among other drawcards.

Herbert believes the potential for the Perth tournament is big and he would like to see it continue. 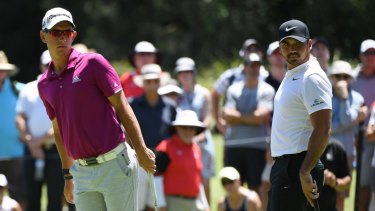 "I would love this tournament to go ahead for the next 10 years," Herbert said of the event, which is tri-sanctioned by the European and Asian tours and Tour of Australasia.

"The crowds will be out, definitely last year playing against Kiradech (Aphibarnrat) we had really good followings.

"And it's a great way to showcase Perth as well. All the players and all the spectators have an amazing time here.

"This is such a great tournament. We look forward to it every year, so fingers crossed it gets signed again and we're playing here more and more."

Herbert said luring the world's best players was the No.1 challenge for tournament organisers.

"Nowadays the top 50 in the world are pretty hard to get out to any events," Herbert said.

"With Mexico being next week, it's tough for those guys (to come to Perth).

"I don't think you could get further away from Mexico than Perth, so as far as travelling schedule goes, not many want to come here, and we don't have the budget to pay them the money they're going to be asking."

Herbert finished third at last year's World Super 6 Perth and the world no.76 hopes he can win it this time around.