HALEIWA, Hawaii — John John Florence, maybe the best surfer of his generation, can see the world’s most famous surf break, the Banzai Pipeline on Oahu’s North Shore, from the beachfront deck of his house. He just has to turn his head slightly to the right.

“Oh, look at that wave!” he shouted recently, interrupting something he was saying about the reconstructed right knee that has kept him out of competition since June.

Florence, 27, has stared at and surfed this stretch of Sunset Beach all of his life. The house where he grew up is directly in front of Pipeline. His mother still lives over there, and Kelly Slater, the 47-year-old, 11-time world champion — a mentor, friend and rival to Florence — lives next door to her. Florence can walk there in just a couple of minutes. 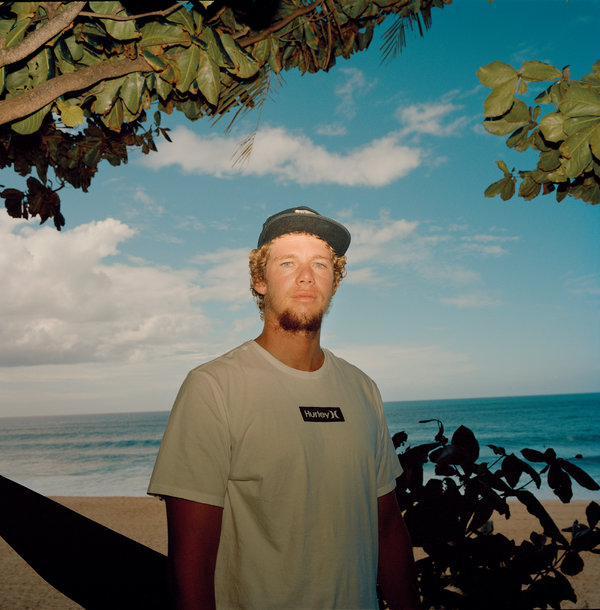 Growing up looking at Pipeline, then surfing it, Florence’s favorite pro surfer was Slater, a seven-time champion of the Pipe Masters event. He used to watch Slater surf that break in the winter. He wanted to be Slater. Then Slater moved in. His hero became a neighbor. It took Florence years on tour to get used to competing against him.

Looking at the view that he and Slater share, Florence pondered the unique closeness, the proximity, of their parallel lives. To Florence, Slater is a mentor, friend and rival, yes. But none of those words felt precise enough.

“We had this cat at my mom’s house that kind of lived between the houses,” Florence said, choosing a story from a couple of years ago to illustrate their relationship. “And one day he called me and said — the cat’s name was Kitty — he said: ‘Kitty’s dead. I found Kitty under the house.’ He came over and helped us bury him, and he said a few words for the cat.”

Florence laughed. The waves were picking up.

And so, both men admit, it feels poetically appropriate that, as surfing prepares for its Olympic debut in Tokyo next summer, Florence and Slater will vie for the one remaining spot on the American team — a spot to be decided this month at the Pipe Masters, at Banzai Pipeline, on waves barreling toward their houses.

Florence expects to compete, for the first time since June. He feels the need to get back in the water, in large part to fend off Slater and secure a spot at the Olympics.

“Kelly won his first world title the year I was born,” Florence said, referring to 1992. He paused to let that nugget sink in. “That’s crazy to think about. I think about it every time I go out there with him. How in the heck is he still going?”

A day later, down the beach at Haleiwa, Slater was between heats of a competition called the Hawaiian Pro, a warm-up for Pipeline. Over several days, every time he appeared on the beach, the crowd lazing in the sand perked up. Fingers and phones were pointed his way. Sun-bleached kids fluttered around him like butterflies.

He stepped into a quiet area of shade and pondered the expected showdown with Florence and the enticement of the Olympics.

“It would be icing on the cake,” Slater said. “Surfing in the Olympics, that would mark 40 years of competing for me, next year. It would be my 40th year since I surfed my first contest, when I was 8 years old. To potentially surf at the Olympics when I’m 48, it would be a nice sort of bookend for me.”

The field for the first Olympic surfing championship is limited to 20 men and 20 women. Half of the men’s spots (and eight for the women) will be determined by this year’s rankings in the World Surf League; the Pipe Masters is the final men’s event. The others will be allocated through non-W.S.L. events next spring.

But no more than two men and two women from each country can qualify. That means one of the three Brazilians who are in the top four of the world standings will be left out. It also meant that the top three women on tour — the Americans Carissa Moore, Lakey Peterson and Caroline Marks — competed for both the world title and the two U.S. Olympic spots at the season-ending Maui Pro this week. (Moore won her fourth world title, and Marks earned the other Tokyo ticket.)

Among the American men, the Californian Kolohe Andino has clinched an Olympics spot with his stellar season on the W.S.L. tour, where he is fifth. Florence, the 2016 and 2017 world champion, had such a spectacular spring that he is eighth on tour despite missing half of this season’s events. He is the second-ranked American. Slater is 10th over all, but he has been unable to pass Florence despite his friend’s absence all summer and fall. His best showing this season was a third-place finish in Bali in May. Slater has not made the quarterfinals of an event since.

The math is complicated, but Slater needs to advance a few rounds further than Florence at Pipe Masters to make the Olympic field. There is even a small chance that neither of them will go; another Hawaiian, Seth Moniz, is 12th on tour.

“Kelly and Seth are two people you don’t want to leave it up to at Pipe,” Florence said. “Especially Kelly, who’s so damn competitive. That’s really pushing me to want to be in it, to be part of that event, and do my best to keep them out of it.”

The window for Pipe Masters is Dec. 8 to 20. When the surf is deemed sufficient, Florence and Slater will emerge from their homes, walk across Sunset Beach and determine who goes to Tokyo.

“Maybe we meet up sort of early in the heats and I have to beat him, and then I have to win a bunch of heats to get past him,” Slater said. “Or he could end it right there for me if he just beats me. It would be nice if it’s in one of our hands.”

Florence’s ability to compete at Pipeline remains the week’s most talked-about variable. Sitting in a chair on his deck, he admitted that his recovery from anterior cruciate ligament reconstruction had been slowed by the 30 days in August and September he spent sailing his catamaran to and from Palmyra Atoll and Fanning Island, more than 1,000 miles south of Hawaii, with four others.

“I probably would be farther ahead if I had stayed at home and trained every day, for sure, but that’s just not really who I am,” he said. His blond ringlets sneaked out from the bottom of his cap, and a pale scar was visible in the sun tan of his right leg. His blue eyes are paler than a shallow sea. “It was an awesome trip — a life experience,” he said. “So happy that we did it.”

Florence was the two-time defending world champion when he injured the knee midway through 2018. He missed the second half of the season resting it, opting against surgery, and then charged through the first half of 2019, winning two of his first four events.

But in the quarterfinals of the Oi Rio Pro in Brazil in late June, he limped out of the water with a ruptured A.C.L. It was rebuilt using ligaments from his hamstring. Most reports at the time speculated that Florence’s shot at the Olympics was gone, but he looked at how the standings had played out in 2018 and figured he would still be in the mix come December.

He sounded confident in late November. He had been surfing a little on his own, but had opted out of two events on the North Shore to focus on the third: Pipe Masters, which will decide everything.

“If I’m feeling like, ‘Oh, I can’t wait to go out there, this is going to be awesome,’ then for sure I’m going to do it,” Florence said of competing. “But if I show up and feel super uneasy about it, just not feeling it — surfing Pipe in general, fully healthy, you have to be confident in what you’re doing.”

Florence has not won a Pipe Masters title — an aggravation, considering he grew up closer to Pipeline than anyone. In head-to-head heats with Slater, he is 2-6, including 0-3 at Pipe Masters. The last time they surfed face to face here was in the 2013 final.

Slater last won a world title in 2011, Florence’s first year on the championship tour. Slater finished second the next two seasons, but has not finished higher than seventh in the past five years, as surfing’s mantle transitioned to Florence and others, like Brazil’s Gabriel Medina.

“Three years ago we did this really cool trip to the Marshall Islands,” Florence said, a journey highlighted in the movie “Proximity.” “It was kind of right when I was getting into that mind-set of, O.K., I really want to compete, and how can I win? I was just picking his mind and asking him a million questions. He’s very competitive, so who knows if what he told me was true.”

He smiled. He won his first world title that year, then won again in 2017. The takeaway from Slater was about strategy — breaking big competitions into small pieces, building a mind-set to win each heat, one wave at a time.

A couple of miles away the next day, Slater was competing at Haleiwa Ali’i Beach Park. It was the first leg of the Triple Crown, an event mostly filled with second-level pros trying to qualify for next year’s championship tour. Slater, who would reach the semifinals, was using it to get into contest mode for Pipe Masters.

Each time he came out of the water, he was swallowed by photographers and fans who lined up to take selfies with him, some with their children, even their dogs. Slater, his head bald and his smile white, his body chiseled and bronze, stood there for an hour until everyone had their moment with him.

Florence used to be one of those awed boys who swirled around Slater on the beach. Now he is in Slater’s way.

“I think he’ll compete,” Slater said of Florence that day, away from the crowd. “I can’t see John not competing at Pipe if he’s anywhere close.”

Then he headed home, where the yard of the house next door has a cat that Slater helped bury. Another house nearby shares a similar view of Pipeline, and a perspective reaching all the way to Japan.