A blazing unbeaten half-century to Alyssa Healy has helped the Sydney Sixers to a seven-wicket flogging of the Melbourne Renegades at the SCG.

Healy signalled her return to form in the competition as she whacked 70 off just 42 balls, helping the Sixers chase down the Renegades' 8-110 with 35 balls to spare. 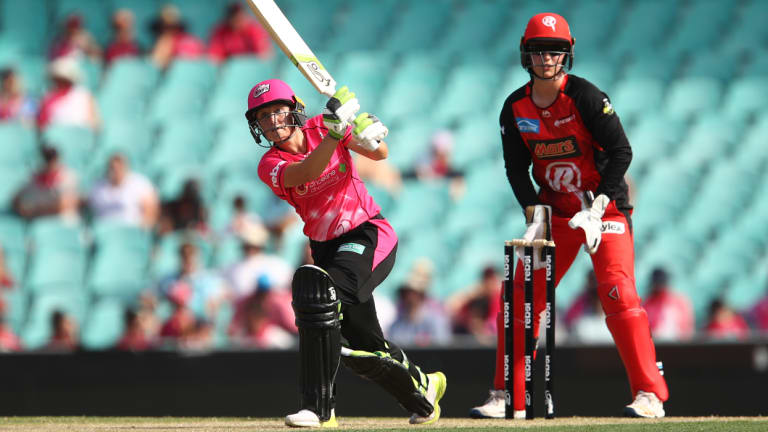 Alyssa Healy bats against the Renegades.Credit:AAP

Australia's best player in their World Twenty20 victory in the Caribbean last month, Healy also hit 70 in the first game of the WBBL but has only reached double figures twice in the six innings since.

She brought up her half-century in just 33 balls on Thursday, and her innings included nine boundaries and two massive sixes swept over the leg side boundary off spinner Molly Strano.

Strano (3-26) had been the only one of the Renegades bowlers to trouble the Sixers, claiming all three of their wickets in the form of Ellyse Perry (8), Ashleigh Gardner (19) and Erin Burns (4).

The win moved the Sixers back into second spot on the WBBL ladder behind leaders Sydney Thunder, while the Renegades are stranded in seventh with just two wins.

Left-arm quick Lauren Cheatle had earlier been the Sixers' best with the ball, claiming figures of 2-6 from her two overs.

Her spell included the key wicket of Amy Satterthwaite for 21, who along with Maitlan Brown (33 off 30) provided the only real resistance for the Renegades.