Herb Adderley, the Hall of Fame cornerback who played for Coach Vince Lombardi’s Green Bay Packer teams that won five N.F.L. championships in the 1960s, including the first two Super Bowls, and then helped take the Dallas Cowboys to their first Super Bowl victory, died on Friday. He was 81.

The Pro Football Hall of Fame in Canton, Ohio, announced his death. No details were provided, but the Packers said he had recently been hospitalized.

When Adderley arrived at the Packers’ 1961 training camp as a first-round draft pick and a former all-Big Ten running back at Michigan State, he expected to be a backup for the Packer stars Jim Taylor at fullback and Paul Hornung at halfback, and that is what he became. Going into the annual Thanksgiving Day game between the Packers and the Detroit Lions, he had not run from scrimmage all season.

But Lombardi, who saw Adderley as the best pure athlete on the team, finally gave him a chance — in the defensive alignment. He inserted Adderley, who had played some defense in college, at left cornerback in the second quarter when the Packers’ secondary, already short-handed, lost cornerback Hank Gremminger to an injury.

“I was in a state of shock,” Adderley told The Milwaukee Journal Sentinel long afterward. “I was shaking and nervous. I had no time to ask anybody any questions. I didn’t know what I was doing.”

Nonetheless, he intercepted a fourth-quarter pass from the Lions’ Jim Ninowski, helping the Packers rally for a 17-9 victory. In December, the Packers won their first N.F.L. championship under Lombardi, routing the Giants, 37-0.

Adderley played for nine seasons with the Packers and three for the Cowboys. He had speed and decent enough size for a cornerback of his time, at 6-foot-1 and 205 pounds, and he intercepted 48 regular-season passes, running seven of them back for touchdowns. He took an interception 60 yards for a score when the Packers defeated the Oakland Raiders in Super Bowl II. 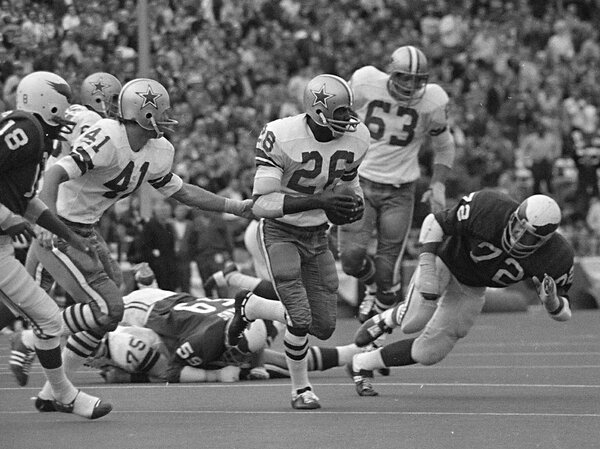 Adderley was selected for the N.F.L.’s all-decade team of the 1960s, playing on a defense that included the future Hall of Famers Willie Wood at safety, Willie Davis at end, Henry Jordan at tackle and Ray Nitschke and Dave Robinson at linebacker. (Wood died in February at 83, and Davis died in April at 85.)

Adderley was an outstanding kickoff returner as well. He ran the ball back 103 yards against the Baltimore Colts and took another kickoff for a 98-yard score against the Los Angeles Rams.

He was among only a few Black players on the Packers when he joined the team. When the Packers faced the Washington Redskins in a 1961 preseason game in Columbus, Ga., where hotels were segregated, the entire team stayed at Fort Benning, an Army base. As Adderley recalled, Lombardi said, “I’d rather be here with all my players than be split up somewhere else.”

Adderley said that landlords would not to rent to the Packers’ Black players when he was a rookie, leaving him to live with Davis and the running back Elijah Pitts in what he called a “shack” on the outskirts of Green Bay, Wis.

Lombardi met with real estate agents after that, Adderley recalled, and “the following year, it was different. We had decent housing. He opened a lot of doors for Black folks and Black families — many that had nothing to do with the Packers.”

Herbert Allen Adderley was born in Philadelphia on June 8, 1939, the son of Charles and Rene Adderley. His father was a factory machinist. Herb was a multisport athlete at Northeast High School.

Playing for three seasons at Michigan State, he gained more than 800 yards rushing and was a pass-catching threat. The Packers selected him as the 12th overall pick in the 1961 N.F.L. draft.

The Packers traded Adderley to the Cowboys in September 1970. He teamed with the future Hall of Famer Mel Renfro at cornerback when Dallas lost to the Baltimore Colts in the Super Bowl after the 1970 season and then defeated the Miami Dolphins in the next Super Bowl. (A member of that Colts team, the wide receiver Jimmy Orr, died on Tuesday.)

Adderley retired after the 1972 season with 1,046 yards in interception returns and 3,080 yards in kickoff returns.

In October 1984 he attended the Packers’ first full-scale reunion for players from the 1966 team, which defeated the Kansas City Chiefs in Super Bowl I. And he made it clear where his loyalties resided.

Telling of that gathering in “Distant Replay” (1985), by the former Packer guard Jerry Kramer and the sportswriter Dick Schaap (the follow-up to their book “Instant Replay”), Adderley said: “As far as I’m concerned, I never played for the Dallas Cowboys. I’m the only guy in the country who has a Dallas Cowboys Super Bowl ring and doesn’t even wear it.”

Adderley’s survivors include his wife, Brenda, the Hall of Fame said.

After his playing days, Adderley owned a Philadelphia-based company that laid television cable lines around the country.

He was the lead plaintiff in a 2007 federal lawsuit against the N.F.L. players’ union filed on behalf of 2,056 retired players who contended that the union had improperly failed to include them in marketing deals. The suit resulted in a $28.1 million judgment against the union; after the verdict was appealed, the retirees settled for a $26.25 million payout.

Robinson, the Packers’ left linebacker of the 1960s, once recalled Adderley’s combativeness, which could extend to confronting an opposing coach.

“Herb didn’t forget anything,” Robinson was quoted as saying on the Packers’ website. “He took everything personal. One time in Baltimore, Don Shula yelled at him from the sideline after a tackle, and Herb told Shula to put on a uniform and he’d hit him the same way.”