John Newcombe says Davis Cup coach Jason Stoltenberg and advisor Tony Roche asked captain Lleyton Hewitt to play doubles for the country because they still regard him as the nation's best option.

Hewitt was due to begin his men’s doubles campaign at the Australian Open alongside Queenslander John-Patrick Smith on Thursday night after a three days of controversy sparked by Bernard Tomic’s brutal assessment that he had “ruined the system”. 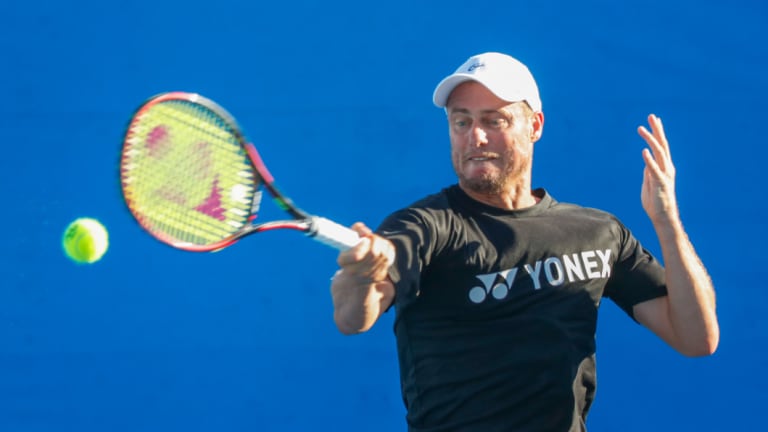 ‘The best doubles player we’ve got’: Lleyton Hewitt will be in action in the men’s doubles on Thursday.Credit:AAP

The damaging saga continued to gather pace with a provocative Nick Kyrgios post on social media on Wednesday night pointing out that Hewitt was watching Alex de Minaur’s second-round match and not those of Matthew Ebden and John Millman, which were playing out on other courts.

Australian No.3 Ebden, who fell to Rafael Nadal in the second round at Melbourne Park, also revealed concerns about communication in the Davis Cup set-up, saying he had not been contacted in four months.

The criticism came as former captain Newcombe said it had not been Hewitt’s call to play himself in Davis Cup doubles, which was one of Tomic's major grievances. The 37-year-old won the doubles rubber for Australia against Austria in Graz last September alongside John Peers and according to Newcombe is likely to feature against Bosnia and Herzegovina in Adelaide next month in a qualifying tie for the new Davis cup finals in Madrid in November.

“That decision has really been taken by Tony Roche and Jason Stoltenberg,” said Newcombe, who has publicly supported Hewitt amid the escalating row this week.

“They’re the ones who have said to Lleyton, ‘You’re the best doubles player we’ve got, you have to play but if you’re going to play you need to play some tournaments’. That’s why he plays in the tournaments. He’s got to get some tournament practice.

“He’d rather not have to play doubles in the Davis Cup because he’s got enough going on being captain. But what do you do? If you look at Alex [de Minaur], he doesn’t know how to play doubles. What are your other options? Lleyton could say no but he wants to win Davis Cup ties. Believe me, if there was a better option there is no way Lleyton would play.”

The likelihood of Hewitt featuring in doubles for Australia is even higher under the new format, with ties being played over two days and the doubles to follow the first two singles matches on the first day. The five-man team for the tie in Adelaide is due to be announced next week.

If it is going to include Ebden, then he certainly hasn't heard about it. The 31-year-old had stopped short of endorsing Hewitt as captain in an interview with the Herald this week, indicating there were issues that needed to be dealt with behind the scenes.

He went further after the defeat to Nadal, highlighting what he saw as shortcomings in communication between players and support staff in the Davis Cup system. Ebden, 31, was overlooked for singles berths for Australia’s two ties against Germany and Austria last year when he was one of the top two ranked players available.

“One of the things that does make it difficult is they always leave it until the last day, the day before we have to fly to the tie to tell everyone who is going, which is something I don’t really agree with,” Ebden said.

“It makes it very, very hard for us to schedule, to plan, for commitments to tournaments, to your families, coaches, team. I am not sure why it works that way, nearly all the other countries they know at least a month ago who is going to be playing Davis Cup for them.

“I get it there are things like form but I have not been contacted about Davis Cup in about four months, I haven’t had a word spoken to me about anything about Davis Cup. Am I available, would I put my hand up? Absolutely. But I haven’t heard a word about it. I will always be there with bells and whistles playing for my country if I can. Nothing will change for me.”