AUGUSTA, Ga. — Hideki Matsuyama’s first swing in the final round of the 85th Masters was an unsightly banana-shape slice that would have looked familiar on the nerve-racking first tee of any golf course in the world.

Matsuyama, who entered Sunday’s fourth round with a four-shot lead, hunted down his wayward drive in the left woods and chose an intrepid course, smashing his ball from a bed of wispy pine straw through a slender gap between two trees. Matsuyama’s caddie, Shota Hayafuji, yelped, “Woo,” which elicited a toothy grin from the typically undemonstrative Matsuyama.

Even though he bogeyed the first hole, the tone for his day was set.

A teenage golf prodigy in Japan who has long been expected to break through on golf’s biggest stage, Matsuyama, 29, fearlessly charged the daunting Augusta National Golf Club layout on Sunday to build a commanding lead. Even with three unsteady bogeys in the closing holes, he persevered with a gutsy final-round 73 to win the 2021 Masters by one stroke and become the tournament’s first Asian-born champion. 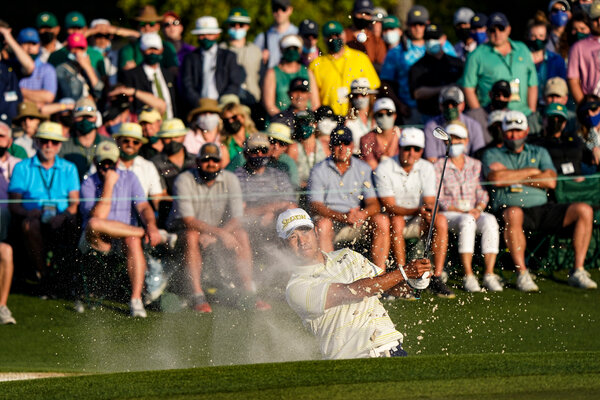 Matsuyama, who finished 10 under par for the tournament, is also the first Japanese man to win a major golf championship. Will Zalatoris finished second and Xander Schauffele and Jordan Spieth tied for third place at seven under par.

Matsuyama’s groundbreaking victory will make him a national hero in golf-crazy Japan, which has had a rich history of producing world-class male golfers who have come close to winning a major championship over the past several decades but have fallen short. Two Japanese women have won major golf championships. Matsuyama’s breakthrough comes at a time of unrest over racially targeted violence against Asian and Asian-Americans.

Matsuyama, who had the low score for an amateur at the 2011 Masters, was ranked as high as second in the world four years ago, but suddenly fell into a slump. Until Sunday, he had not won a tournament since 2017 and his ranking had slipped to 25th worldwide.

But after a sparkling 65 in the third round Saturday — he had an eagle and four birdies in his final eight holes — Matsuyama came into the final round with a heathy cushion atop the leaderboard. He was steady from the start on Sunday, even after the opening-hole bogey. He rebounded with a birdie at the second then reeled off five pars under the crucible of a Masters Sunday.

By then, Matsuyama had a five-shot lead over his rivals. He was cruising until he came to the par-5 15th hole when his second shot bounced over the green and into the water behind the hole. Taking a penalty stroke, Matsuyama prudently chipped to the fringe of the green and two-putted for a bogey.

Schauffele, playing with Matsuyama, pulled to within two strokes of the lead with a birdie. But on the pivotal par-3 16th hole, Schauffele’s tee shot was short and dribbled into a greenside pond. Schauffele would eventually make a triple bogey while Matsuyama three-putted for bogey, dropping him to 11 under for the tournament.

The turn of events made the Masters rookie Zalatoris Matsuyama’s closest pursuer, especially after Zalatoris made a lengthy, downhill par putt on the 18th hole to finish the final round at nine under par, just two strokes behind Matsuyama.

With two holes left to play, Matsuyama hit a brilliant drive in the middle of the 17th fairway, launched a perfect wedge shot to the middle of the green and two-putted for par. At the 18th hole, he hit another perfect drive but his approach shot faded and landed in the greenside bunker to the right of the green. His recovery from the sand stopped 6 feet from the hole, but two putts still gave him the championship.

Matsuyama, who is usually trailed by a large gaggle of media members from Japan at every event he plays worldwide, may have benefited from the restrictions on international travel during the pandemic at this year’s Masters. Few reporters from Japan could attend the 2021 Masters. When asked Saturday night if a diminished media presence was helpful to him, Matsuyama smiled.

“It’s not my favorite thing to do, to stand and answer questions,” Matsuyama said through a interpreter. He said he understood the role of reporters at events, but conceded: “With fewer media, it’s been a lot less stressful for me.”