The anguish of recent years hasn’t disappeared, but it is no longer a motivating factor.

Revenge isn’t driving this Hockeyroos line-up, they want to write their own chapter in the team’s long and proud history. 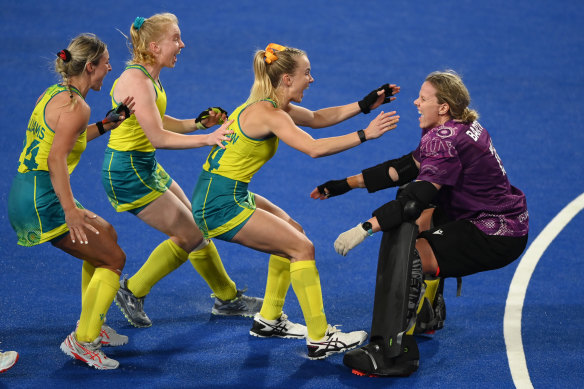 Australia have reason to celebrate, making the gold medal game at the Commonwealth Games.Credit:Getty

The Australian women’s hockey team will face England at midnight Sunday night in the gold medal game in Birmingham. They don’t need to be reminded of recent failures. In the past week, they’ve managed put some of them behind them.

To make the final, the Australians defeated New Zealand, who upstaged the hosts at the Gold Coast Commonwealth Games 4-1 to win gold, and India, who knocked them out of the Tokyo Olympic quarter-finals.

“We talked about that whole revenge kind of mental side of it. But we didn’t want to buy into that because that’s a different story and that story is in the past,” says Amy Lawton, one of 12 players who are competing their first Commonwealth Games, said.

“That’s happened, that’s done, we can’t change that now. It’s a new team for us. A big part of that process is focusing on what’s coming rather than what’s happened.”

The young Victorian midfielder’s rise has been an impressive one. In 12 months Lawton went from playing in under-18 representative hockey teams to playing for the Hockeyroos on the world stage. An incredible 2019 was topped off by winning the Australian Institute of Sport’s Emerging Athlete of the Year award – an award won by star basketballers Lauren Jackson and Ben Simmons, and Olympic cyclist Sam Willoughby.

Born in Worthing, a seaside town west of Brighton in England, Lawton emigrated to Australia as a seven-year-old with her family. But she’s not expecting any favours from the sellout 6000-capacity crowd in Birmingham.

“It’s exactly what we came here for and to take on England at their home Games, with a home crowd, is just going to be an incredible atmosphere,” she said.

“Hockey is not the biggest sport in the world, so to be able to play in front of a crowd that’s going to be up and about is going to be an excellent experience in itself. And yeah, it’s something that I think we’re really excited for and really prepared for.”

Under the guidance of 1998 Commonwealth Games gold medallist Katrina Powell, a largely youthful Hockeyroos outfit entered the tournament with enormous confidence having recently claimed the bronze medal at the Women’s World Cup.

Powell, the first female head coach since Colleen Quinn in 1978, was originally appointed on an interim basis to guide the Hockeyroos through their Tokyo Olympic campaign. After the agonising exit, she was put through a five-week selection process alongside other candidates, according to Hockey Australia. It included two rounds of interviews, reference checks, psychometric testing and a scenario presentation. She will now lead the team to “at least” the Paris 2024 Olympics.

Unbeaten through the pool stage, the Hockeyroos held their nerve in a tight semi-final. Having led 1-0 for most of the game, Australia conceded early in the final quarter before a dramatic final minute where Australia looked as if they were going to score a late winner, only to be denied by a tough Indian defence.

After being locked at 1-1 at the end of regulation time, Australia booked their spot in the final with a 3-0 win on strokes. The penalty shootout was not without controversy through, with Australian Rosie Malone able to redo an unsuccessful first stroke after the clock did not start, which she would score. 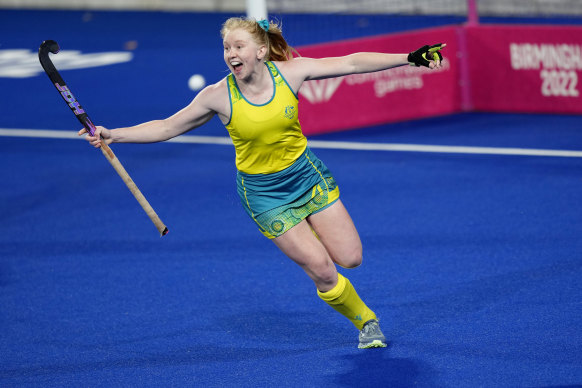 Amy Lawton celebrates after scoring in the shootout against India.Credit:AP

Powell said this week the experience of playing cutthroat matches at the recent World Cup had been invaluable learning and experience.

“Everyone in this group puts the team first. No matter how many games you have played you are expected to contribute,” she said.

“We had some really good experience at the World Cup but we did lose our semi-final, so we’re working really hard to make sure we will be playing for the gold medal and in the biggest game.

“We are putting pressure on ourselves to win the big matches.”

England, also unbeaten in their road to the final, won through by downing New Zealand in a shootout.

Veteran Hannah Martin said the team knew it would have to take its chances against the Australians if they are to win a home gold. With England closing in on Australia at the top of the medal tally, the result could also be critical in determining the overall tally winner.

Get all the latest news from the Birmingham Commonwealth Games here. We’ll be live blogging the action from 4pm-10am daily.