LONDON — For 44 minutes, Chelsea chased. Dutifully, doggedly, Maurizio Sarri’s players trailed after Manchester City, after the ball. They tracked runs. They shuttled from one side of the Stamford Bridge field to the other. They cleared crosses and intercepted passes, and they thumped the ball away, as far as it would go. Then they caught their breath, strained their sinews and got ready to do it all again.

The previous day, as he outlined the significance of this game, Pep Guardiola had made the slightest of slips of the tongue. “We play five hypothetical strong teams in the league, and Chelsea is the last one,” the Manchester City coach said.

What he meant, of course, was abundantly clear: Theoretically, there are five Premier League teams who would pretend to be Manchester City’s equal. But — written down, devoid of intonation and context — it took on another meaning: that those teams are rather stronger in theory than they are in practice.

That is, certainly, the way City had made it look thus far. It has already won, comfortably, at Arsenal and eased past Tottenham at the Spurs’ temporary home at Wembley. It took a point at Anfield, against Liverpool, and would have won had Riyad Mahrez converted a late penalty. Manchester United — the only one of its peers City has faced at home — was dispatched, easily, a few weeks ago.

And for 44 minutes on Saturday, it looked as if Chelsea would go exactly the same way. There is only so long any team can resist the Premier League champion, after all. Sooner or later, Guardiola’s players find a way through. “They always find the spaces,” as Javi Gracia, the Watford manager, said after losing to City last Tuesday.

True, Chelsea was putting up greater resistance than most. For all of City’s slick possession in the first half, for all its effortless dominance, it could create only glimmers of chances: a Raheem Sterling shot hungrily clutched by Kepa Arrizabalaga, the Chelsea goalkeeper; Antonio Rudiger blocking an effort from David Silva with his goalkeeper beaten; Cesar Azpilicueta hurling himself in the way to deny Leroy Sane.

So apparent was City’s superiority, though, that a breakthrough seemed inevitable. It was treating Chelsea — a team that had, until just a few weeks ago, been unbeaten in the Premier League; a team packed full of Premier League champions; a team that boasts Eden Hazard, arguably the most gifted player in England — like all of those midtable also-rans it swats aside with such contemptuous ease.

But then came the 45th minute and Chelsea’s first meaningful attack of the game — a clever, if slightly hopeful, cutback from Hazard, and an unerring finish from N’Golo Kanté, the most dutiful, most dogged chaser of them all. Stamford Bridge, pushed into near silence by City’s precision, came alive. And so, too, did the Premier League title race.

A few weeks ago, Guardiola traveled to Liverpool — hostile territory, in theory — to give a talk to the city’s university. He was asked, in a brief question-and-answer session after the formal discussion, what he liked to read. 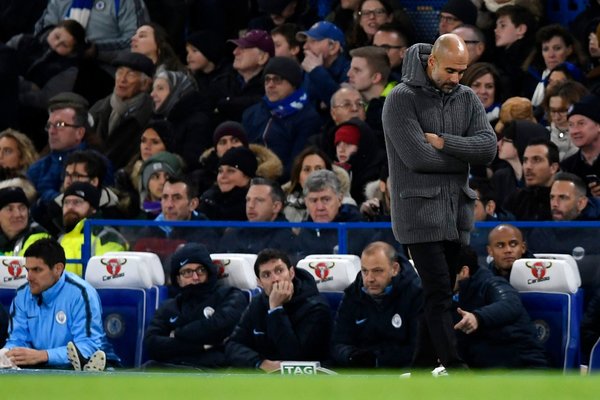 Guardiola has, from childhood, been a voracious reader. He was obsessed, as a teenager, with a book by Albert Cohen, “Bella del Senor’’; he counts the author David Trueba as a friend and has given Trueba’s work to many of his players. Now, although he keeps a “nice library,” he said in Liverpool that he finds he only has time to read poetry. Anything longer, and after a while, his mind starts to drift. “I think, ‘Liverpool and Jurgen Klopp,’ and I cannot focus,” he said on stage.

At the time, his comments seemed to reflect either the restlessness of the obsessive or a man generously playing to the crowd. Few seriously felt that Klopp, and Liverpool, were likely to strain City too much.

All of City’s other challengers had already fallen: Arsenal almost immediately and Manchester United only a little later. Tottenham had given away ground early on: too much, surely, to claw back. Chelsea had lasted until November before stumbling. Liverpool deserved praise for being the last team standing, but though it was unbeaten, its performances had been far from convincing.

It was clinging to City — admirably — but Guardiola’s team looked too smooth, too strong, too good. At some point, City would race off into the distance. It seemed to be competing only with history, driven only by its own determination to beat its own records.

“People said we were invincible, we were perfect, we would win the league in February,” Guardiola reflected on Saturday night. “But you said that, not me.”

Manchester City is, of course, still the favorite to win the Premier League; it will still take a remarkable season from Liverpool to deny Guardiola a second consecutive championship.

But Kanté’s goal — and then a header from David Luiz that secured Chelsea’s 2-0 victory on Saturday and ended City’s 21-game unbeaten run — has brought doubt where there was only certainty. City’s procession to the title has turned into a race.

There was no blueprint in Saturday’s game for others to follow. Chelsea did not identify a frailty in the machine that Guardiola has built, some sort of glitch in the algorithm. Instead, this was the sort of triumph that was, if not unique to Chelsea, then certainly something of a specialty in west London.

It was a victory for all those old virtues — tenacity and industry and a refusal to wilt — that this club acquired a long time ago, in the first reign of Jose Mourinho, and that it has somehow been able to transfer from generation to generation. It is not the sort of thing that Everton can mimic next week when it plays City, or that other managers can hope to copy and paste to their own team.

But it gives just enough hope to everyone else that there is a way that City might be stopped, if not from winning the Premier League, then certainly from making a mockery of the English conceit that its top division alone is immune to domination. For most of the first half of this season, City has set an almost unbearable pace. Before Saturday, before Stamford Bridge, it had dropped just four points and found itself trailing in a game for just 12 minutes.

And yet, now, it is Liverpool — thanks to a 4-0 win at Bournemouth earlier in the day — that sits atop the Premier League. It is Klopp’s team that remains unbeaten. And it is Manchester City — the reigning champion and the champion-elect, the team that has made even the strong look weak — that is chasing. For now, at least.