Melbourne Victory's import pair Keisuke Honda and Georg Niedermeier are loving life in Australia, but bemused at the focus on their training standards.

Honda, the Japanese superstar, has particularly caught the eye since arriving in the A-League, stringing together a series of terrific performances. 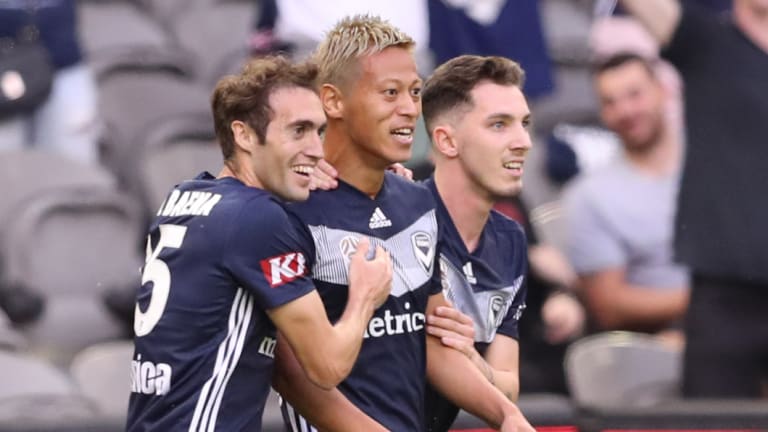 High standards: Keisuke Honda (centre) trains even on days off and wants Victory youngsters to do the same.Credit:AAP

He has three goals from midfield in six matches, helping Victory to wins in their last four outings and a share of title favouritism.

Much has been made of Honda's diligence and willingness to do "extras" in training, but the man himself said he didn't know any other way.

"When I played in Italy, Russia and Holland I surprised people," he said.

"I don't think it's usual for Australian people."

Honda has also taken on the role of Cambodian national team coach, in addition to his playing and business duties.

He said he was eager to impart his work ethic and knowledge to Victory's younger brigade.

"I'm talking with younger players to do more. I think that they should make effort even when they get a day off," he said.

"That's why Im here. I want to change.

"I want to give them other mentalities, other culture, other habits."

Niedermeier, who came into the sport through Bayern Munich's youth academy, agreed with his teammate.

"To be honest I'm more used to Keisuke's attitude than the Australian attitude," he said.

"The heat makes us train only one time a day. You shouldn't rest in the afternoons and Keisuke is a pretty good example for the young players in this country. They should keep on working on days off.

"We have lots of time … when you don't play in the first 11, you should train harder and work harder."

Honda's impact has been so great that fans are already urging the club to lengthen his multi-million dollar deal into a second season.

The long-term Blue Samurai player has stated his intent to continue playing until mid-2020, eyeing a swansong at the Tokyo Olympics.

He appeared cool on the idea of another season when asked if he would make Melbourne a longer-term home.

"I like to move in many countries. I'm satisfied but I don't think I will stay here for a long time."