MELBOURNE, Australia — The chatter about the speed of the tennis courts at the Australian Open this year started innocently enough.

It was just before the ATP Cup, the team competition at Melbourne Park that preceded the Australian Open, the year’s first Grand Slam event. Dominic Thiem of Austria, the winner of last year’s United States Open, mentioned he had been practicing at John Cain Arena, and the ball seemed to be coming off the blue hardcourt pretty darn fast.

Days later, Novak Djokovic, the world No. 1 and eight-time champion of the Australian Open, said the court at Rod Laver Arena, which he refers to as his second backyard, felt strikingly fast. Then, after his second-round defeat of Frances Tiafoe of the United States, Djokovic said it was playing faster than at any other time since he began playing here 15 years ago, which is not a bad thing for perhaps the game’s most precise and effective ball striker. He said it again after beating Milos Raonic in the fourth round Sunday night.

On Friday night, Thiem, the No. 3 seed, came back from two sets down to beat the fan favorite Nick Kyrgios of Australia in the third round, and spoke of all the challenges he had faced — a hostile crowd, Kyrgios’s booming serve and “the fastest Grand Slam Court I have ever played on.”

Machar Reid, the head of innovation for Tennis Australia, knows the most about the condition of the courts. He said pretournament tests produced results similar to last year, the first year the Australian Open contracted with GreenSet, which supplies the acrylic coating of the courts, essentially the paint.

“What we aim for is consistency, year after year, not just here but for all the facilities in the country, so the players are playing on a similar surface no matter where they are,” Reid said in an interview last week. “All our indications are that the courts are the same.”

Without getting overly technical in evaluating the tests against the experiences of multimillionaire athletes who have hit countless shots on countless courts and are sensitive to the tiniest changes in conditions, it is worth noting that tennis players consistently suffer from the Goldilocks syndrome.

Tennis courts are always either too fast or too slow, too slick or too sticky. Players can shift their opinion midway through a match if the weather changes. They are not an easy lot to please.

Men seem to obsess and complain about the speed more than women, perhaps because they hit harder. A serve traveling at 130 miles per hour is plenty difficult to return on a normal court. On a too-fast court it is tough to get the racket on it.

The International Tennis Federation, the sport’s world governing body, classifies tennis courts into one of five categories for its Court Pace Rating: slow, medium-slow, medium, medium-fast and fast. A surface receives its classification after various tests that include measuring how high a ball bounces when it hits the surface at different speeds and how easily it slides when it is dragged across it, as well as other factors.

The red clay of the French Open is the slowest Grand Slam surface. Playing on the grass of Wimbledon in certain conditions can feel like playing on an ice rink, with the ball skidding and barely rising above a player’s shins. The slightly cushioned hardcourts at the United States Open and the Australian Open are plenty fast, but the ball generally pops up. The speed can be adjusted from year to year depending on the grittiness of the acrylic coating — think of it as adding sand to paint.

All the courts at Melbourne Park were polished and given a fresh coat of the GreenSet acrylic before this year’s tournament. Reid said Tennis Australia aims to provide a court that lands right in the middle of the I.T.F. classification scale because the organization believes that kind of court produces the best tennis.

A court rated in the fastest category would too heavily favor the big servers and prevent points from developing. A slow court would encourage players to stay back and turn each point into a defensive chess match. A medium court allows tennis to hit that delicate balance between athleticism and strategy.

The problem is tennis tournaments don’t take place in a static environment. No matter what the numbers say, how “fast” a tennis court plays is the result of an incalculable and ever-changing interaction of the ball, the surface of the court and the climate.

Changes in the weather can have a drastic effect on how a ball moves. Cooler weather can make a tennis ball feel like a rock on the racket and lessen its bounce. When the temperature rises, the ball becomes livelier. There have been a few hot days in the past month, but the weather has been rather cool for the Melbourne summer.

Then again, racket and string technologies are always improving, allowing players to hit harder, with more topspin than ever. Also, courts generally speed up with increased play, and the courts at Melbourne Park have experienced significantly more play than normal this year. Players began practicing on the courts three weeks before the Australian Open. Five separate competitions took place the week before the tournament started.

And yet it’s a mystery whether the courts are truly faster and how big a factor that will play in the outcome of the tournament.

Fifth-seeded Stefanos Tsitsipas of Greece, whose game is laced with power, described the court at Rod Laver Arena as one of the slowest at Melbourne Park and not that different from the courts at other Grand Slam events.

But Diego Schwartzman of Argentina, one of the game’s great baseline defenders, described the courts as “really, really quick.” Schwartzman, the No. 8 seed, lost in the third round to Aslin Karatsev, a hard-hitting Russian ranked 114th in the world and playing in his first Grand Slam singles tournament. Karatsev dispatched Schwartzman in three sets. 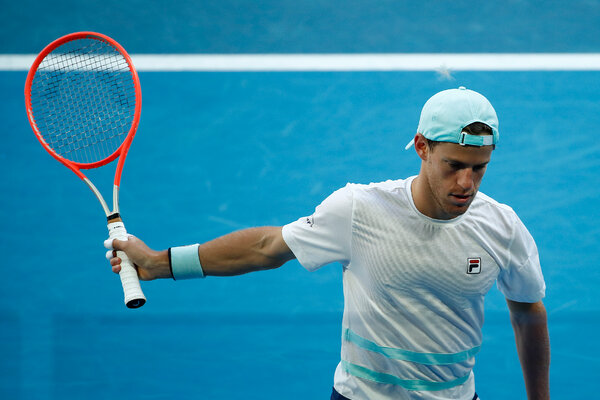 In the fourth round, Karatsev came back from two sets down to defeat Felix Auger-Aliassime of Canada, the No. 20 seed.

“I played here before, and it was slower,” Karatsev said. “But for me, it’s good. I think the fast surface for me, it’s always good.”

On Sunday, Thiem, the big hitter who started all this chatter, lost badly to Grigor Dimitrov of Bulgaria at Rod Laver Arena, 6-4, 6-4, 6-0.

“It was very, very fast, probably the fastest Grand Slam I’ve played so far,” Thiem said. “But that wasn’t the issue.”

After the tournament, Reid said, he will evaluate the reams of data produced by the Hawk-Eye system, which takes hundreds of measurements per second of the ball and the court position of each player. It should provide some insight into whether the courts were faster this year. Or maybe it won’t.