Bernard Tomic says he felt “intimidated” by Lleyton Hewitt during a hotel room exchange nine years ago in which he claims the former world No.1 pressured him to reveal who was against him at Tennis Australia.

Tomic’s father told the Herald last month that an injured Hewitt had come to the then 17-year-old’s Melbourne hotel room while he was staying there for his maiden Davis Cup tie, against Taiwan in 2010. Tomic snr claimed Hewitt had been unhappy with public comments made by the teenager and had left him with “trauma” by telling him he would not play for Australia again if he didn't answer his questions. 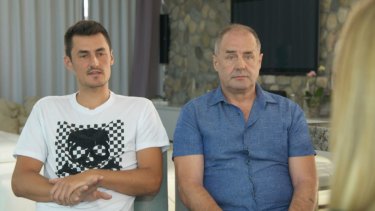 Serving it up: Bernard and John Tomic on 60 Minutes on Sunday night.Credit:Channel Nine

Now, as the bitter war of words between the Davis Cup captain and the former top-20 player continues, Tomic has broken his silence on the alleged episode.

“He sat me down and said, ‘You’re not playing Davis Cup mate tomorrow … unless you tell me these things’,” Tomic said of Hewitt during an interview with 60 Minutes on Channel Nine.

“I was intimidated, I was harassed. That’s all I’ll say. I was 16 years old [sic] at a Davis Cup tie in Melbourne, Grand Hyatt [hotel]. I’ll stand by that. Further matters will be taking place.”

His father, John Tomic, told the Herald during the Australian Open they would be taking legal action against Hewitt, and now says he has retained two lawyers. 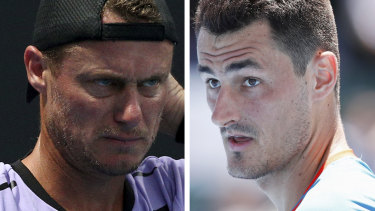 Falling out: The rift between Lleyton Hewitt and Tomic shows no sign of deescalating.Credit:AAP

In a statement released on Saturday, TA chief executive Craig Tiley said of the 2010 claims: “We are not aware of any formal complaint lodged by either John or Bernard.” Asked during the Open about the alleged hotel exchange Hewitt’s manager, David Drysdale, did not want to comment beyond saying he knew “nothing about it”.

The allegations will be probed by TA, who according to TA performance director Wally Masur, will conduct a review of the Davis Cup set-up.

“It is an accusation, and I guess we’ll have to see how far that accusation goes,” Masur said on 60 Minutes.

Tomic also used his latest appearance before the cameras to strongly refute Hewitt’s allegations that he made physical threats against his family after the pair fell out badly over the past two years.

“But did I mention his family? That’s pretty low. How low do you have to be to mention family, kids, and stuff? I think that’s one of the lowest things that I’ve ever heard from him. I stand by my threats towards him, but not to his family.”

While Hewitt has declared Tomic will never play Davis Cup again under his watch, there has been confusion about TA’s official position.

Tiley had a week ago appeared to have a different take than Hewitt, saying when asked about Tomic during a radio interview that “the doors are always open for players to compete”. After Australia qualified for the new-look Davis Cup finals by defeating Bosnia and Herzegovina on Saturday, the stance had changed.

“Lleyton is right to say Bernard will not be considered for Davis Cup,” Tiley said. “Bernard does not meet the standards of behaviour and commitment to himself, the team or the sport.”

However, Masur was not as unequivocal.

“[Hewitt] feels that he put a lot of effort into Bernie over a couple of years. And I certainly think he feels personally betrayed,” Masur said.

“I think that he’s taken it personally. But at the end of the day, Lleyton is an employee of Tennis Australia. He reports to me. I report to Craig Tiley. So, there is a chain of command. He doesn’t have that sole discretion.”