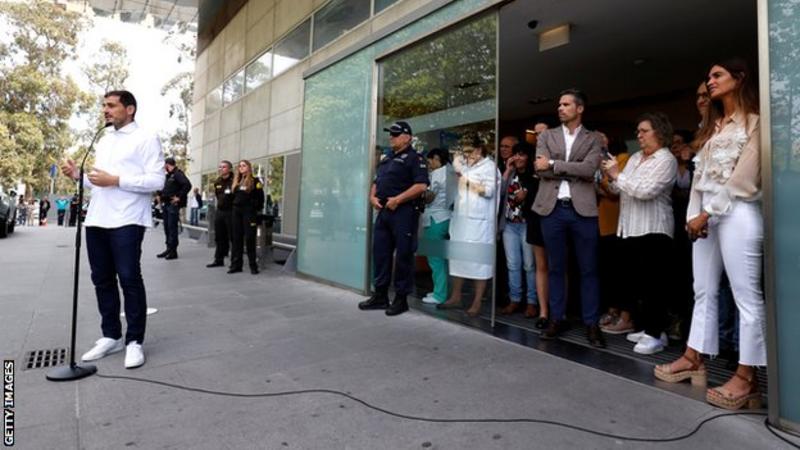 The wife of Spain’s World Cup-winning goalkeeper Iker Casillas has revealed she is fighting ovarian cancer, just three weeks after her husband suffered a heart attack.

The news comes after Casillas suffered an acute myocardial infarction while training with Porto earlier this month.

“We hadn’t yet recovered from a shock, but life has surprised us again,” Carbonero said.

In a statement on Instagram, 35-year-old Carbonero who has two children with Casillas, said: “This time it’s my turn, this six-letter word that I still find hard to write.

“A few days ago at a check-up, the doctors found a malignant ovarian tumour and I have already had surgery.

“Everything went very well, fortunately we have caught it in good time, but I still have a few months of fighting left while I have the relevant treatment.

“I am calm and confident that everything is going to be OK. I know the road will be hard but also that it will have a happy ending. I have the support of family and friends and a great medical team.

“I want to ask that from here the media gives me the respect and understanding with which you have always treated me, especially in these difficult and delicate times for me and my family.”

Speaking outside the Hospital CUF Porto on 6 May, 38-year-old Real Madrid legend Casillas said he would rest “for a couple of weeks or a couple of months”.

“The most important thing is to be here,” he told reporters after his recent health scare.

Casillas joined Porto in 2015 from Real Madrid where he made 725 appearances and helped them win three Champions Leagues and five La Liga titles.

Following his move to Porto, he won the Portuguese title last season and holds the record for the most Champions League appearances with 177.