Once again, it was the underdog Giants across the field who were leading the game, and on his sideline Tom Brady could not help but vehemently bang his helmet on the bench in enduring frustration. Since Brady had seen this turn of events more than once before, he had safely removed his head from the helmet first.

That was in the first half of the Tampa Bay Buccaneers’ visit to MetLife Stadium on Monday night. About 90 minutes later, in the contest’s closing seconds, with the Buccaneers clinging to a slim lead, Brady returned to the team bench as the Giants ran a play near the Tampa Bay goal line that could send the game into overtime.

Still and motionless, Brady awaited the result with the grimmest of expressions.

But Eli Manning is no longer a Giant, and Brady traded in his New England Patriots jersey in March. The Giants, defeated in 17 of their last 20 games, fell just short again, losing, 25-23.

With victory assured, Brady smirked. It was most certainly not a smile, nor was it a grin. Call it a knowing snicker, but at that moment, it felt as if Brady was more than simply relieved to again exorcise an old demon in the Giants, against whom he has three consecutive victories since the bitter Super Bowl defeat after the 2011 regular season.

Yes, any opportunity to add to the woes of the reeling Giants was a bonus, but Brady could be forgiven if he was sensing the accomplishment, and great timing, of his daring career shift eight months ago. Not only are the Brady-inspired Buccaneers (6-2) one of the best teams in the league, the Patriots (2-5) may be staggering toward a complete overhaul with Coach Bill Belichick — of all people — even conceding his team is undermanned.

As Brady was warming up on the field before Monday’s game, the N.F.L. was newly absorbing comments from Belichick, who said his team’s lack of depth this year was due to the Patriots’ abundant spending in recent seasons, which left them with little room to pursue players in the 2020 off-season.

“It’s obvious we didn’t have any money,” Belichick told Boston sports talk radio station WEEI on Monday. “It’s nobody’s fault. I mean, it’s what we did the last five years. We sold out and won three Super Bowls, played in a fourth and played in the A.F.C. championship game. This year, we had less to work with. It’s not an excuse, it’s just a fact.”

In the wake of the Patriots’ troubles so swiftly after Brady’s exit from New England, all manner of comparisons are in vogue. Most obvious, Brady’s six victories in Tampa Bay and the two earned by his Patriots successor, Cam Newton, who has six interceptions and one lost fumble in his last four games. Brady has one interception and has not lost a fumble in his last six games.

More popular when it comes to fun facts in the aftermath of Brady’s departure from his football home for the previous 20 seasons is his record as a regular season starter in New England and Tampa Bay, 225-66. Belichick’s record as a head coach without Brady as his starting quarterback with the Patriots and when he was head coach in Cleveland: 56-68.

After Monday’s game, Brady may have been only 200 miles from the site of his many glories in Foxborough, Mass., but the conversation was entirely about his new workplace. Brady was disappointed in his early play on Monday night, when the Giants built a 14-3 lead and Brady was being hounded by a persistent Giants pass rush. (Some things never change when Brady faces the Giants.)

“I had guys open that I missed,” Brady said of his wide receivers, who at that juncture were not actually getting much separation from their defenders. “We’ve got to execute better.”

“I’ve never driven to the Meadowlands and the scene is empty — we did not find energy fast enough,” Arians said.

Then, referring to the Giants rookie coach Joe Judge, Arians added: “We got kicked in the mouth and credit Joe Judge — he had his team ready. They played their tails off.”

The Giants did indeed have seemingly every early advantage, and if Daniel Jones, the Giants second-year quarterback, had not overthrown or misfired in attempts to connect with his best target, Darius Slayton, who was open downfield several times, the Giants might have been leading by three touchdowns, or more.

But Jones continues to make the same mistakes repeatedly, most notably in his decision-making when under pressure. Monday, instead of conceding a sack when under siege or heaving the football out of bounds, he threw two needless, reckless interceptions. The second of those turnovers, on the second play of the third quarter, led to 9 unanswered points by the Buccaneers and their first lead in the game.

By the fourth quarter, Tampa Bay had extended its lead to 25-17, but Jones almost redeemed himself when he led the Giants on a 13-play, 70-yard drive that ended with a precise, impressive throw to wide receiver Golden Tate in the back of the end zone for a touchdown. A 2-point conversion attempt to tie the game with 28 seconds remaining was unsuccessful when Buccaneers defensive back Antoine Winfield Jr. broke up a Jones pass intended for running back Dion Lewis at the goal line. A collision between Winfield and Lewis on the play drew a penalty flag for defensive pass interference but was nullified after a consultation between four game officials. 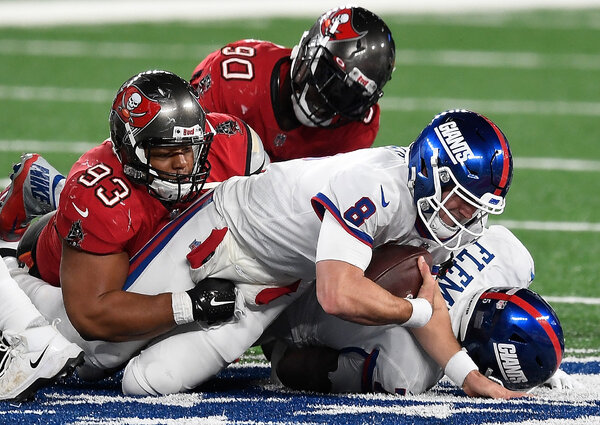 At the game’s end, an incensed Judge stormed from the sideline and appeared to be screaming in the direction of one or more officials.

Brady, who completed 28 of 40 passes for 279 yards and two touchdowns, left the field quickly, his sights no longer on his old nemesis the Giants but on an altogether new rival in the N.F.C. South, the New Orleans Saints, who are the Buccaneers’ opponent Sunday and defeated Brady in Tampa Bay’s season-opening game.

But there was a last scene. Buccaneers tight end Rob Gronkowski, who caught his 93rd touchdown pass from Brady early in the third quarter, jogged up to his longtime teammate and bumped fists. Together, the New England expatriates jogged stride for stride toward the visiting locker room.