MANCHESTER, England — Not once, no matter how bad the temptation or how high the stakes or how deep his frustration, has Pep Guardiola done what he is supposed to do. He has not called Liverpool lucky, or hinted at a conspiracy among referees in awarding penalties at Anfield, or questioned whether his chief rival had the resolve to stay the course.

Instead, Guardiola, the Manchester City manager, has been unremittingly, unapologetically positive. Liverpool and its manager, Jürgen Klopp, kept him awake at night, he said earlier this season. He has called Klopp the best manager in the world for crafting high-energy teams. He has said, as recently as last week, that he expects Liverpool to win all of its remaining games in the Premier League.

Klopp, of course, has been just as bad. Manchester City, he said around Christmas, is the best team in the world. A few weeks later, he said he had tried to find a weakness in Guardiola’s team, and come up short.

This is not the usual timbre of discourse in a Premier League title race, particularly one so delicately poised that at this late stage, a single misstep from one would, most likely, hand the crown to the other. Much more familiar is the sort of playground psychological warfare practiced by Alex Ferguson and José Mourinho, where every word was a provocation. 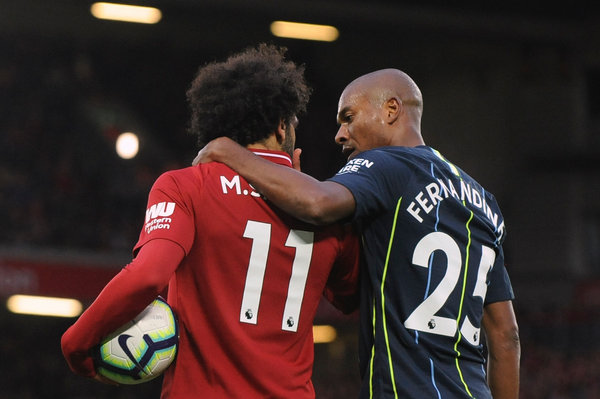 Initially, then, it was easy to assume that Klopp and Guardiola were simply trying to kill each other with kindness, even if it was not immediately clear what advantage, for example, Klopp’s describing Manchester City as “the best team in the world” might confer on Liverpool.

So powerful is the legacy of Ferguson, so deep-seated the obsession with mind games, that it has taken a while to realize that there are no thorns hidden among the garlands, to remember that praise can have a function other than piling pressure on an opponent. Not everything is a play. Klopp admires the team Guardiola has built. Guardiola respects the transformation Klopp has overseen. It is the same among the players: Virgil van Dijk has voted for Raheem Sterling as player of the year. The ultimate destination of the title will not change that. Compliments can be sincere.

With the race so tight — Liverpool (82 points) ahead at the moment, but City (80) with a game in hand — that mutual admiration does not extend to the fans of the two clubs, of course. There is no particular historical enmity between Manchester City and Liverpool, but over the last year a distinctly modern rivalry has started to take shape.

At first, it seemed to manifest primarily online, performative and point-scoring, in which Liverpool resented City’s wealth, ambition and relevance, and City chafed at Liverpool’s history and fame. Over the last year that has changed, bleeding into the three-dimensional world, invoked in songs that sweep down from the stands at the Etihad Stadium, in particular.

The great flash point, of course, was the attack on Manchester City’s team bus outside Anfield before last year’s meeting in the Champions League quarterfinals, an act met with outright and understandable fury by City. The direct competition between the teams this season, the fact that their fortunes are so inextricably intertwined, has served only to oxidize it.

Even as the animus on the outside has hardened, relations on the inside remain cordial. When an article appeared earlier this year suggesting Fenway Sports Group, Liverpool’s owner, was leading a campaign to persuade the Premier League to investigate Manchester City’s breaches of Financial Fair Play rules, Liverpool moved quickly to offer City assurances that was not the case.

The connections are even closer among the staff. Two of Liverpool’s senior scouts, Dave Fallows and Barry Hunter, were recruited from City; so, too, was Lee Nobes, the head physiotherapist; Mona Nemmer, Klopp’s head of nutrition, worked with Guardiola at Bayern Munich (and made such an impression that when he first arrived in England, Guardiola asked if the clubs might be able to share her expertise).

Rodolfo Borrell, a key member of Guardiola’s coaching staff, meanwhile, made his name at Barcelona, but was first brought to England by Liverpool; he spent more than four years on Merseyside before moving to City in 2014. Darren Hughes, the lead coach at City’s academy, is among three staff members hired from Liverpool the same year.

There is a limit to those bonds, of course. There is a lingering sense among some at City that Liverpool is offered preferential treatment by the news media, has a larger contingent of former players in television studios than is easily justified and receives rather more coverage than its recent achievements warrant. After the team waited three decades for a championship, Liverpool’s desperation is plain; for City, the pleasure of a fourth title in seven years would be heightened by the identity of its vanquished opponent.

In a way, though, each team should be grateful for the other. City’s excellence has served to accelerate Liverpool’s improvement, persuading Fenway Sports Group to make Alisson Becker (briefly) the world’s most expensive goalkeeper, and to turn van Dijk into the costliest defender in history. City had set such high standards that there was simply no other choice but to invest; anything else would have been acquiescence to fate.

And while Manchester City fans might have found last season’s procession to the title — when City became the first team in history to record 100 points — substantially less stressful, Liverpool’s emergence as a genuine rival has not diminished City’s greatness. Rather, it has accentuated it.

Liverpool remains on course to record the finest season, in terms of results, in its history. If it wins four of its five remaining games it will have completed at least the third finest campaign in English history, bettered only by City last year and, potentially, City this.

Picking up a century of points last year won Guardiola’s team lavish, warranted praise; in those slow weeks before the World Cup, its precise place in the pantheon was debated ad nauseam. Was this the greatest team the Premier League had seen? How did it stand in comparison to Arsenal’s Invincibles of 2004 or Manchester United’s 1999 treble winners?

Retaining the title would strengthen its case, of course, and doing so in these circumstances would only compound it. Reaching 100 points, with the rest of the competition ground into dust, was impressive, but it was also somehow detached, abstract: a mountain rising, sheer and inexplicable, out of a desert. City had to create a challenge for itself, because none emerged elsewhere. The strength of Liverpool’s challenge this year would offer scale, and context, to City’s peak.

More important, though, it has injected some emotion into it. In Guardiola’s mind, there is such a thing as the perfect goal: a move in which each of his players touches the ball once, flowing from goalkeeper to striker, before someone applies a finish. He dreams of dominance uninterrupted; he seeks perfection. He wants to render his opponents irrelevant.

That is what happened last season. At no point was there a threat to City’s quiet, surgical dissection of the Premier League. There was no disturbance, no jeopardy: just the serene progress of a team, with the ball, from one end of the season to the other. Guardiola is the finest coach of his generation because he aims for that. City is the best team in the world because it can achieve it.

It is of no concern to Guardiola that it may not be especially entertaining to watch: not just for the dispirited fans of his latest victim, or the putative, elusive neutral, but after a while perhaps even for the fans of his own team. Each game finished off inside 20 minutes, the other 70 nothing more than killing time. Opponents too cowed even to try to defy the odds. Little risk of defeat, and a superiority so absolute that there are few consequences of one, anyway. Guardiola wants to produce art, and should be praised for it, but art is not the same thing as sport.

Almost to the end, Liverpool has ensured that has not happened. As Klopp has said countless times — it is almost his mantra now — City has not been able to “get rid” of his team, not yet.

It has not been allowed to turn the Premier League into a 10-month victory parade; there has been, throughout the season, a very real sense of jeopardy. That is why Klopp and Guardiola have traded bouquets, rather than barbs. There has been no need for the soap opera of mind games. What Liverpool and City have crafted is something infinitely more compelling: two teams, trying to prove they are worthy of the other’s admiration, to live up to the compliments.