So maybe — maybe, maybe, maybe — this is how the Tampa Bay Buccaneers’ thrust into N.F.C. contention begins.

Maybe it begins with some anticipatory mastery, with a cornerback intercepting a quarterback who never throws interceptions. Or with an almost-full complement of offensive skill players available at last, their renewed health powering consistency, and efficiency. Or with the increased involvement of a tight end who unretired for days like Sunday, when he’s mincing defenses and catching touchdowns and spiking footballs, leaving Gronk-sized divots in the grass.

The Green Bay Packers arrived in the Florida heat as one of the N.F.L.’s four unbeaten teams, with an offense gaining yards and scoring points and throttling opponents at a maximum pace. They trudged off the field at Raymond James Stadium pummeled and discombobulated, unsettled by the outcome and the margin of defeat, yes, but also by how completely Tampa Bay exploited the Packers’ every deficiency.

The Buccaneers’ 38-10 victory doubled as validation of an admission they made in the off-season and the commitment they demonstrated to correct it. With their defense ascending, the front office recognized that the pathway to relevance — and indeed, the franchise’s first playoff berth since the 2007 season — entailed acquiring the stylistic antithesis of their incumbent quarterback, Jameis Winston, who had a pesky habit of throwing the ball to the other team. 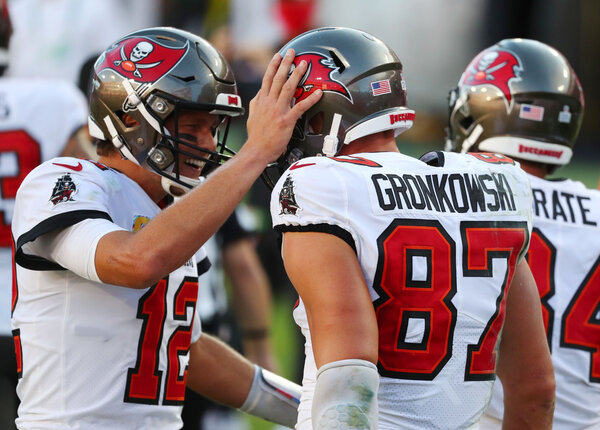 On offense, with the Buccaneers running for nearly as many yards (158) as Brady passed for (166), they didn’t commit a turnover or allow a sack, and converted all four red-zone opportunities. On defense, they converted two takeaways — including Jamel Dean’s return for a touchdown — into 14 points. As a team, Tampa Bay wasn’t penalized even once. The blueprint evoked that of Brady’s former team — where did he play again? New England? — and recalibrated expectations.

“We kind of set a new standard for ourselves,” Coach Bruce Arians said.

Coming off a 20-19 Week 5 loss to Chicago in which Brady may or may not have forgotten (OK, he did) what down it was during a late drive, the Buccaneers regained equilibrium by stuffing the N.F.L.’s most prolific offense. The Packers (4-1) entered Sunday leading the league in points and yards per play and, according to Pro Football Reference, were the first team in league history to score 150 points in their first four games without a giveaway. Undeterred, Tampa Bay’s defensive coordinator, Todd Bowles, told his unit all week that it was going to smother Aaron Rodgers like no other defense had done so far.

Assembling the defense after Green Bay went ahead by 10-0, Bowles told his charges that they were respecting Rodgers and the Packers too much. “They’ve got to earn our respect,” Bowles said, as recounted by linebacker Devin White, who led Tampa Bay with 10 tackles and a sack. Then Bowles reminded his charges of his prediction, and their mission.

In torching the Vikings and the Lions, the Saints and the Falcons, Rodgers had yet to encounter a defense — a secondary, especially — as physical and aggressive as Tampa Bay’s. Facing third-and-10 at his 22-yard line, Rodgers dropped back to pass, his eyes never leaving Davante Adams along the far sideline, which Dean noticed, too.

“When I saw the formation, then I saw how everything started to develop, I’m like, ‘I have to make this play because I know what’s coming,’” Dean said. “And then once I saw him throw it, I was like, ‘Yeah, it’s mine.’”

It was. Undercutting Adams’s route, Dean grabbed the ball and raced 32 yards for a touchdown. Three plays into the Packers’ ensuing series, Mike Edwards snatched a deflected pass and ran down to the Green Bay 2. On the next snap, Ronald Jones rumbled into the end zone for the first of two touchdowns.

The Packers punted. Tampa Bay scored. The Packers punted again. Tampa Bay scored again — a 12-yard fade from Brady to Rob Gronkowski, his first touchdown since December 2018 and the 91st time they’ve connected for a score, counting the postseason. Across a dizzying 12 minute 30 second span of the second quarter, the Buccaneers held Green Bay without a first down and scored 28 consecutive points.

“We always pride ourselves on having great stars on the offensive side of the ball,” White said, adding, “We want this team to be a defensive team.”

The moment of surrender came after Tampa Bay had sacked Rodgers four times, after its array of pressures and coverages had condemned him to the third-lowest passer rating (35.4) and third-worst completion percentage (45.7) of his career, when LaFleur pulled him — for his own health, perhaps — for the backup Tim Boyle. Soon, Brady departed, too, in place of Blaine Gabbert, sacrificing another series of work with players he’s still coming to learn, coming to trust, for the privilege of savoring victory.

The backdrop to Brady’s first season in Tampa Bay — chaotic off-season, truncated training camp, managing injuries to receivers Chris Godwin, Mike Evans, Scotty Miller and O.J. Howard — has disrupted the Buccaneers’ continuity; it stands to reason that they, as Brady continues adjusting to a new offense and a new play-caller, will improve over the next few months as much as any team in the league.

In a product of the N.F.L.’s interconference scheduling formula, only twice before had Brady and Rodgers faced each other as starters: in 2014, a Green Bay victory, and in 2018, a New England win. That quirk consigned Brady and Rodgers to an endless state of parallel play — excelling at the same time, but apart from, the other. By signing with the Buccaneers, Brady created more opportunities for tantalizing games against N.F.C. contemporaries like Drew Brees, whose New Orleans Saints reside in Tampa Bay’s division, and Rodgers, who may very well get a rematch come January.

However enticing, it’s imprecise to view Tampa Bay’s romp — as well as a potential postseason meeting, should it come to pass — as a matchup between Brady and Rodgers. They were facing defenses scheming to thwart them, and not facing each other. Brady was better this time, his team was, too, and if the Buccaneers are to go on to win their first division title since 2007, they might remember Sunday as the day that catapulted them there.