At a speaking engagement last week, Adam Silver, the N.B.A.’s commissioner, gave the audience a glimpse of what teams in his league think about the prodigious talent possessed by the projected No. 1 draft pick Zion Williamson.

“Just assume we didn’t have a lottery,” Silver said. “You’d have a team that won zero games — they’d say, ‘Whatever it takes to get Zion.’”

Silver may have been exaggerating, but what made the line so notable was that it might also be true. For a guaranteed shot to select Duke’s Williamson on June 20, there surely is a team (or teams) out there willing to go 0-82 if such rampant losing could ensure the top pick.

But that’s not how the N.B.A. draft lottery works. The league’s new format — its fifth tweak to the system since the Knicks unforgettably won the maiden lottery in 1985, getting the chance to draft Patrick Ewing — gives the league’s worst team only a 14 percent chance at getting the top pick on Tuesday night.

That team, after a dour 17-65 campaign, is the Knicks. But the league’s new lottery rules also give the teams with the second- and third-worst records (Cleveland and Phoenix at 19-63) a 14 percent shot at No. 1. The odds have been flattened at the top to discourage tanking, the practice of losing intentionally to improve draft position. 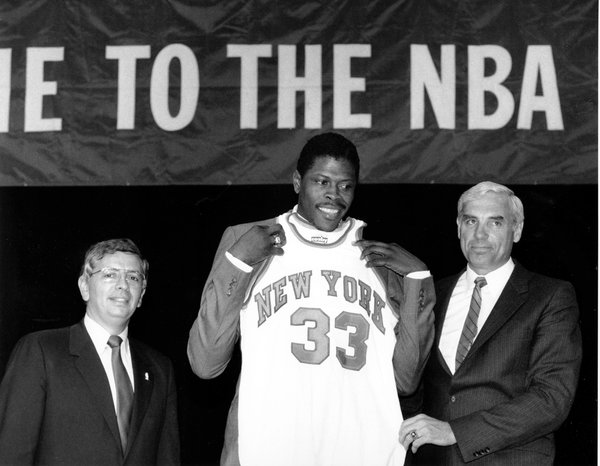 “We’re always trying to calibrate that balance on one hand, allowing the teams that are most in need of a top pick — the very purpose of a draft — against incentives to lose,” Silver said in a moderated discussion at the Economic Club of Washington, D.C.

In an attempt to counter their daunting odds and rekindle what they perceive as 34-year-old magic, Knicks officials have recruited Ewing, now the head coach at Georgetown, to represent the franchise on the lottery dais.

Under the previous format, the Knicks would have had a comparatively robust 25 percent shot at the No. 1 pick. They also would not have been able to slip lower than No. 4 in the old system; in the new system, they can slip as low as the No. 5.

The hype generated by Williamson’s franchise-player promise recalls the N.B.A.’s seminal draft lottery in 2003, when the Cavaliers won the right to select an Akron, Ohio, native named LeBron James at No. 1.

The 2003 lottery, not coincidentally, was the league’s first to be broadcast in prime time as an event unto itself. In its first season after taking over the N.B.A.’s television rights from NBC, ESPN/ABC transformed the lottery drama from a compact halftime endeavor into a 30-minute special before Game 3 of the Eastern Conference finals between the Nets and the Detroit Pistons.

Motivated in part by Williamson’s notoriety, ESPN has expanded its lottery coverage this year, commissioning 90 minutes of lead-in coverage and vowing to reveal the full draft order within 10 minutes of the start of the lottery itself at 8:30 p.m. Eastern in Chicago, the site of the N.B.A.’s annual predraft combine this week.

Of course, in 2003, Cleveland and Denver not only shared better odds at the top of the draft with their 17-65 records — 22.5 percent each to land the No. 1 pick — but also benefited from one of the deepest drafts in league history.

The Nuggets drew No. 3 but still came away with a future All-Star in Carmelo Anthony to cushion the blow of missing out on James. That draft featured two other players who could reasonably be billed as franchise cornerstones: Chris Bosh at No. 4 and Dwyane Wade at No. 5.

The draft class of 2019, by contrast, is generally regarded by talent evaluators as having two surefire difference makers, or three at best. Williamson and Ja Morant, the electric Murray State guard, are widely projected to go No. 1 and No. 2, no matter which teams lands those picks. The Canadian guard R.J. Barrett, Williamson’s Duke teammate, is next in line.

Yet the only certainty is that there will be no shortage of teams watching nervously — with the Knicks merely at the front of the anxious line.

Few teams know lottery anguish like the Dallas Mavericks. In 1993, after a wretched 11-71 season, Dallas fell as far as possible in the lottery while holding the best odds for the top pick and settled for Kentucky’s Jamal Mashburn at No. 4, missing out on Chris Webber at No. 1 and Penny Hardaway at No. 3. The following season, after going 13-69, Dallas again failed to get the top pick but mercifully wound up with Jason Kidd at No. 2.

In last year’s lottery, projected to pick third over all, Dallas slipped to No. 5 and ultimately had to surrender a future first-round pick in a draft-night trade with Atlanta to get the player it wanted: Luka Doncic. The Mavericks have a 6 percent chance at the No. 1 pick Tuesday night, and unless they land in the top five they must trade the pick to the Hawks to complete the Doncic deal.

In 15 trips to the lottery in franchise history, Dallas has never moved higher than its projected position — and has slipped six times.

It was no surprise, then, to hear the viewing plans of Dallas owner Mark Cuban for Tuesday night.