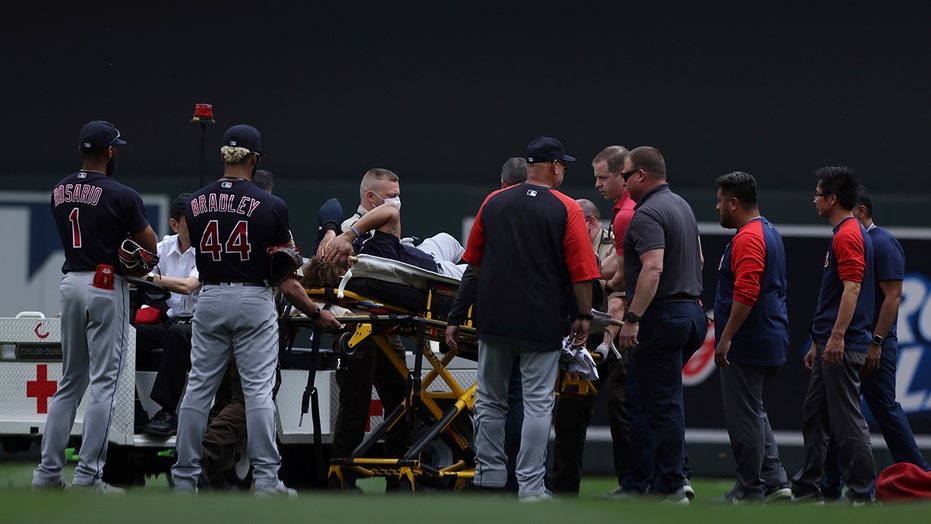 Cleveland Indians outfielder Josh Naylor was taken off the field on a stretcher Sunday after he collided with second baseman Ernie Clement during a game against the Minnesota Twins.

Naylor and Clement were running after a fly ball in the fourth inning when they ran into each other. Naylor tried to avoid Clement but ended up getting hit in the chest. Naylor got hit, went airborne, spun around, and landed on the ground hard. His right leg bent behind him and his sunglasses came off.

Naylor was clutching his leg as he went down and was banging his hand on the field.

Indians manager Terry Francona said Naylor suffered a broken bone but wasn’t sure which one.

The Indians, Twins and others reacted on social media.

There was a 12-minute delay before play eventually resumed.

“It’s hard. You saw the way he reacted. It’s hard to not react to that. Everybody’s certainly thinking about him. I was worried about Ernie, too, because Ernie had a pretty good cut on his chin,” Francona said.

He added that Clement only suffered a cut on the chin but is feeling “terrible” about Naylor’s injury.

“To be honest, it was really, really hard,” Indians catcher Rene Rivera said. “The way he reacted, it was heartbreaking, man. It’s hard. A guy like him, nice guy in the clubhouse, really a lot of energy, positivity and to see him go through that was really tough. You can tell the teammate, the full dugout was really shook.”

Cleveland would lose the game 8-2.