As the Magpies netball staff gathered at the Holden Centre after training to watch the Giants-Fever duel in Sydney, they knew by quarter-time that their season still had breath. An hour later, they learnt the challenging equation: seven points against the Melbourne Vixens on Sunday could deliver a finals place; all eight would confirm it.

As it was in 2018, Super Netball's top four will not be decided until the last of the 56 home-and-away games. The Vixens cannot move from third spot, but the fact they will have a say in whether they host the Magpies or Giants in next weekend's minor semi-final should add a touch more spice to events at Melbourne Arena. 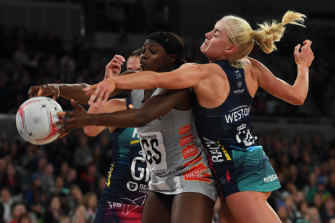 "The Vixens are a very proud club, and regardless of whether they can move up or down the ladder they'll be there to get a job done," said Collingwood's acting co-coach Nicole Richardson.

"Because of the rivalry between the two clubs, it actually might fire them up a little bit more knowing that they could be the team that knock us out of the finals. They would see it as an incentive; I would say that would be the approach they'd take."

Yet although the Giants' inability to sweep all eight points means the Magpies might still have a next week, rather than just a next year, it will still be a big task to win the game and at least three quarters – i.e. seven points and an eight-goal winning margin should cement things – against a Vixens side they trail 4-1 head-to-head.

Richardson and fellow assistant Kate Upton will be acting head co-coaches for the third consecutive week – and with a 2-0 record so far – ahead of the funeral in Sydney on Wednesday of Rob Wright's mother, Jeanette.

Kelsey Browne's ACL was another emotional twist in a tale that continues into a dramatic finale to what Richardson concedes has been "a very up-and-down rollercoaster-type season", but which in rounds 12 and 13 belatedly featured consecutive wins for the first time.

Richardson described as "absolutely massive” the fact the Magpies now control their own fate.

"For us it's huge," she said. "The hard part is going to be getting there and getting the result done on Sunday, but with the form that we're coming off, I believe that if we can get ourselves into that top four, we could actually do some serious damage in the finals.

The Vixens are adamant the lack of ladder-based incentive will not cloud their determination for an improved performance after suffering two of their four losses for the season.

"We have not had the two wins over the last two weeks that we would like – one, coming to the end of the season and two, leading into finals," said experienced shooter Tegan Philip.

"We want to make sure we can put out a solid performance this weekend and let people know that we're serious and we're here to go all the way and give this a really good crack. So we will be giving it everything we've got and playing it like it is a final for us, because having that kind of focus will set us up for actually playing in finals, which is another level in itself."

With the State Netball Centre the only local venue available for the semis, Melbourne Arena's season farewell is a Magpies home game, and the intensity of what is still a young rivalry is clearly apparent, nonetheless.

"It's a battle – neither team want to lose to each other, that's for sure," said Philip, with the first blemish for the Vixens a surprise 55-52 loss seven rounds ago. "There's probably that little bit extra grit that everyone has to really get the win – any time you play them, but especially this weekend."

Decision-making and execution were both issues as a 10-goal lead evaporated into a one-goal loss to the Lightning last Sunday, with Vixens great Sharelle McMahon, now the club's assistant coach, stressing the need to build connections and confidence ahead of the finals.

"I think there was some really great timing and confidence in attack in the first half, and I think the timing kind of left us a little bit in that second half when the momentum swing happened," McMahon said.

"When we've got our timing right and the strong driving into attack, that's when we're playing at our best, so that's what the focus will be."