Heightened expectations are so much the norm when Virat Kohli bats that they are virtually meaningless. When Kohli comes to the crease, the volume is permanently set to 10.

Sometimes, however, the elements of the contest come together to raise the Kohli dial to 11. So it was after lunch on the second day of the Perth Test. 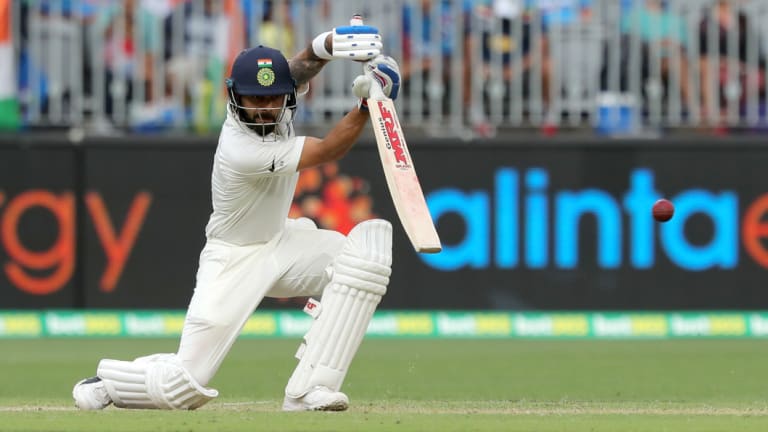 India, with a mountain to climb, had tripped over while stepping out of the bus. For nine hours of play, India’s bowlers had repeatedly failed to apply the most mental of the fundamentals, which was to aim the ball, just occasionally, at the stumps.

Their four seamers had collectively done it fewer than 20 times in the 108.3 overs of Australia’s 326, until, like the overdue punchline to a shaggy-dog story, four straight balls in 10 minutes did for the Australian tail.

Immediately, the Australian bowlers picked up the lesson. Mitchell Starc and Josh Hazlewood each took the shortest route to remove the Indian openers, and the visitors were 2-8 when Kohli made his entrance.

So impatient does Kohli often seem, it might be said that, for his peace of mind, the earlier he is batting the better.

Without having had to wait – the innings was 31 balls young when he came in – he projected his usual belligerence but, compared with Adelaide last week, he was also calm. No irritable fidgeting with his collar, no princess-and-the-pea annoyance from his rubber bat grip.

He had to be ready. While Cheteshwar Pujara enabled Kohli to avoid Starc first-up, Hazlewood was steaming in.

This was the contest we had been waiting for. While there had been much to enjoy in the first six days of this series, notably the tight meshing of the gears of competition between these two teams, what we had lacked was a sense of the best against the best, at their best, facing off under the highest pressure. We had it now.

Tight in defence, Kohli assessed the situation. If Hazlewood was going to bowl at the stumps, Kohli would take it.

The same ball that had speared through KL Rahul was clipped to the mid-wicket boundary. A full ball on the off-stump didn’t come to rest until Kohli had sent it to the fence at mid-off. Another whip of the wrists and a third boundary in four balls composed Kohli’s opening statement. Breathtaking.

Tim Paine’s counter-move was to introduce Patrick Cummins to replace Starc and Nathan Lyon to replace Hazlewood. Cummins tied Kohli up with a maiden and spots of rain fell.

For the next hour, Cummins and Lyon examined Kohli thoroughly. He played straight, he left the ball as adamantly as he hit it, and the temperature changed again.

Eye opener: Kohli leaves the field at stumps after batting India back into contention.Credit:Dave Hunt

Occasionally Cummins had him feeling outside the off stump. An inside edge onto the body was followed by an immaculate forward defence and then a hook along the ground to take him off strike.

Lyon enticed a leading edge, to which Kohli responded with a flaring cover drive – straight to the fielder. Asides and tangents developed within the overarching story, but throughout, the match felt like it was wholly at stake.

As the new ball lost its shine, the stakes continued to rise. Where earlier it was a case of Australia having the opportunity to remove Kohli and drive a stake through India, now it became a situation of trying to stop Kohli from hurting them.

Hazlewood came back on for Cummins, whose six overs, mainly at Kohli, had been impressively accurate. Oddly perhaps, Starc had to wait until after tea before first bowling at Kohli.

While Kohli coped with the change of pace, a flurry ensued at the other end when Pujara tickled a legside ball and Ajinkya Rahane came out and spent his first 10 minutes trying to get out.

But Kohli steadied him, withstood the Starc blitz, and continued building his innings and a new partnership. As the afternoon wore on, Kohli made batting look easier and easier when no doubt it was anything but. And the balance of the game tilted once again.