Zac Stubblety-Cook turned for the final lap of the 200m breaststroke final at the Australian Swimming Championships, surged off the wall, surfaced and heard the Adelaide crowd roar into life.

The world record was officially in play and the 23-year-old did not relent. He uncorked a signature booming final 50m to crush the field and the red line that formerly belonged to Russia’s Anton Chupkov (2:06.12s), set at the 2019 FINA World Championships. 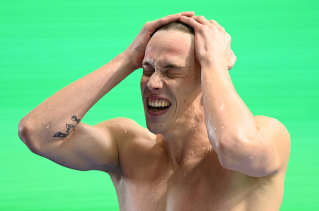 When he looked up, Stubblety-Cook was the first man under the 2:06 barrier, with his time of 2:05.95 the new global standard. An Olympic champion and now a world-record holder; it’s been quite the 12 months for the softly spoken Brisbane native.

“It’s a bit surreal. It hasn’t really sunk in, maybe over the next few days,” Stubblety-Cook said after the race. “I was hoping to swim fast and be close to my best. Obviously, I’ve thought about it [breaking the WR] but have never thought, that’s it, I want the world record. But it happened.”

Stubblety-Cook was one of the breakout stars for Australia at the Tokyo Games. A largely unknown quantity outside of swimming circles and an Olympic rookie, he progressed through the rounds like a veteran before a dominant victory in the final.

It was clear he was only trending upwards, but world records are never easy. And there has been a long drought of them in home pools in Australia for the male swimmers, with the last one falling back in 2008 when Eamon Sullivan broke the 50m freestyle mark twice in the Olympic trials before Beijing.

Now he stands to be the dominant force in the race heading towards the 2024 Olympic Games unless a new rival emerges quickly. Over the next few months, World Championship and Commonwealth Games gold medals are his to lose.

There were no crowds in Tokyo, so the noise from the stands sounded even sweeter for Stubblety-Cook. And with the speedy Matt Wilson, who briefly held the world mark in this event in 2019, lighting up the field for the first 100m, the race could scarcely have been set up more perfectly.

“Knowing Matt swims out pretty quick was always a bonus, I felt pretty good at the 100m. I knew I could bring it home pretty fast.

“It’s pretty special. I always had the goal in my mind to be the first man to go 2:05. I’m much more process-driven then outcome-driven. It’s a lot to wrap your head around.”

Stubblety-Cook has the 100m event to go although that hasn’t been his go-to at this level. But he wants to sharpen up his speed over the first half of his 200m races, which will only serve to put him in an even better spot to continue his winning ways.

And there is no reason Stubblety-Cook can’t lower this mark even further in Budapest, where he will take on a crack field that will give him even better hares to chase. But at the moment, nobody can stick with him when he goes through the gears with the wall in sight.