David Cheng, a racecar driver and an owner of Jackie Chan DC Racing, recalls the first time he crossed paths with Jackie Chan, the martial artist and actor. They met through mutual friends in 2015 to talk about other projects, but Chan began telling stories about when he came to Hollywood.

“One of his idols was Steve McQueen, so, obviously, I asked him if he’d watched a movie that Steve made about Le Mans,” Cheng said, referring to the 1971 film of the same name. “Jackie said, yeah, then said he’s a big fan of the race and had a lot of friends involved.

“He’d personally not gone to the race before,” Cheng said of Chan, “but, off the other topics and his interest in the movies, we started talking more about his interest in cars. He’s quite a fan of racing in general.”

In 2015, Cheng and Chan became partners in the China-based team, which competes in endurance races. Chan, who was not available for an interview, told FOXSports.com in 2016 that he had long had an interest in racing, but could not do it himself.

“I love to drive on the racetrack, but my company, my manager and especially insurance, they don’t want me to do it,” he said.

Chan said there had been no well-known driver from China, but then “suddenly David showed up.”

“He’s a young man who needs my support,” said Chan, who had roles in “The Cannonball Run” road-race movies. “So I got his back and said, ‘If you can become a champion, I will go to Le Mans with you.”

They became partners in a China-based team for endurance races, including the 24 Hours of Le Mans.

The team fielded four LMP2 cars last year at Le Mans and did not do as well, with a high finish of fourth in class and eighth over all. The team returns with two cars this year.

Ricky Taylor, 29, whose regular ride is in the WeatherTech SportsCar Championship with the Roger Penske team, said he had never met Chan, even though this will be Taylor’s second Le Mans with the team.

“He’s put his name on a really good car,” said Taylor, whose three-driver car had engine problems and did not finish the race last season. 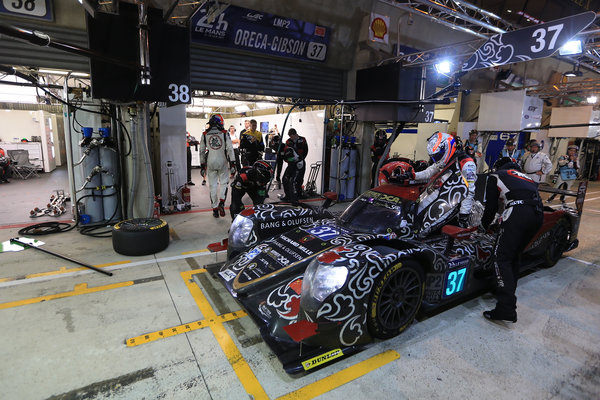 Cheng said that Chan brought a lot of extra attention to the team, “which helps us form a bigger fan base, especially in China, where motorsports are growing and evolving.”

Jackie Chan DC Racing participates in the F.I.A. World Endurance Championship, of which Le Mans is the season finale, and the Asian Le Mans Series.

Taylor, David Heinemeier Hansson, 39, of Denmark and Jordan King, 25, of England will drive one of the team’s two Oreca 07 Gibsons at Le Mans. The other will be driven by Ho-Pin Tung, 36, of the Netherlands, Stéphane Richelmi, 29, of Monaco, and Gabriel Aubry, 21, of France. This will be Tung’s seventh 24 Hours of Le Mans; he was in the car that won the LMP2 class in 2017.

The team places ads for Chan’s business projects on the cars, including Jackie Chan’s Cafe, a chain of coffee and tea shops.

“He doesn’t really have a role with the team, other than being the co-founder,” Tung said. “But he’s definitely rooting for the team, rooting for us. He always wants to stay for the entire race.”

Cheng said one reason Chan co-founded the team was to assist Chinese drivers. “Jackie helps with funding a lot, with a lot of the support for the team,” he said.

“Jackie comes to all the races he can make,” at least one a year, Cheng said. “Jackie’s still on quite a busy schedule. Unfortunately, he won’t be able to make it to Le Mans this year, but every year he always comes to the race at Shanghai. It just depends on which rounds are easier for him to access and when he’s available.”

Cheng told Sportscar365.com this month that the team will have only a single car, rather than two, in the F.I.A. World Endurance Championship next year because of the short gap between Le Mans and the 2019-20 W.E.C. season opener in July. The Oreca team led by Tung is only four points behind the leader in this season’s standings.

Taylor replaced Will Stevens as one of the drivers. Taylor said the Oreca is similar to the one he drives for the Penske team in the WeatherTech SportsCar Championship, but Le Mans presents different challenges than racing on road courses in North America.

“The hard thing about Le Mans is that the straightaways are just so long,” Taylor said. Because caution flags are used only in zones where an accident or breakdown has occurred, cars on other parts of the track don’t have to slow. “You’re just constantly up against the clock,” Taylor said. “It’s mentally exhausting.”

Taylor said he likes his team’s chances. And if it does as well as it did in 2017, it can hand Chan more racing trophies.

“With a name so familiar, not just in China but worldwide, the team receives a lot of attention now,” Tung said. “Everybody knows him from the movies, but he’s no stranger to motorsports anymore. This really was just a perfect fit for everybody.”