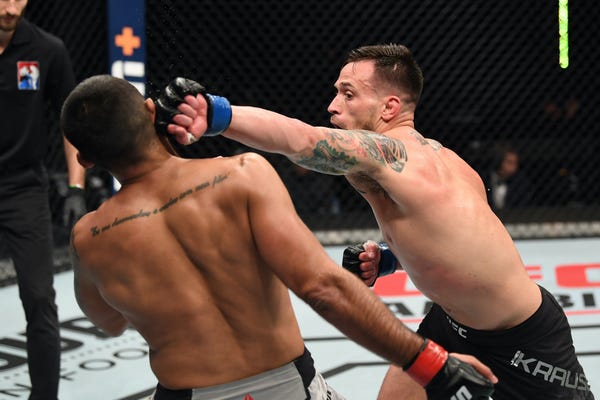 After the victory, when he spoke to reporters, which advanced his pro MMA record 28 wins (eight knockouts, 14 submissions, and six decisions) against eight losses, he appeared eager to fight Joaquin Buckley.

Buckley had posted a victory on Fight Island, the UFC's ongoing combat sports festival in Abu Dhabi, the weekend before Krause's 170-pound win over Silva.

Buckley captured the internet's imagination when he landed a jump spinning back kick that knocked out his opponent Impa Kasanganay in an instant.

It was an unconventional move that has yielded a knockout only four times in UFC history and stunned Octagonside onlookers who were photographed open-mouthed and with their hands above their heads.

The UFC's social media channel called it the "most unbelievable" knockout in its entire history.

The UFC boss Dana White even received a call from the US President Donald Trump, who said to him: "Oh my God, this Buckley knockout … have you ever seen anything like this?"

White responded: "Mr. President, nobody has ever seen anything like this. It's the most viral thing on the internet."

Krause told the media at a post-event press conference inside the Flash Forum on Fight Island was indeed "a beautiful knockout" but claimed people are now overrating the fighter's abilities as Buckley is "a clown."

"The dude's a s— box," Krause said. "He's from my neck of the woods and all he does is sit on social media and talk s— all day.

Krause even told us that he would take a fight against Buckley at the middleweight limit of 185-pounds if it meant getting a chance to "whoop his ass."

Buckley's Octagon return is booked for UFC 255, a November pay-per-view event when the UFC returns to its Las Vegas base.

Krause's next fight is yet to be determined.