He was there when Jack Nicklaus won his final Masters in 1986. He's covered dozens of Final Fours, the Super Bowl and anchored CBS Sports' coverage of the PGA Tour for three decades.

But the most memorable moment of Jim Nantz's broadcasting career came on Sunday: Tiger Woods' own memorable Masters win was "the best event I’ve ever covered," Nantz said in a Q&A with The Washington Post. "It’s been 48 hours since it ended, and I’d say it’s going to feel about the same 10 years from now."

Nantz compared Woods' first major championship since 2008 and first Masters win since 2005 to Nicklaus' 1986 victory, with one difference. While Woods was in the last grouping on Sunday, Nicklaus was ahead of another four groups, Nantz recalled. Sunday "had the scene" at the final hole, he said. 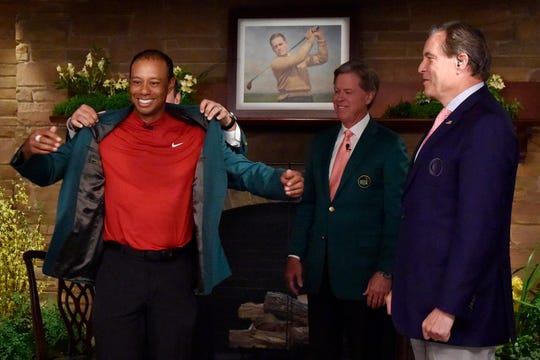 "We didn’t get to have Jack have a celebration scene," Nantz told the newspaper. "Tell me when you’ve seen a better celebration scene than this one Sunday? The chanting and the moment with his family, I’d have to rank that number one."

Woods' final tap-in putt to seal the Masters was, Nantz said on the telecast, a "return to glory." Twenty-two years earlier, Nantz called Woods' first Masters win — an unforgettable romp through the competition in 1997 — "a win for the ages."

In the Q&A, Nantz said he had prepared the line in 1997, since Woods held such a commanding lead entering the final round, but ad-libbed Sunday.

"I didn’t know when it left my lips, but I think it’s been pretty good based on the hundreds of texts I’ve gotten that thought 'glory' captured the spirituality of the moment," he said. "That captured the glory that’s in his life, the fact that he’s a remade man — at least from what we can tell."

That was followed by nearly three minutes of silence. Asked in the Q&A whether that was a conscious choice, Nantz called it "an easy one." (Fifteen years ago, Nantz remained silent for "20 minutes" during Arnold Palmer' final hole in Masters' competition," he told The Post.)

"And I feel very fortunate to have been in that spot. It inspired millions, watching people see what he did. And the visuals that came with it — it was a showpiece for the world that I think is relatable to people and shows the power of the human spirit. I’m veering off message now, but he could touch just about every person that saw that. It’s spiritual, and I’m into that."