JONNY BAIRSTOW scored his first Test century for more than three years on a tumultuous, topsy-turvy day for England.

Bairstow’s innings of 103 not out was chiefly responsible for England recovering from the depths of 36-4 in their first innings. 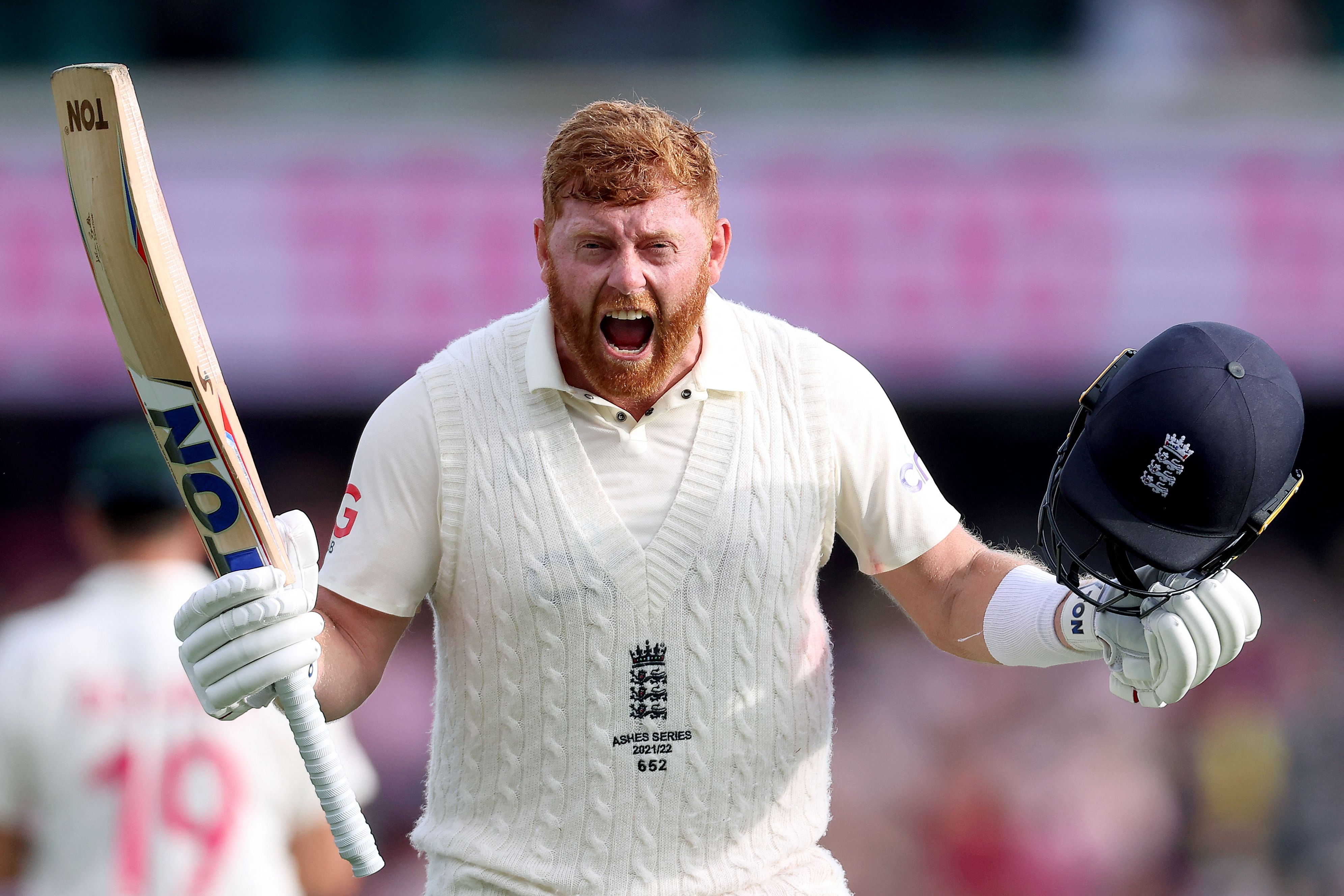 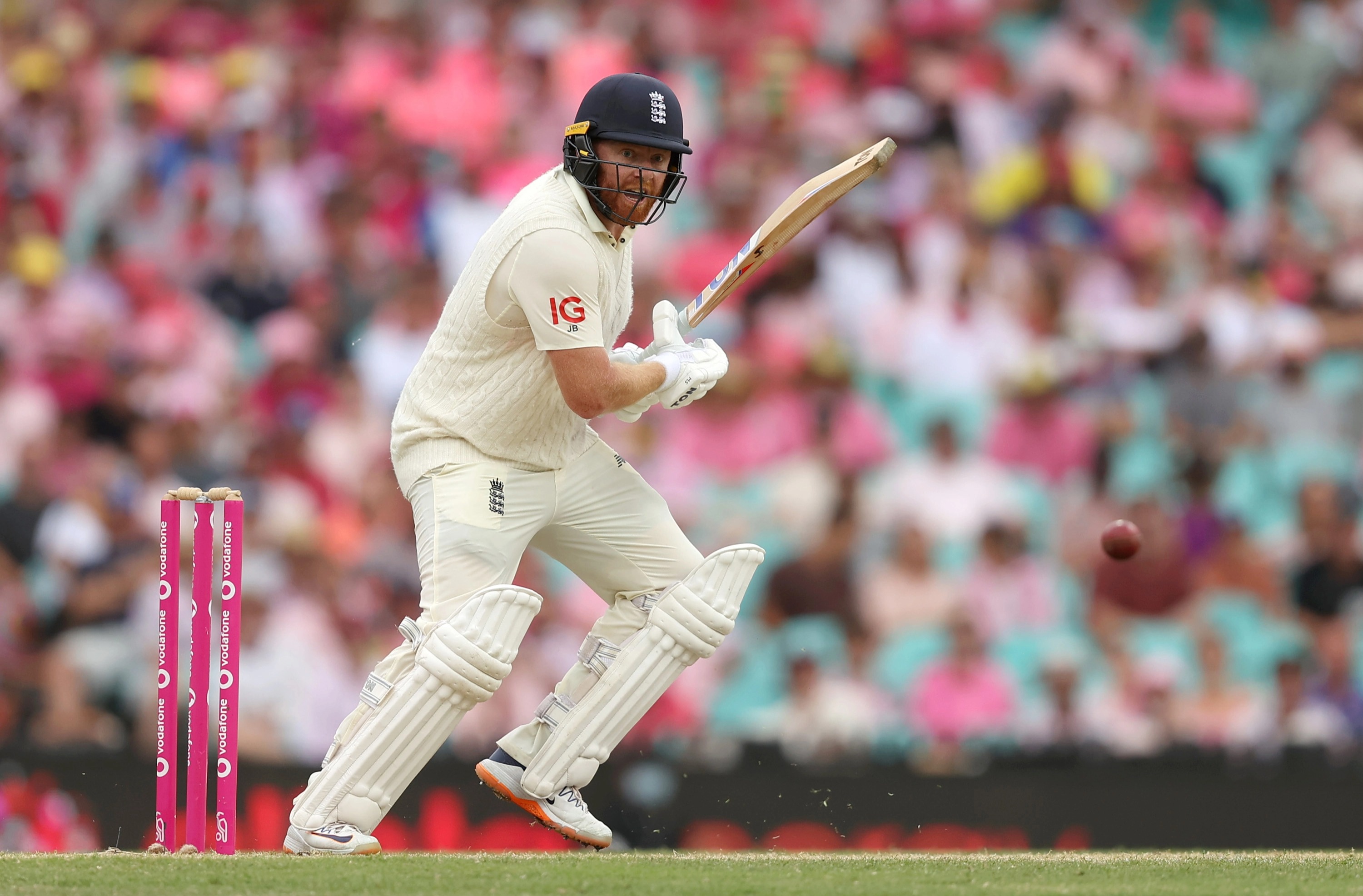 It was England’s first hundred of the series and showed the Aussie bowlers can be mastered.

Bairstow received excellent support from Ben Stokes, who winced with pain almost every time he hit the ball because of a side strain.

And Stokes enjoyed one outrageous slice of good fortune when he was bowled – and the bails didn’t fall off.

Mark Wood had some fun, too, and hit Aussie skipper Pat Cummins for three sixes – including two in two balls – as England finished with 258-7.

But they are still 158 runs behind the Aussies and struggling to avoid another defeat. At least they showed some spirit with their most aggressive batting of the series.

They also showed some courage with Bairstow among those struck several times on a pitch of uneven bounce. He needed lengthy treatment after a blow to the thumb.

Bairstow looked like being discarded as a Test cricketer after this tour but this hundred – his first since one against Sri Lanka in Colombo in November 2018 – might prolong his career.

He reached three figures in the final over of the day and his ninth Test century came from 138 balls, a decent rate of progress.

England made their usual terrible start with the top four all failing. Haseeb Hameed again resembled a walking wicket and was dropped – a straightforward chance for wicketkeeper Alex Carey moving to his left – before being cleaned up by Mitchell Starc for his fifth single-figure score on the trot.

The ball from Starc was a belter but Hameed left a huge and inviting gap between bat and pad.

Zak Crawley had already been caught off a no-ball the previous evening and was dropped at short leg before he was bowled by Scott Boland.

Again, just like Hameed, the ball sliced through Crawley’s gate. These guys really need to tighten their techniques. 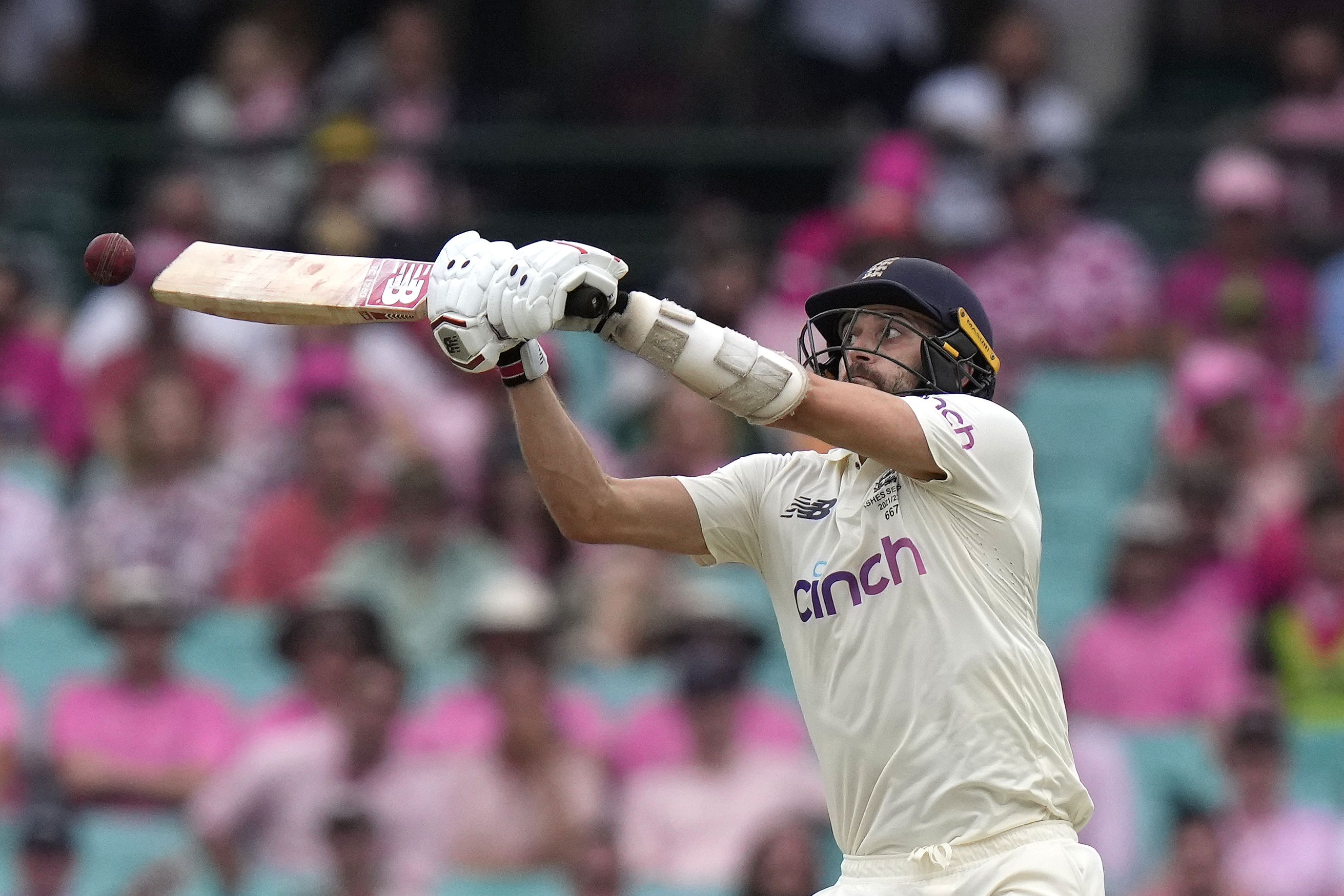 Root registered England’s first duck of the year when he aimed a back foot slash at Boland, edged and was well caught by Steve Smith leaping at second slip.

Root is looking more and more distracted by the shortcomings of his team. Despite his prolific year in 2021, there are signs his batting is starting to be affected.

That’s one good reason why he should resign as captain at the end of this tour.

Dawid Malan was hit on the glove twice by all-rounder Cameron Green and then obligingly guided a catch straight to leg slip. It was almost as though he didn’t realise the fielder was there.

England had lost three wickets for no runs and altogether went 71 balls without adding a run either side of lunch.

Following his remarkable figures of 6-7 in the second innings in Melbourne, Boland had taken 2-0. That’s an aggregate of eight wickets for seven runs spread across 43 balls and two Test matches. 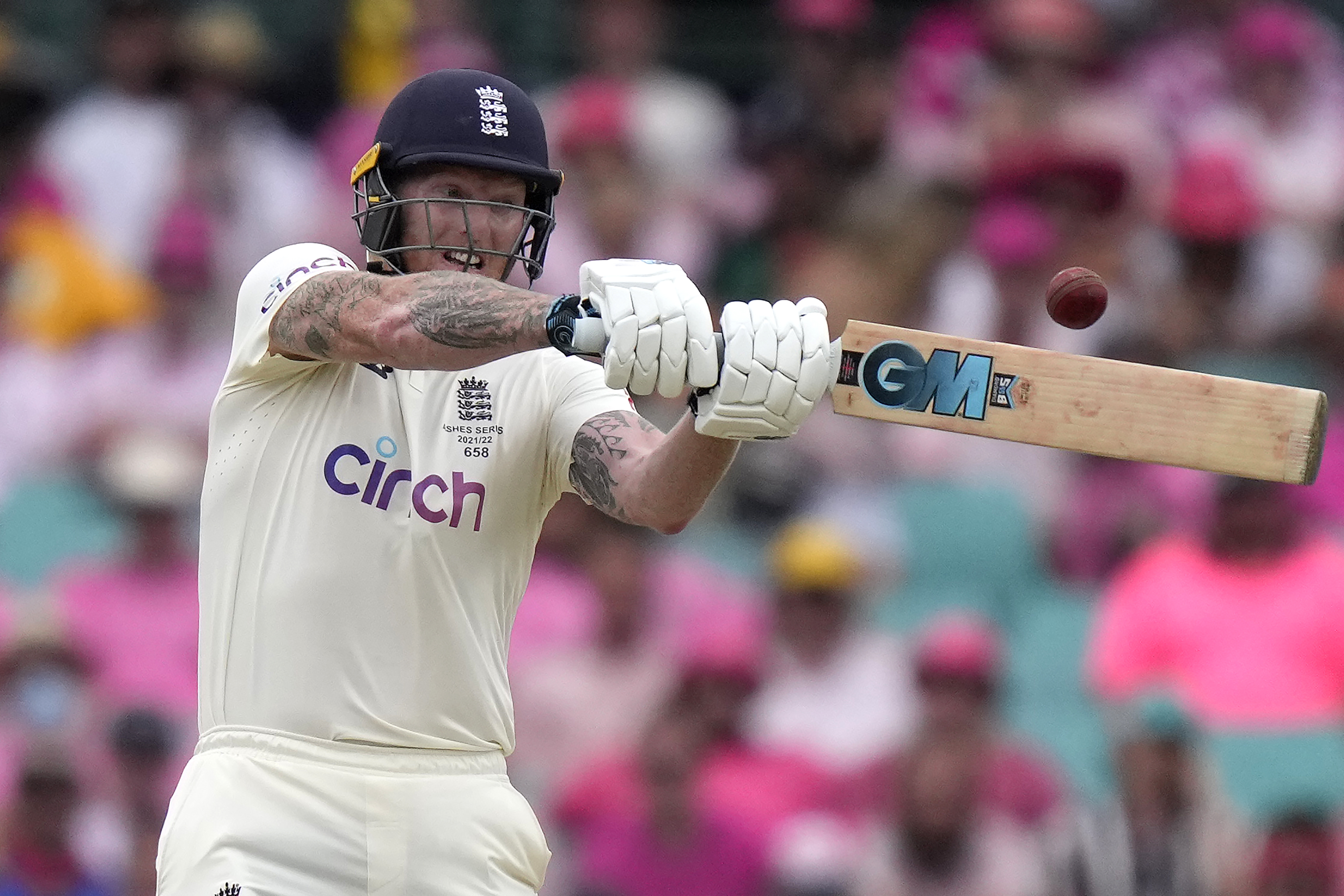 But Boland later went to hospital for a scan on his side after falling over in his follow through delivering the final ball before tea. No damage was detected.

England were 36-4 and in a right state. But, remarkably, Stokes and Bairstow batted through the afternoon session.

Stokes on nine was dropped when Pat Cummins failed to hold a return catch. Then came the Durham all-rounder’s extraordinary slice of luck.

He offered no shot to Green and there was a muffled appeal for lbw because the ball had clearly hit something. Umpire Paul Reiffel raised his finger.

But Stokes knew there was no contact with his pad and reviewed immediately. The replays showed the truth – the ball glanced the stumps but the bails remained in place. Not out. And damn lucky.

Stokes looked in pain from the side strain he suffered while bowling on day two and he was struck on the leg and hand, just to add to his bruises. 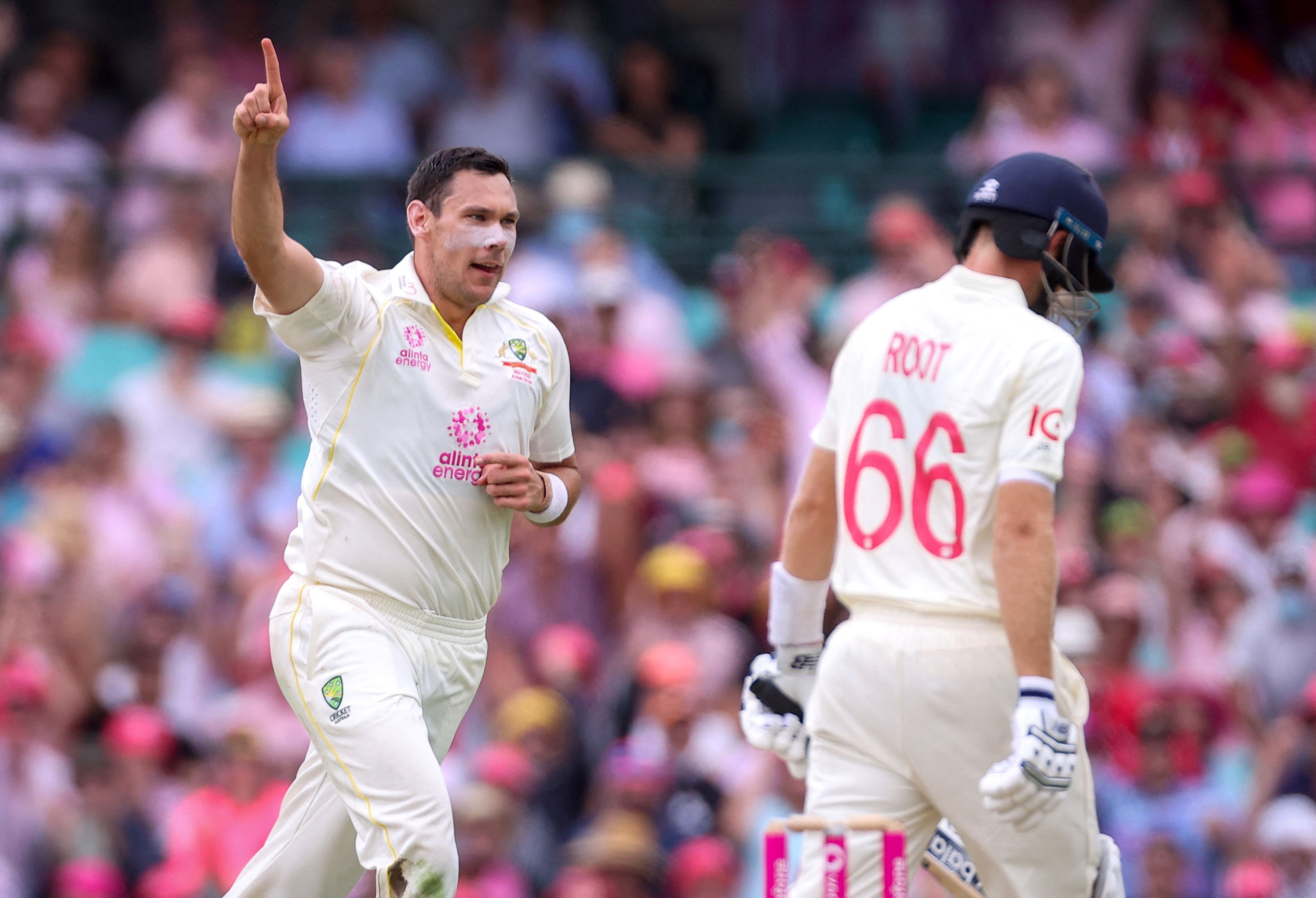 But he was finding some fluency after a disappointing tour with the bat. Stokes struck Starc for three fours in three balls and lofted spinner Nathan Lyon for six over extra cover.

Stokes was eventually nailed lbw by Lyon and it was so plumb that Stokes walked on 66.

Jos Buttler’s shocking tour continued when he tamely chipped a catch to cover and was out for a duck.

But Bairstow and Wood put on 72 for the seventh wicket and Bairstow has the chance to add more on day four.