The Los Angeles Chargers could have played it safe. Ahead by 10 points with under four minutes left against the Jacksonville Jaguars on Sunday, the team might have handed the ball off and run down the clock to finally end a four-game losing streak.

Having Justin Herbert under center, however, has changed the team’s math. On third-and-5 at the Jaguars’ 34-yard line, offensive coordinator Shane Steichen ended a timeout by giving the rookie quarterback the go-ahead to throw to receiver Keenan Allen, who gained 8 yards and a new set of downs. Soon after, Herbert knelt out the clock to earn his first N.F.L. win.

The decision — that a Herbert throw was as safe a bet as a carry, even on a rushing down — was emblematic of how Chargers coaches have come to regard the 22-year-old who, technically speaking, wasn’t supposed to be their starter yet.

Herbert was thrust into the spot in Week 2 after Tyrod Taylor, the starter Los Angeles had signed to a two-year contract that included a reported $11 million in guaranteed money, had his lung punctured by a team doctor injecting a painkiller before game time. In Taylor’s stead during an afternoon game broadcast widely, Herbert pushed the Super Bowl champion Kansas City Chiefs to overtime, running for a 4-yard touchdown on his first N.F.L. drive and ultimately finishing with a better passer rating (94.4 to 90.9) and more yards (311 to 302) than Patrick Mahomes, though not the win.

The unexpected performance turned heads toward Herbert, who last spring was rated the third-best pro prospect at quarterback, behind the No. 1 draft pick Joe Burrow and Tua Tagovailoa, both of whom were charismatic leaders in college. Now, having thrown for 1,542 yards in his first five N.F.L. games, a career start that is second only to Cam Newton’s in 2011, Herbert has asserted himself as a game-changing talent worth building around.

“There’s nothing passive about how he plays,” said Daniel Jeremiah, a former N.F.L. scout and an NFL Network analyst who is a color commentator on Chargers’ radio broadcasts. “Other teams try to protect their young quarterback, try not to destroy their confidence.” The Chargers coaches said, “let’s run your stuff.”

Herbert, who is not prone to hyperbole, has tried to play down attention he might attract.

“One of the great things I’ve been taught is to not let it affect me,” Herbert said. “Everything that I’ve been focused on is what’s been said inside this building, or by my parents or previous coaches. I’ve done a good job of staying away from the noise.”

When Los Angeles drafted Herbert sixth over all, the plan was for him to sit and observe Taylor for a season. Herbert had a 29-14 record in college and became only the second Oregon quarterback to throw for over 10,000 yards and score more than 100 touchdowns, despite a lack of big-playmaking receivers, but he did not have to take many risks in the Ducks’ rush-heavy offense.

Herbert was the second-tallest quarterback measured at the scouting combine in February, and also one of the heaviest. But he ran the 40-yard dash in 4.68 seconds, the fourth fastest time among quarterbacks, catching the eye of Chargers Coach Anthony Lynn.

“For a man that is 6-foot-6, he’s very nimble,” Lynn said. “In today’s N.F.L., with the speed of defenses, that’s pretty important. So a guy that can do both, throw from the pocket and move and extend plays, that’s a pretty unique skill set to me.” 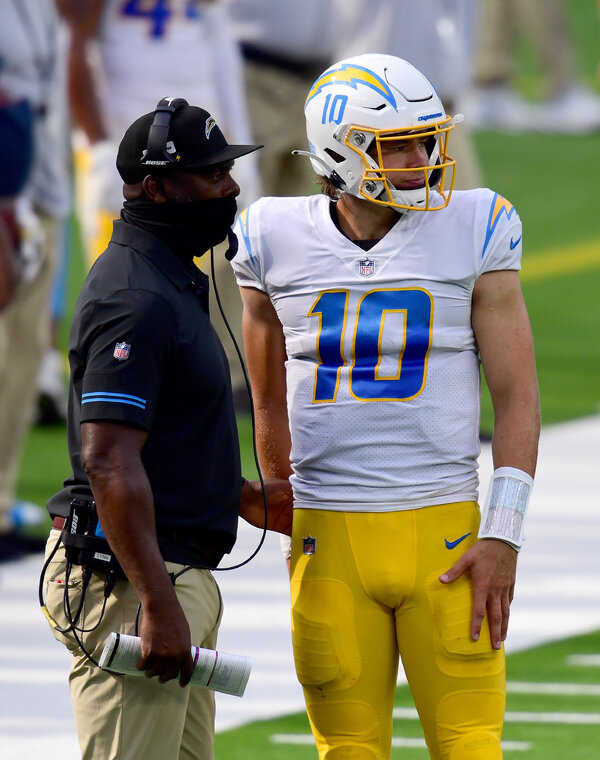 Herbert’s talent has been a windfall for the Chargers, who in addition to losing Taylor have been without their top rusher, Austin Ekeler, and three offensive linemen. Searching for a spark, Pep Hamilton, the Chargers quarterback coach, and Steichen have encouraged Herbert to play aggressively, running when needed and throwing to receivers in tight windows.

He has responded with the best quarterback rating in the rookie class (74.4, good for 12th over all in the league) and emerged as a running threat that can keep defenses honest. Herbert has 121 rushing yards and two touchdowns through Week 7 and one highlight run on which he flattened Damien Wilson, the much heavier Chiefs linebacker, on a scrambling run to the sidelines.

Coach Anthony Lynn, who had previously said Taylor would keep his job after returning from the injured reserve list, named Herbert the starter in early October, after he had played three games.

“I wanted this to play out, and I’ve seen enough, and I wanted to go ahead and make it official,” Lynn said.

Still, Lynn has been wary of overloading the rookie with too many tempting offensive dares. He said that Philip Rivers, the former Chargers quarterback, used to go to the line of scrimmage with three different options for plays, too much to expect from a rookie. Instead, Herbert is asked to review his first, second and third passing options within one play call, based on his read of the defense.

So far, Herbert has shown the ability to gamble safely with the offense entrusted to him, racking up a 67.4 percent completion rate and a four-to-one ratio of touchdowns to interceptions.

“He throws the deep ball real well, throws the intermediate stuff well, he’s obviously very athletic,” said Vic Fangio, coach of the Denver Broncos, who face the Chargers on Sunday. “They’ve done a good job coaching him and adapting their offense to his skill set.”

Another part of Herbert’s development was left purposefully uncomplicated: his time off the field. Having grown up in Eugene, Ore., within a mile of his college stadium and with two brothers who doubled as his workout partners in the off-season, Herbert has tried to re-create that cocoon in Southern California. Despite his $610,000 salary and $4.2 million signing bonus, he shares a house with two other rookies, including one from the practice squad. His diet hasn’t changed much either, still relying heavily on Subway sandwiches and Domino’s pizzas.

What has changed, though, is Herbert’s growing list of accomplishments and, with them, the attention. Just don’t expect him to crow about it.

“I don’t think I’ve changed my game any,” he said. “I think I’ve just kind of grown and developed and I have a better understanding of the game.”